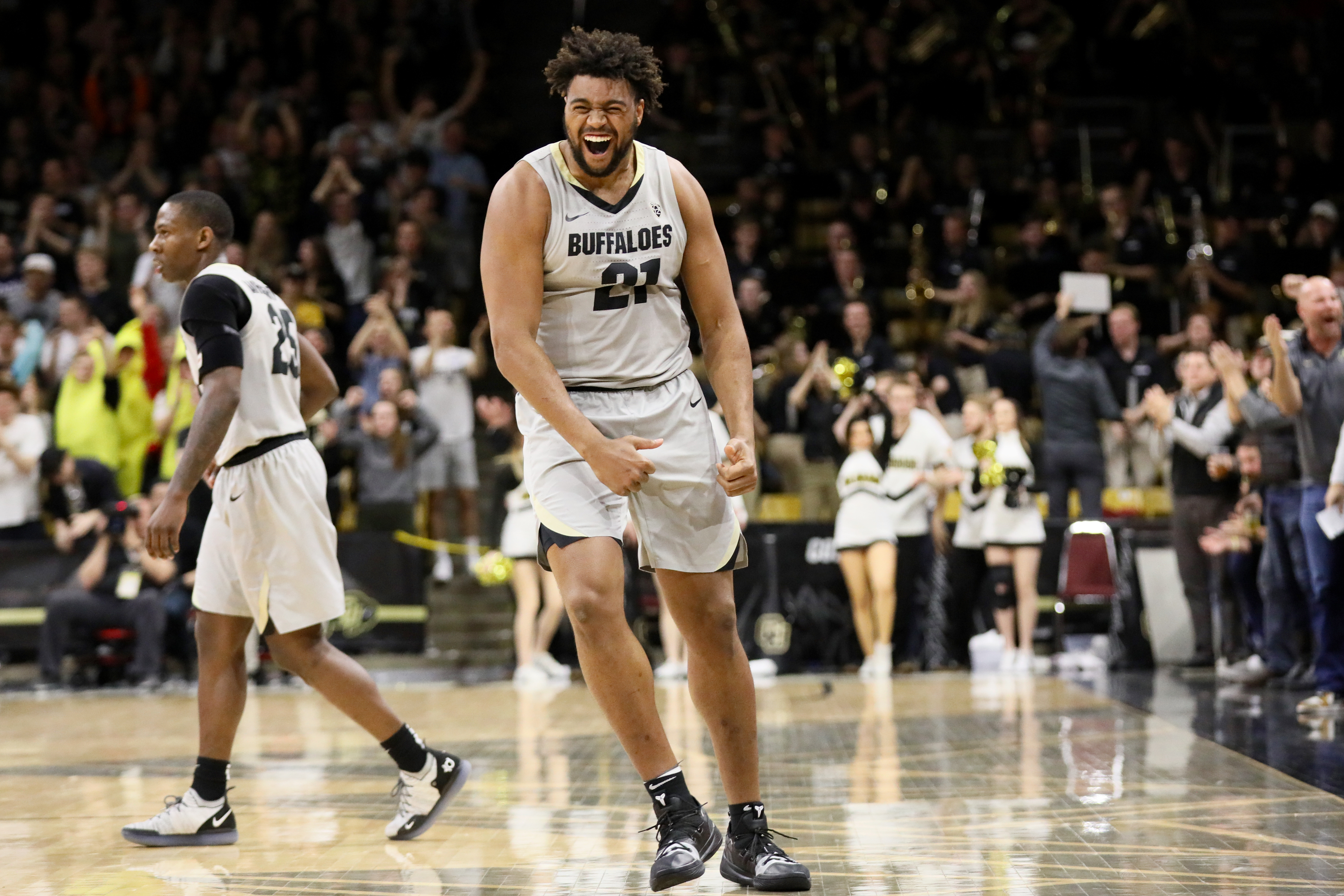 Freshman forward Evan Battey reacts to a call during the final minutes of play at the CU Events Center. March 9, 2019 (Nigel Amstock/CU Independent)

On a Saturday afternoon at CU Events Center, the Colorado Buffaloes took a while to play to their potential and it for awhile it looked like they would lose on Senior Day, but thanks in large part to freshman forward Evan Battey, the Buffs prevailed and won, 78-67.

These were not the Buffs that put on an electrifying performance against UCLA Thursday night. In the first half Colorado gave up easy second chance opportunities, free throws and rebounds that are difference makers in physical games such as this one.

However, there was one silver lining and that was without a doubt Battey.

“He emotionally lifts those guys up… he brings a lot of energy,” head coach Tad Boyle said.

Battey had a challenge down low on both sides of the court especially on offense because in order to get the ball to Battey, Colorado had to penetrate USC’s zone. The Trojans zone was similar to UCLA’s but USC was double-teaming forwards if the ball was in their hands.

On Thursday, the Buffs broke the Bruins’ zone with shooting and they caught fire. However, the Buffaloes’ shooting was subpar on Saturday and the only way to break the zone was to penetrate it and make the offense work inside the paint.

“We wanted to go after them and get them into foul trouble because without them they are a different team,” Boyle said.

With the ball in his hands Battey led the Buffs in scoring in the first half with 12 points, and ended the game with a season-high of 21. Those points came from either posting up and grinding against USC’s two big men or from simple jumpers a few feet away.

A forward’s effort often goes unnoticed but in a game that was as physical as this one, Battey got the crowd on its feet when the game seemed out of reach. For example, in the final seconds of the first half Battey got the ball low and went to work. His patience on the block paid off as he scored the final basket of the half and got the Buffs’ deficit to within seven.

On defense, his performance initially was cleaner than it has been in the past. Battey picked up a foul quickly in the first half but he only picked up one to start. He had the presence of mind to move his feet and not bring down his hands as USC was shooting which typically contributes to Battey’s fouls during a game. Battey played physical but he was smart about it on defense because the Buffs needed his size.

“I was just trying to make it as has hard for him to catch as possible,” Battey said. [I tried to] really bother him and be a constant nag when [Rakocevic] has the ball and when he doesn’t have the ball,” he said.

He boxed out some of USC’s tallest to either get over the back fouls or a Buffs’ fast break would begin. Battey brought the physicality on defense because early on USC was winning the physical aspect of the game.

But Battey could not be perfect forever. He picked up two more fouls in the second half and had to sit for awhile because Boyle and the Buffs would need him later.

“He is a hard guy to officiate because he is so big,” Boyle said.

With Battey in foul trouble, his teammates had to pick up some of the slack and go to work. On Saturday, the CU Events Center saw the powerful dunks of sophomore guard/forward Tyler Bey, the shooting of freshman guard D’Shawn Schwartz, and the talent Wright IV has at running the offense.

While the Buffs got their heads in the game, USC was closing the gap and hoping take the lead. Boyle had to put his big man back in, but he would pick up his fourth foul after a great effort on offense.

Battey put in the effort on both ends of the court for his teammates to follow suit and do their part. At his position, Battey is not often recognized for his dirty work, during a game but he played an important in the Buffs 78-67 victory against the Trojans.

At the beginning of the game when everyone on the court lacked the energy to play to their potential, it was Battey who pumped his team up and got them to where they needed to be.

Center for Inclusion and Social Change holds event to...