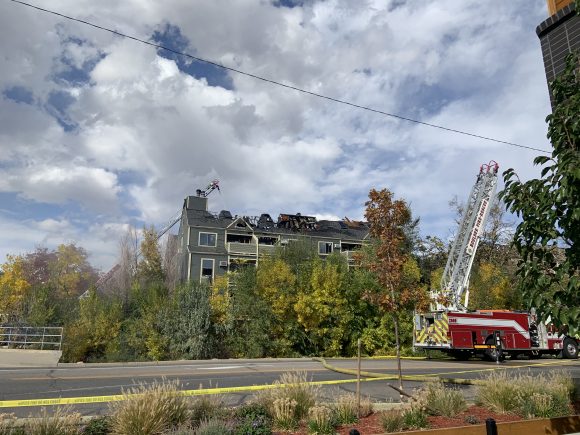 A view of a fire truck and one of the building that was damaged by the fire on Pearl Street. Oct. 15, 2021 (Henry Larson/CU Independent)

Early in the morning of Oct. 19, Boulder Fire and Rescue responded to a large fire that started in an apartment complex near Pearl and 23rd Streets.

The city first received a call about the fire at roughly 3:32 a.m. and firefighters responded to that call after seven minutes. By 9 a.m., firefighters had extinguished the worst of the blaze, although the roofs of the buildings had caved in.

83 units were affected by the fire, though there have been no reported major injuries. Boulder Emergency services said that there were few minor injuries that were treated on the scene. There has yet to be a complete determination as to if anyone was harmed and Boulder Police are actively looking to conduct interviews with anyone who has been impacted by the fire.

At a press conference held at 3 p.m. on Tuesday, Boulder Emergency Services Public Information Officer Dionne Waugh said that the investigation into the cause of the fire was still ongoing.

“Fire Investigators have not been able to get into the building,” she said.

Firefighters are concerned about hotspots that still remain in the three buildings that were affected by the fire and were seen continuing to spray the buildings with water and break windows in certain areas.

The area around the damaged buildings was closed through Monday and part of Tuesday.

If you live in the building or were in the area at the time of the fire, contact Detective Sharon Ramos at (303) 441-3323 if you have not already spoken with police.

CU announces the spring semester is expected to stay...