No. 24 Buffaloes drop heartbreaker to No. 11 Oregon, bounce back with a sweep over Oregon State 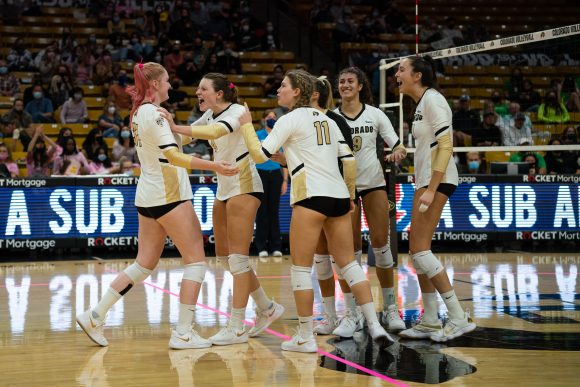 The University of Colorado Women’s Volleyball team had a rough week before taking on Oregon and Oregon State over the weekend. With drama and injuries within the locker room, the Buffs needed to show their resilience.

Following complications with losing multiple players through the week, Colorado took on a tough opponent in No. 11 Oregon on Friday night. Prior to the Friday matchup with the Buffs, the Oregon Ducks were 11-1 on the season.

Multiple outside hitters had to step up their game after the indefinite suspension of leading hitter Leah Clayton. Sophomore outside hitter Maya Tabron and junior outside hitter Jill Schneggenburger made a big impact with 12 and 11 kills apiece.

Despite the strength the Buffs showed on Friday, they took the first set of the match before dropping the next three, giving the Ducks a 3-1 win.

However, the Oregon matchup provided critical experience with a new starting lineup, which helped prepare the Buffs for a home matchup against the Oregon State Beavers on Sunday.

When Sunday came, the Buffs swept the Oregon State Beavers. The Buffaloes are now 11-2 in their season, ranking them at 24th in the nation. The win has made the Buffs 2-2 in Pac-12 conference play.

Sophomore outside hitter Maya Tabron led the team with 13 kills, two blocks, and an ace.

“In general, we passed well, and we served well,” said Tabron. “That made it a lot easier for Jenna to set up all the hitters,”

The CU team was in the lead throughout most of the first set, which led to OSU calling two timeouts. Eventually, the set ended with the Buffs up by nine points with a kill by Tabron.

OSU adjusted in the second set with both teams at neck and neck with each other. The teams were tied at 22-22, but ultimately the Buffs triumphed past the Beavers taking the set point. Sophomore defensive specialist Morgan Riddle’s serve with a volley in between sealed the set win for the Buffs with a kill by Kuehl.

With only one more set win needed to win the match, the Buffaloes led on a four-point run almost instantly. The CU lead eventually forced the Beavs into a timeout at 14-8. However, the timeout did not stop the Buffs’ momentum as they secured match point with a block and resulted in a game sweep.

“We’ve done a really good job at coming together as a team since it has been stressful this week, lifting each other up and being there for each other,” said Kuehl. “That’s helped us a lot.”

While the Buffs showed an impressive performance against the Beavers, they will need to focus on their future conference matchups as the season progresses.

“We’re looking to continue to build and continue to get better going on the road in the Pac-12. It’s always tough, especially against two really good teams,” said head coach Jesse Mahoney. “We’re going to have to continue to grow.”

The Buffaloes will have a busy weekend as they play on the road during their next two matches against a ranked UCLA team on Friday, Oct. 8 at 9 p.m. MST followed by a match against USC on Sunday, Oct. 10 at 2 p.m. MST.

Center for Inclusion and Social Change holds event to...