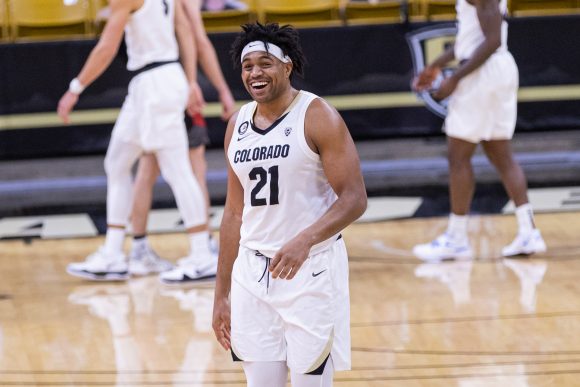 Junior forward Evan Battey reacts to the Buff bench during the second half of play at the CU Events Center. Dec. 16, 2020 (Nigel Amstock/Rivals)

As the trees begin to cover Boulder’s streets with their brightly colored leaves, that usually means two things are in Boulder’s near future. Snow is on the way and the University of Colorado’s men’s basketball team’s season is just around the corner. While the snow is still lurking, the Buffs, on the other hand, have had two weeks of practice, all set to shopping for a hoop and, on Tuesday, Oct. 19, held their annual media day.

With only two scholarship seniors on the roster, the Buffaloes are a talented but very young and inexperienced team. This year, the two upperclassmen, senior forward Evan Battey and senior guard Elijah Parquet, have more on their shoulders. Both players are tasked with leading their respective positions and the team as a whole. Parquet will lead the Buffs’ trio of freshman guards, Julian Hammond III, KJ Simpson, and Javon Ruffin. Head coach Tad Boyle, entering his 12th season at the helm of Colorado, emphasized the importance of the leadership Parquet brings to the court, especially in helping the team’s young talent grow.

“I’ve really challenged Eli,” said Boyle at media day. “Get the perimeter guys, and get them right. “Talk to them, encourage them, challenge them, go at them every day and let them know what the standard is.”

“I’ve asked Evan to do the same thing with Lawson,” said Boyle. “What he’s done to help Lawson grow and compete, and get better. Lawson, defensively as post guy, he’s as good as we’ve had. A lot of that is because he sees what Evan does every day. Lawson’s such a quick learner, so I want Evan to take those bigs, kind of challenge Jabari, Tristan, and Lawson. That’s why leadership is so, so important to this team, and we’ve got two guys (Parquet and Battey) that are capable.”

With so much youth on a roster, leadership and growth will be instrumental in CU’s success this season. Parquet and Battey will be crucial in providing leadership off the floor while also leading through their play on the court. Boyle stressed the importance of having some younger players, particularly freshmen, step up and provide quality minutes throughout the season.

“I told Julian (Hammond III) I told KJ (Simpson), I told Javon (Ruffin), I told Lawson (Lovering) that I am not going to coach you like a typical freshman,” said Boyle. “We need a couple of them to step up and be ready when their number’s called. And that’s difficult. We need a couple of guys to step up and play minutes, so I have to coach those guys harder than I coach a normal freshman.”

“Tristan is a guy who can play multiple positions offensively and guard multiple positions defensively,” said Boyle. “Tristan da Silva can do a lot, handling the ball, passing the ball. We’re challenging him every day to rebound the ball, stronger and tougher. He can put the ball on the floor, and he plays with great pace. Tristian is the guy nobody talks about who has a chance to have as good a year as anybody on our team this year. We’re going to need him to be on the floor as much as possible.”

Walker saw more of the spotlight last season, especially during his performance against Georgetown in the NCAA Tournament, where he went 5-5 from behind the arc. For Walker, the goals remain the same, getting back to the NCAA Tournament and being a top Pac-12 team. As one of Colorado’s starting forwards, Walker’s emphasis has been taking charge in the rebounding department this offseason.

“I’m kind of disappointed in myself right now because I haven’t been rebounding like I want to,” said Walker at media day. “The focus going forward for me is going back to the offensive rebounding I’ve been doing. Defensive rebounding should be the main emphasis right now. Forget the score and forget everything else, let me work my way get basics down, then scoring will come.”

One other key player for the Buffs for the 2021-22 season is sophomore guard Keeshawn Barthelemy. McKinley Wright IV was a stalwart at the point guard position for the Buffs the last few years, and filling his shoes is no easy task. Barthelemy’s filled in well when Wright missed time last season, so Boyle knows he is capable but understands that taking the pressure off a young guard can also benefit the team.

“I don’t want to put it all on him (Barthelemy)” said Boyle. “We’ve got two freshmen guards in KJ Simpson and Julian Hammond, who are fully capable as well of running the team and playing point guard. We’ve got three capable point guards, so I look at it as a three-headed monster.”

Colorado will play two exhibition games before the season officially gets going on Nov. 9 against Montana State. The Buffaloes play Colorado School of Mines Wednesday, Oct. 27 at 7 p.m. MT at the CU Events Center, which will give fans their first opportunity to see the Buffs in over a year.