The Schanfar Side: (Enlarged) food for thought — why we should rethink GMOs 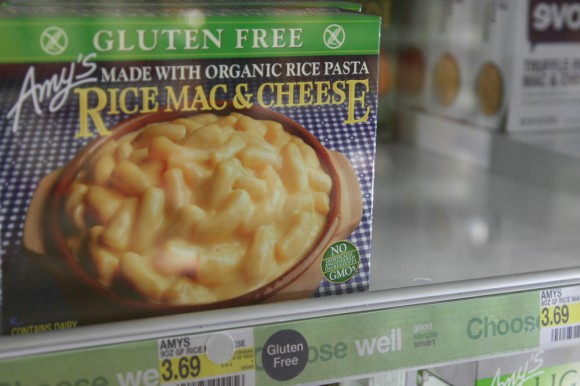 A box of Amy’s Mac & Cheese sits in the refrigerated aisle at the Target on Pearl Street. Amy’s Kitchen supports non-GMO food and proudly displays it on the green label in the bottom right corner of their boxes. (Jade Lang/CU Independent)

“The Schanfar Side” is a weekly opinion column about the environment.

The American public is exceptionally good at hopping on the bandwagon.

There’s nothing wrong with the public’s frequent interest in pining for selective cultural hot topics. In fact, it’s often the incredible speed and passion of public opinion that leads to important societal changes, from the successful change of public perception on tobacco to the push for more stringent safety standards for industrial workers in the early 1900s.

However, there are times when public opinion is unfortunately wrong. When the public’s extreme susceptibility to scientific reports and celebrity endorsements leads them far from the truth. The economic powerhouse of legalized marijuana was once publicly considered the choice drug of failures and misfits, states in the southern U.S. still widely allow the employment of corporal punishment in schools despite its proven negative effects on children, and even today, somewhere out there, some unfortunate child still isn’t being vaccinated because of the fascinatingly uninformed opinions of Jenny McCarthy.

That’s why it’s extremely disappointing to see the negative perception surrounding the positive idea of genetically modified organisms, or GMOs, particularly since the real issue with GMOs is being widely overlooked.  The problem with GMOs isn’t a health concern. According to the World Health Organization, genetically modified foods (foods grown using GMO seeds) that are presently being sold are safe for human consumption. If high-yield crops like soy and corn can continue to be grown free of health concerns, the effect they could have on the world is huge. Crops that are resistant to disease and pests while producing larger harvests make better use of available land, and could be a viable resource for developing nations.

The real problem, as often is the case in Western society, is a legal one. GMOs represent yet another chapter in American greed – one in which a great idea is being stripped of its credibility because of paperwork. Massive corporations that already control much of the world’s food supply, like Monsanto, patent the seeds used to grow genetically modified foods so that the average farmer can’t legally use them. Shockingly, even patented plants flower, and the seeds from modified corn and soy, often end up in the fields of farmers neighboring factory farms. Monsanto’s response is typically handled in the form of a lawsuit alleging intellectual property theft against the farmers. This likely isn’t what Locke had in mind when he wrote about property being a mix of labor and land.

Though affected farmers have attempted to fight back against Monsanto over seed use, the implication remains clear — a stellar idea is going to be kept under lock and key by Monsanto to insure a profit. Perhaps someday in the future, the betterment of mankind will go before a desire to better oneself. But in the meantime, the least we can do is read up on the facts concerning health and GMOs. After all, if they can’t help feed starving children in Africa, they can be made into the components of yet another happy meal for an obese American.
For more information on GMOs, visit http://www.who.int/foodsafety/areas_work/food-technology/faq-genetically-modified-food/en/.

Ellis Arnold is the CUI's editor-in-chief and a journalism and political science student. He writes about diversity issues, politics, student government, music and (sometimes) life advice. Is he qualified to do that? You'll never know. He's a senior from Aurora, Colorado, who's been with the CUI for eight semesters.