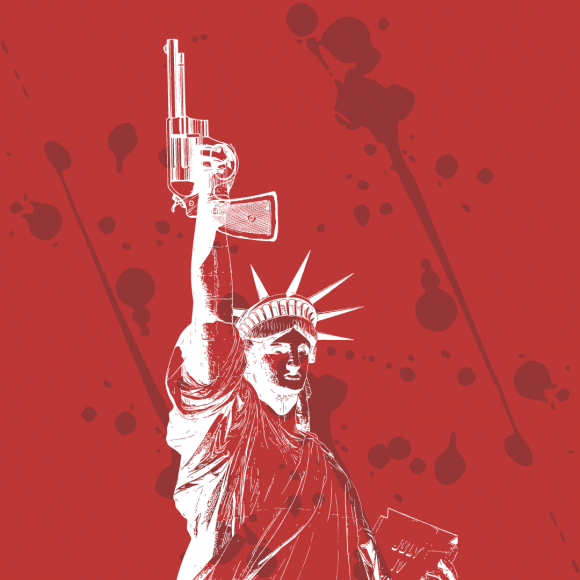 Mass shootings in our supermarkets, spas,  movie theaters, schools, and churches. When will the violence stop? Divided communities of us vs. them, gun control vs. gun rights, freedom-takers vs. freedom-fighters. When will we learn to compromise?

Now is our moment for change.

As individuals and communities, we must begin to dismantle the fear and misinformation about guns that divides our nation. We must break down the fallacy that compromise destroys freedom. Individual rights and safe communities can coexist.

On Monday, March 22, a gunman killed 10 people at a King Soopers supermarket in Boulder, Colo. The suspect, identified as Ahmad Al Aliwi Alissa, used a Ruger AR-556, a shortened version of an AR-15 semi-automatic rifle. He purchased the weapon legally in Arvada, a suburb of Denver, and passed a background check, despite committing third-degree assault in 2018.

In the aftermath of tragedy, many in Boulder and around the nation are demanding swift and strict gun control regulations. Their efforts have been met with considerable backlash from Republicans and gun rights activists, who are afraid of losing their Second Amendment rights.

This backlash is largely fueled by the NRA, a formidable force in American politics. Even Boulder, a liberal-leaning city, isn’t safe from the NRA’s political activism. In 2018, Boulder passed a ban on assault weapons and high-capacity magazines, including AR-15s. Ten days before the shooting, this ban was struck down in an NRA-backed lawsuit.

Since the 1970s, the NRA has used fear-based tactics to craft a compelling pro-freedom narrative built around the idea that the Second Amendment is the lynchpin for every other freedom and that anyone who wants to regulate guns is stealing individual freedom. Due to their political influence, their ideology has seeped into the collective American consciousness, even if most Americans do not believe the most extreme messaging and do support moderate gun legislation.

Their rhetoric must be dismantled for compromise to succeed.

Dismantling the NRA’s rhetoric does not mean taking away individuals’ rights. Gun legislation is not about stealing freedom — it’s about earning social trust and keeping communities safe. Americans should have the right to own guns in accordance with the Second Amendment; however, gun owners must be held responsible for the power they wield through universal background checks, which should also assess mental health records. Most gun owners are safe and responsible, but more work needs to be done to weed out the potentially dangerous ones.

The NRA hasn’t always been political. Founded in 1871, the NRA was originally established by two Union veterans to train hunters and marksmen on gun use and safety. In 1977, the NRA abruptly shifted toward gun rights activism, after a conservative leadership takeover, called the “Revolt at Cincinnati,” took place at the annual convention. In 1990, the NRA Foundation was formed to directly engage in political lobbying.

This shift toward political activism transformed the NRA, creating the radical culture we see today. The NRA created a formidable “us vs. them” narrative by vilifying their opponents, the so-called “violent Left”, ensuring that any gun-control initiative can be attacked as anti-freedom.

John Lott, the NRA’s social scientist, has put forth many claims about gun safety without scientific evidence, starting with his 1998 book, “More Guns, Less Crime.” Lott claims that guns increase personal safety and mass shooters look for “gun free” zones, while dismissing the links between guns and crime or suicide.

These ideas have all been scientifically debunked.

Yet, these ideas fester in conservative media bubbles that wage a war on truth, specifically NRATV, a 24-hour network created in 2016 with political gun rights programming. The NRA closed the network in 2019 amid backlash from controversial content and allegations of misappropriating funds.

Besides spreading misinformation, the NRA also uses misdirection by blaming gun violence on the mentally ill without acknowledging the role of guns. After mass shootings, the NRA usually makes a formal statement about gun safety or Second Amendment rights. For example, a few hours after Boulder’s mass shooting, the NRA tweeted a defense of guns, quoting the Constitution with “the right of the people to keep and bear arms shall not be infringed.”

Research has shown this is a dangerous oversimplification of the link between mental illness and gun violence. Only 4% of overall U.S. gun violence is committed by the mentally ill, though a high percentage of mass shooters are mentally ill. More significant risk factors to predict serious violence are childhood abuse, substance abuse and a history of risky or violent actions.

As the NRA’s effective, dangerous messaging spreads, the industry grows. America has more firearms than people, roughly 400 million for a population of 330 million. Since 2008, the firearm and ammunition industry’s economic impact has increased 232%, from $19.1 billion to $63 billion in 2020. In 2020, the industry saw a significant increase in gun purchases in response to economic and social unrest.

Meanwhile, the NRA is embroiled in scandal over misused funds and self-dealing. Last year, the New York State Attorney General opened a lawsuit against the NRA, alleging fraud and abuse for the executives’ personal gain. Now, the NRA is trying to escape the lawsuit by declaring bankruptcy and reincorporating in Texas.

Even as the NRA claims to protect freedom through gun rights advocacy, it is rotting from the inside out with incompetent leadership, fraud and corruption. Its promise of freedom is hollow when the organization can’t even free itself from greed, egoism and lies.

Although the NRA does not represent the collective gun-rights movement, it is a powerful representation of systemic control of individuals by powerful institutions using fear as a weapon. To break the cycle, we must break free of the NRA’s manipulative messaging. Then, change will come.

We must let go of fear and step into the power of love and compassion. Our communities are suffering in the face of terrible grief. We must empathize with this pain and work to heal together —  one nation once again, indivisible with liberty and justice for all.

Izzy Fincher is the head arts editor for the CU Independent. She is a senior majoring in journalism and classical guitar performance. She enjoys covering local arts and music events, especially classical music concerts. When she is not writing or practicing, Izzy is teaching yoga, walking her dog or listening to audiobooks.