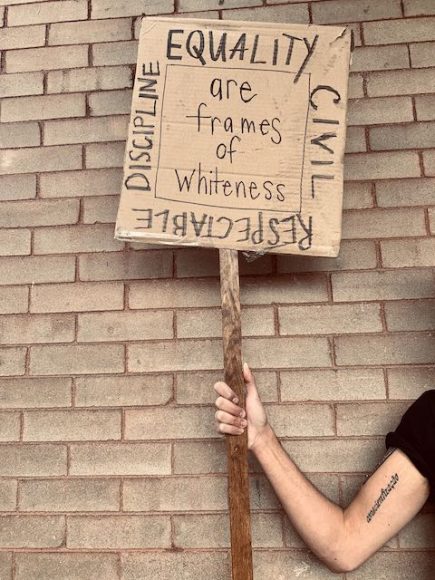 In the school and society class, I teach at The University of Colorado Boulder, I center Black, Indigenous, Latinx and Asian American counternarratives that animate the history of institutionalized oppression in schools which foregrounds the erasure in dominant narratives of schooling. I always hear similar questions from my students, such as, “Why have I never heard about this erasure until just now? Why is this being hidden from us? Wait, didn’t racism end after the civil rights movement?”

The superficial understanding of the history of racism in America exists beyond my classroom — racism exists across the United States. According to an NPR poll inquiring about American attitudes towards race, white Americans are divided on if we need to continue systemic level change for Black Americans or if our country has already made the changes that are needed. This historical erasure is intentional and has contributed to the misconception that racism ended decades ago.

Racism is ever-present and alive today as it was before the civil rights movement. Universities play a significant role in racism’s preservation. Actions towards dismantling university-level racism are the responsibility of the white people at these institutions including those here at CU Boulder.

Anti-racism work is never-ending because our current social systems are founded on white supremacy. At CU, anti-racist work needs to be the ethos of white CU students, staff, administration and the surrounding community. The university must move beyond diversity training and into a commitment to center voices of Black, Indigenous and People of Color (BIPOC) and call out white supremacy as it pops up in the everyday fabric on CU Boulder’s campus.

Universities across the country are heeding calls to address the pervasive culture of white supremacy in higher education. CU Boulder is no exception. My experiences as both a doctoral student and an educator map onto these widespread calls for anti-racist, institutional reform and point to the need for white folks to lean in and accept responsibility for their direct implication.

For example, in my research and teaching with preservice teachers, I focus on anti-racism not as just a set of teaching practices, but an everyday positioning in the world. For example, teachers must be deliberate in their reflections and actions about all the ways race impacts daily interactions, which proves to be a challenge in itself due to socialization within a white supremacist world. Indeed anti-racism begins with the inner intellectual and embodied work to the outer, actionable resistances and disruptions within schooling institutions.

In June 2020, CU Chancellor DiStefano offered only a superficial statement addressing anti-racism. “We are moving forward to enhance CU Boulder’s anti-racism and anti-harassment efforts to improve the campus experience,” the statement said.

When the Chancellor says that anti-racist actions are required to transform the campus, we white people are directly implicated. Just as my students have suffered from a lack of education and an intentional erasure of our shared racist past, so too have I, and likely, you have too. White people must sit in discomfort and face our own isolation, guilt, and shame in order to transform these feelings into acceptance of the truth and action. If white folks commit to this work, white people won’t feel alone, but rather a part of something bigger than any individual can achieve alone.

At CU Boulder, Divest2Invest Collective Plan of Action: Divesting from CU Campus Police for Investment in CU BIPOC and the IDEA Plan call for systemic-level change to disrupt the pervasive culture of white supremacy within the university.

The Divest2Invest Collective Plan of Action demands that CU defunds the campus police and invests in funds supporting the mental well-being of BIPOC folks on campus, as well as, supporting BIPOC initiatives and projects. In addition, the Divest2Invest plan requires everyone affiliated with the university to take mandatory anti-racism courses.

Most recently, Dr. Rabaka, a CU professor in ethnic studies, submitted a proposal for an African and African American research center (CAAAS) at CU to support Black students on campus and highlight Black arts. Notably, white people should get behind their leadership because there is no opting in and out for faculty, staff, and students of color. Everyone at CU needs to read and be vocal about plans like this.

As a white person, there is a multitude of avenues to start anti-racist work. First, it’s important to recognize that racism is not a topic for debate. White folks need to actively listen to what BIPOC people are saying and take note of places of resistance within themselves to begin processing with other white people. White people should not rely on members of BIPOC communities to teach, absolve or console them during this process.

Secondly, white people need to accept that racism lies in the fiber of America through harmful policies and practices in education, housing, healthcare, transportation and the economy. White people need to learn about the truth of this history and extend their understanding by engaging in intentional reading, reflecting and analysis with themselves.

While studying the true history of America, people should conduct research specifically on whiteness and white body supremacy to understand how racism exists within their thoughts and their bodies. White people must be open to acknowledging uncomfortable histories and embracing their own implications in these histories. In order to reimagine and act on a new future, white folks must face the realities of the racist past and present.

Herein lies the binaries within this work. There are so many nuances and intersections, where binaries are set up to distill and simplify. Our existences and actions are complex and nuanced. Humans must let go of binaries like right or wrong, bad or good, sad or happy and embrace the discomfort borne of this freedom from deep-seated constructs of whiteness. White folks must be able to hold many truths at once.

Acknowledging the existence of racism is not enough.  White people must identify and overcome stereotypes, microaggressions, biases and racism while owning that with racial privilege comes inherent power. White people need to learn from the organizing efforts of BIPOC folks in order to see how to leverage one’s privilege to contribute, without absorbing the attention and taking all recognition.

Lastly, white folks need to know that this work is possible, but does not come without discomfort. White people need to know that they are worthy and also carry trauma from white supremacy. Though this trauma is starkly different from what BIPOC folks face every day, everyone carries the hurt caused by white supremacy. Systemic policy change requires a collectivized group of people committed to liberation at every level.

Anti-racism is an ongoing, never-ending endeavor. White people need to visibly stand in solidarity with BIPOC community members at CU in pursuit of justice and equity for all.

This was a guest opinion submitted by Kachine Kulick, PhD candidate at the University of Colorado, Boulder. To submit a letter to the editor or a guest opinion, email tips@cuindependent.com. Our submission policies are here.