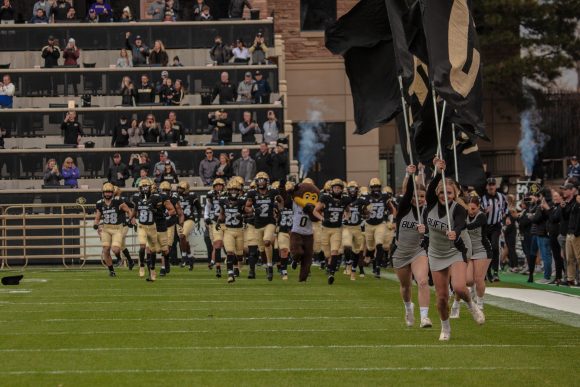 After a 28-13 loss to Utah, the Colorado Buffaloes finished the 2021 season with an overall record of 4-8 while going 3-6 against Pac-12 opponents. The Buffs played well at home, posting a 4-2 record at Folsom Field but were winless on the road as they were 0-5 as the away team this season. Head coach Karl Dorrell noted that he believes the 2021 Colorado Buffaloes were better than the 2020 Colorado Buffaloes that went 4-1 and qualified for a bowl game.

“It doesn’t look that way in wins and losses, but like I just told them 15 minutes ago, we’re inches away from being a winning program,” Dorrell said. “We really are. And I think they understand that a little bit. But we still have a lot of work to do.”

The Pac-12 conference’s competition was split evenly as six teams posted more wins than losses, and six teams posted more losses than wins. Colorado finished within the bottom half of the Pac-12 standings, holding a better record than just Stanford and Arizona. After USC faces off against California on December 4th, the loser of that game will have tied Colorado and Washington in record, but will finish above Colorado due to the losses Colorado encountered earlier in the season against the Trojans and Bears.

It was a bitter goodbye for most seniors across campus as the 2021 Colorado Buffaloes posted one of the worst offenses in school history. The Buffaloes averaged 257.4 yards per game this season, which is the worst average in over 50 years and the second worst in program history (218.9 in 1964). Out of the 12 inner-conference teams, Colorado finished the season 11th in scoring offense, 11th in total touchdowns scored, 11th in offensive touchdowns scored, 12th in total offensive yards, 11th in total offensive plays, 12th in offensive yards per play, 11th in rushing touchdowns, 11th in pass efficiency, and 10th in rushing yards. Despite the unproductive season, the Buffs still managed to break many team and individual records, including the most turnover-free games in a season (seven).

A 4-8 season, winning just 33% of games, typically calls for personnel changes. After a 26-3 loss to the California Bears, Dorrell had relieved offensive line coach Mitch Rodrigue of his coaching responsibilities. Ironically, Colorado allowed only one sack in the following game against the No. 10 ranked Oregon Ducks. After the final game against Utah, Dorrell further implemented new changes within the program. He fired offensive coordinator and wide receivers coach Darrin Chiaverini after six years of working for the team. After only 22 months of being the head coach, Dorrell has released the teams offensive coordinator, defensive coordinator, offensive line coach, and strength and conditioning coordinator. Dorell mentioned what Chiaverini meant to the program in a press release.

“This was a very tough decision, especially with Darrin being a former player and knowing how much he truly cares about the program,” Dorrell wrote. “I do appreciate all the time and investment he put in being in the positions he’s been in over the last six years.”

“In a perfect world, I won’t have anybody transfer out or anybody that wants to leave and we just keep building it with our young freshmen coming in,” Dorrell said. “We would love to live under those circumstances. It just seems to me that college football is changing.”