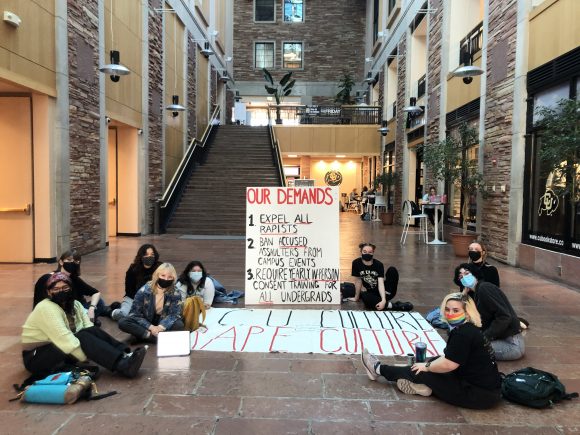 Around 11 a.m. CU Safe Campus began protesting in the University Memorial Center to catch the attention of students and faculty.

The organization sat on the ground of the UMC with a large sign, disclosing their demands for the university involving rape culture on campus. Some students and faculty stopped to ask questions about their protest; others walked past.

The organization held a similar protest before fall break but did not gain the attention they wanted.

According to Pierre Booth, a senior, they chose to protest during the lunch rush to gain more attention about rape culture on campus and make onlookers aware of their demands.

“We feel like nothing is being done,” Booth said.

Sophomore Amy Phillips shared that CU Safe Campus wants better consent training for students. The Office of Institutional Equity and Compliance contacted the organization, and the two plan to meet at the start of the new year.

“We’re looking to have some meetings with them to start having some of those conversations and get to planning,” Phillips said.

At the start of the protest, UMC security requested the organization move, claiming they were a fire hazard. According to Phillips, security was willing to work with them and let them continue their protest after complying.

To learn more about CU Safe Campus, visit their Instagram.