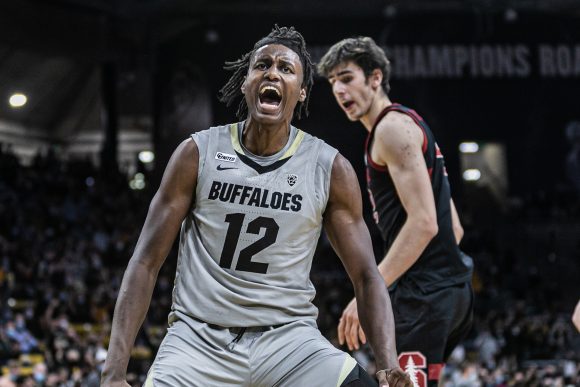 Foul trouble and inconsistency led to a loss against No. 5 UCLA in Los Angeles Wednesday night. A slow start put the game just out of reach as the Buffs were unable to rally back for a win.

Against a talented UCLA team, Colorado couldn’t seem to find the net. The Buffs were just 5-for-21 from the three-point line and shot just under 43 percent on the night compared to the Bruin’s 47 percent.

Foul trouble contributed to the struggles, as leading scorer and senior leader, forward Evan Battey only got 15 minutes of play with four points and two rebounds before fouling out of the game. Sophomore guard Nique Clifford was nearly forced out of the game as he had four personal fouls of his own.

Sophomore forward Jabari Walker was a bright spot for the Buffs. Walker had 22 points with 11 rebounds, which finalized his fourth consecutive double-double performance.

Colorado found themselves being outrebounded for the second game in a row. The Bruins had 36 rebounds compared to the Buffs’ 29. UCLA was able to capitalize on the Buffs turnovers, scoring 23 points off of turnovers while Colorado had just nine.

“It just came down to making plays,” said Parquet. “We got outrebounded. We just have to make plays.”

Head coach Tad Boyle emphasized how proud he was with his team’s effort, but felt as though they were outplayed by the Bruins.

“Opportunity missed,” said Boyle. “I knew our guys had fight in them. I told them that at halftime. I don’t question their heart and ability to come back, and we did in the second half … But (the Bruins) were the better team. They were the more physical team. That’s two games in a row we’ve been outrebounded and that can’t happen.”

After an extremely difficult week for the Buffs, they head home to take on No. 13 Tennessee at the CU Events Center on Saturday. One of the most highly anticipated games of the year, Boyle has high expectations of the CU fanbase for this game.

“It’s going to be a heck of a game on Saturday,” said Boyle. “We need our fans to show up, be loud and proud. If we’re not selling out the CU Events Center for a team like Tennessee, I don’t know why I’m scheduling them.

The Buffs will be back in Boulder to take on the Volunteers on Saturday at noon MST.