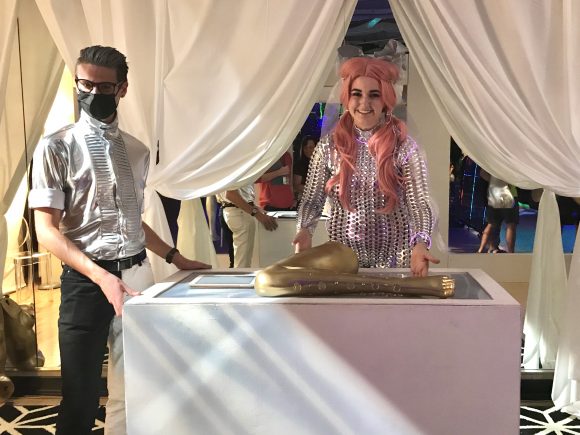 Inside the exhibit of “Virtue of Reality.” (Lou Abecassis/CU Independent)

The University of Colorado Boulder’s MFA Experience Design project “Virtue of Reality” ran last weekend, Sept. 20-22, at the Carlson Gymnasium on campus. The interactive project allowed audience members to experience a dystopian future complete with actors and a realistic set.

The experience began in the dull, empty reception room of VeraRev, a company which improved humans by making them entirely bionic. There the spectators were asked to fill out a form filled with odd questions, such as “What do you associate with the color green?” and “Are you happy with your body?” Then the spectators were transported to the year 2060.

In this dystopian future, corporate greed has taken over and society is split into three sections. “The Nest” is a hipster commune that doesn’t allow any technology and openly rebels against VeraRev’s modifications of the human body. In “District 7,” people still buy into VeraRev’s idea of improving humans, but they are too poor to afford the procedures. “Binary Hills” is an area for those rich enough to buy any of VeraRev’s improvements.

Entering this experience, the spectator became a part of the world. Blake French, an audience member, stated: “you start inventing your own character” within the world. “It’s like being in Skyrim,” he continued, making comparisons to the show and to being in an actual video game.

“It’s amazing that (the actors) were able to get in the space (so quickly),” said Jenine Dunn, one of the MFA students who created the show. “(They) brought life into their characters.”

Dunn said the show’s creators “wanted to focus on the future,” and hoped the spectators would “reevaluate their present.” They wanted to show the audience that “you have the opportunity to make things better if you see how things can be bad.”

Audience members were impressed by the project, with most staying longer than their one hour slot. “The only complaint I have is the time limit,” said French, who felt like that was the weakest point of the show.

Dunn responded to this complaint, saying that one of the creators’ goals were “to create something that left people wanting more.”

Still, Dunn said she was very proud of the overall success of the show: “It’s a culmination of our time as a group together,” Dunn said, “and that it went so well is really exciting.”