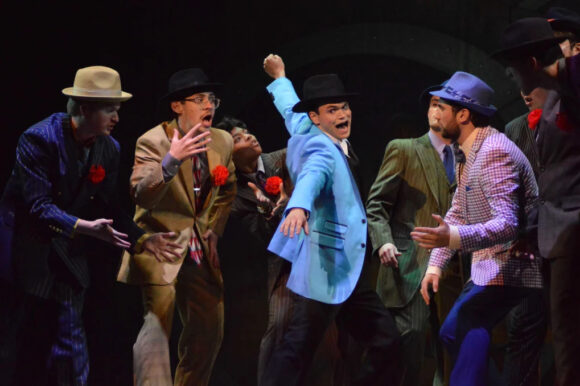 Crap Shooters and Sky Masterson in “Guys and Dolls.” Photo by Lily Valdez.

On Saturday, March 12, the Macky Auditorium at the University of Colorado Boulder was buzzing with excitement for the Eklund Opera Program’s and the Bachelor of Music in Musical Theatre Program’s very first collaborative performance, “Guys and Dolls.”

As the lights dimmed, out popped conductor Nicholas Carthy from the orchestra pit of live student performers. At once, the overture “Runyonland,” began in a lively American musical style, building anticipation for the night of comedy to come.

“Guys and Dolls” is a funny, laugh-out-loud musical that was based on American author and newspaperman Damon Runyon’s two Great Depression-era novels “The Idyll of Miss Sarah Brown” and “Blood Pressure.” Jo Swerling and Abe Burrows co-wrote the book and play “Guys and Dolls,” an oddball comedy and enemies-to-lovers romance.

The plot follows Sarah Brown’s Save-A-Soul missionaries, who are attempting to share the gospel on the streets crawling with Nathan Detroit and his fellow gamblers. Detroit attempts to come up with $1,000 to use in his friend’s garage for a typical crap game but can’t convince him since he doesn’t have the cash upfront.

Instead, he comes up with the brilliant idea (if he does say so himself) of betting haughty gambler Sky Masterson that he can’t take a woman to Havana. Of all people, he assumes Sarah Brown is the last person who would ever go to Cuba on a whim, especially with a guy like Sky. However, Sky convinces her to come with him after he promises to send twelve sinners to her midnight prayer meeting. 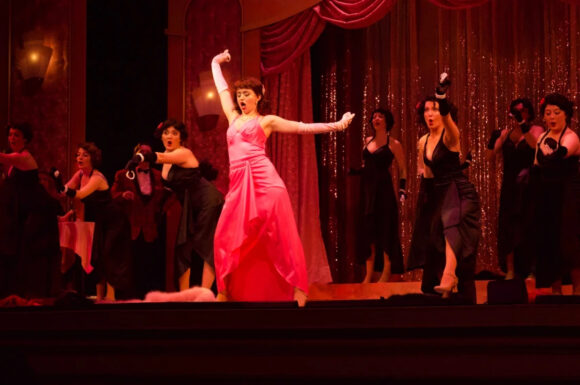 Miss Adelaide in “Guys and Dolls.” Photo by Lily Valdez

Sarah and Sky’s relationship starts off as ultimately humorous as he wandered into her mission stumbling and falling over, putting on an act to win her over. After being asked what was wrong by the head of the mission he proclaimed, “My heart is heavy with sin!” sending the audience roaring with laughter.

Although he was originally attempting to woo Sarah for a bet, their love story became one that caused tears to creep into audience members’ eyes, especially through songs like “I’ve Never Been In Love Before” and “If I Were A Bell.”

Christian Atherton was the voice and persona behind Sky Masterson. He is pursuing a Bachelor of Music in voice performance at CU Boulder. His tenor voice and New York accent paired wonderfully with sophomore Lily Valdez’s voice, who played the part of Sarah Brown. Her soprano voice reached heights that echoed beautifully off the walls of the theatre. The chemistry that these two shared crept up slowly and then all at once, creating a fantastically entertaining and beautiful spectacle for audiences to behold.

Kees Nachbar (Nathan Detroit) and Caroline Glynn Dewell (Miss Adelaide) stole the show by performing “Sue Me,” when Adelaide confronts Nathan about standing her up on the night of their elopement. She wonders aloud if they will ever get married after 14 years. Nachbar sang in a caressing New Yorker accent while Dewell sang impressively and quickly in the same sort of New Yorker way.

This duet had audiences laughing through the full two-minute and fifty-second performance, ending in a fierce singing match where Nathan Detroit proclaimed his love for Miss Adelaide. These two provided a powerfully comical and talented presence throughout the show, sending audiences cheering for many minutes after the show.

The orchestra, led by the co-chair of voice and opera of Eklund Opera Program, Nicholas Carthy, was particularly on point the night of the performance. The orchestra members were all student performers but sounded as though they had been performing professionally for multiple years. The fun and upbeat classic American musical theatre style made it all the more entertaining to listen to them play, even when actors were not on stage in between scene changes.

Set changes were seamless and happened as actors were on stage, aside from the 15-minute intermission. Huge set-pieces were constantly being moved around behind a screen that would come down painted with New York City streets to make the transitions invisible. These elaborate sets included scenes from the Save-A-Soul Mission office, the crap-shooter crawling streets of New York, Miss Adelaide’s impressively pink Hot Box theater, nightlife in Havana and a New York City sewer.

Many well-known songs including “Luck Be a Lady,” “Sit Down, You’re Rockin’ the Boat” and “A Bushel and A Peck” were mixed in with less known songs that were equally enjoyable and diverse. The show provided a lighthearted night of comedy for attendees. These CU Boulder students and faculty members brought a highly enjoyable night to the table, one that is not to be overlooked.