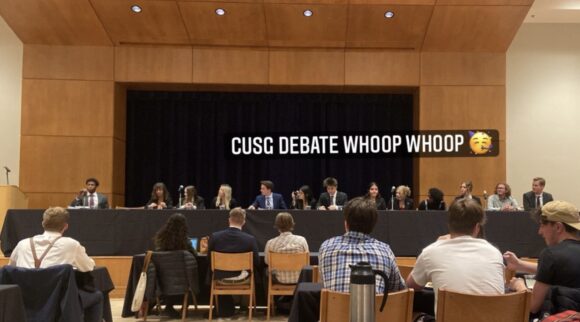 As voting opens for CU Student Government on April 4, one Independent and four tickets debated at the University Memorial Center Wednesday night over their vision for the future of campus and community life, focusing on inclusion, campus safety and mental health.

The debate started off with a question on inclusion, asking candidates where CU could do more to include students. The Inspire ticket emphasized the importance of working with student cultural groups directly, with the goal of holding more consistent events each month to raise awareness of clubs on campus,  so they can get more members and teach the rest of the student body about their culture because, “on this predominantly white campus, there’s a lot of ignorance,” said Andrew Harvey. “The only way to do this is to bridge the gap and educate people.”

The Unity ticket spoke at length about the importance of breaking down barriers to better inclusion on campus, “not just for race, not just for sexual orientation, but every community,” said Rachel Hill. Amplify plans to do this by creating fee waivers for study abroad programs, “so students can see all that CU has to offer,” as well as creating a virtual option for all classes and campus events so students are set up for success.

The Amplify ticket promoted their message of amplifying every voice on campus, which they plan to do through reaching out to state and local government for more funding, which would help to decrease tuition across CU and increase socio-economic diversity on campus. Chyna Varner also highlighted the importance of increasing funding for disability services, so that events on campus can have more interpreters and including deaf or hard of hearing students.

CU4ALL highlighted the importance of student voices in clubs, planning to allocate some of the budget CUSG has to promoting more diverse student clubs, “because when you got to a school that’s primarily white, you’re only getting one opinion…having students of color be heard is a huge part of our platform,” said Elizabeth Craig.

On trying to create a more inclusive campus, Independent candidate Travier Craddock rebutted previous candidates, stating that CU does reach out to students, saying “this school is supposed to be based off equality, and I guess we’re there in a way. Thirty-eight percent of staff are people of color. We have diversity like other schools.”

Safety on campus is at the forefront of students minds, and candidates have several policy proposals to protect students on campus. Lucie Nguyen of the Unity ticket outlines her ticket’s plan to implement emergency safety checklists in every building on CU, “so that when there is an emergency situation, you’re not waiting for an email.” While she didn’t describe what specific emergencies the checklist would contain, Nguyen noted that, “It’s not a perfect solution, but it’s definitely a step in the right direction.”

On student groups that are seen most at-risk, Amplify spoke about women, particularly when it comes to sexual assault. Chyna Varner pointed out the need for mandatory consent education courses, which Amplify would plan to work with CU on so it’s a requirement before signing up for classes. “When people can define what sexual harassment is, I think it really helps with bringing down rates of sexual assault.”

On ways that campus safety could be increased, Independent Travier Craddock said student government needs to hold people accountable, saying, “I think if we actually hold them accountable and actually go out to the public and expose them, that would be the way to go about handling the situation.”

CU4ALL spoke about the need to expand on protecting students as they walk to their dorms or apartment at night, calling for expanding on ebikes across campus and later bus routes, with Elizabeth Craig saying CU Nightride, “hasn’t worked for me in the past.”

The Inspire ticket set the goal of creating an app that would allow students to report threats/crimes on campus and in the greater Boulder community, with the mission of keeping students on the same page and giving students information in a timely manner. While, the Rave Guardian and Everbridge apps are already in place, Inspire’s program would be left in the student body’s hands.

As the Coronavirus Pandemic enters its third calendar year, student’s mental health was a prominent topic of the debate. Candidates spoke about their visions for improving student mental health, with the Unity ticket specifically focusing on victims of sexual assault. Unity proposes implementing PRISM (Promoting Initiatives for Sexual Misconduct) through the Title IX Office, a program with a restorative approach that provides accountability with the help of a counselor for survivors of sexual assault.

On increasing mental health resources, Carter Galyardt of CU4ALL argued that where CAPS (Counseling and Psychiatric Services) fails, students clubs succeed, so he plans to increase the promotion of clubs on campus.

“A big problem of mental health is alcohol and substance abuse, and we need to increase our community outreach,” he said. “The opposite of addiction is connection.”

The Inspire ticket agrees that CAPS fails and, taking it a step further, called it a “broken system.” Andrew Harvey proposed that to further focus on helping students’ mental health, Inspire would modify the Health and Safety Chair of student government to focus specifically on mental health, working with a committee to, “be there for person-to-person contact with people who can actually help them.”

Amplify agreed that CAPS “has problems,” but thought there is room for expansion. With the six free therapy sessions CAPS already provides, Amplify would take it a step further and push for students to seek diagnoses and see a psychiatrist during these sessions.

Independent Travier Craddock plans to further promote Wellness Wednesdays, saying “that is something that could actually benefit our communities.”

Students can cast their vote for the representatives-at-large and tri-executives from 8 a.m. on Monday, April 4, until 8 p.m. on Friday, April 8. Voting can be done at polling stations at the UMC or through Buff Portal.