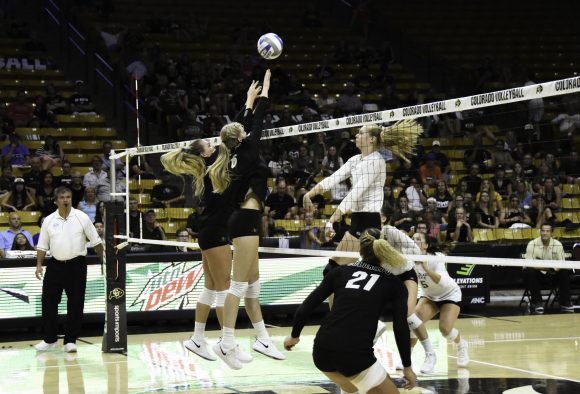 After a 30 minute delay, the final match of the women’s volleyball Colorado Classic between in-state rivals CSU and CU began. Both teams entered the match on Saturday with a 2-0 record, defeating Portland State and Indiana State respectively. While there is no official trophy up for grabs, bragging rights between rivals served as motivation.

The Smiths, Alexa and Anyse, both got off to a hot start in the first half of the first set. Alexa racked up three kills and Anyse made one kill and two blocks. Alexa Smith’s second kill of the night was her 1,000th career kill. She is now the sixth player in CU Boulder women’s volleyball history and only the second Colorado native to accomplish this feat.

“It’s an honor to be a part, but I wouldn’t have this without my teammates,” Smith said.

The Rams were anything but quiet in the first set. Redshirt sophomore and outside hitter Breana Runnels racked up seven kills, almost helping CSU take the first set. However, Anyse Smith’s powerful swings were too much for the Rams to handle, and the Buffs finished the first set with four kills and three assists. This helped the Buffs win a crucial first set 28-26.

The Buffs continued their momentum throughout the first set. As the Smiths kept going, other players were heating up. Breakout performances from redshirt freshman middle blocker Danielle Price and junior outside hitter Justine Spann kept the Buffs energy up throughout the game. But it was their hustle that was most valuable, especially when there were long points that could be potential momentum shifts.

Midway through the second set, the Buffs continued to use the whole team to win the set, though CSU had five players with four points or more to keep the Buffs on their toes. Redshirt junior outside hitter Jessica Jackson totaled seven kills at the end of the second set, nearly helping the Rams climb back into the match. Unfortunately for the Rams, Naghede Abu started playing like her old self. After being sidelined due to an injury, Abu is working her way back to playing at game speed. In her third game back, Abu finished the second set with seven kills and six blocks. She helped the Buffs to a 26-24 set win, increasing the match score to 2-0.

The Rams came out sizzling in the third set. Coach Jesse Mahoney said they may have gotten a little too comfortable and let CSU take control of the set. At one point the Rams led the Buffs 16-8 midway through the set. The Ram’s success can be attributed to Runnels, who had 13 kills, and Jackson with 12 kills for the set. Despite a late effort by the Buffs, the Rams managed to hold on and take the third set 25-18.

Just like the Rams in the third set, the Buffs came out hot and heavy, quickly leading the set 15-6. Alexa Smith led the team with 12 kills and three blocks on the night. She helped the Buffs finish off the Rams 25-22 in the fourth and final set.

The Buffs play the University of Utah at the CU Events Center Wednesday night at 7 p.m., thus beginning Pac-12 play. 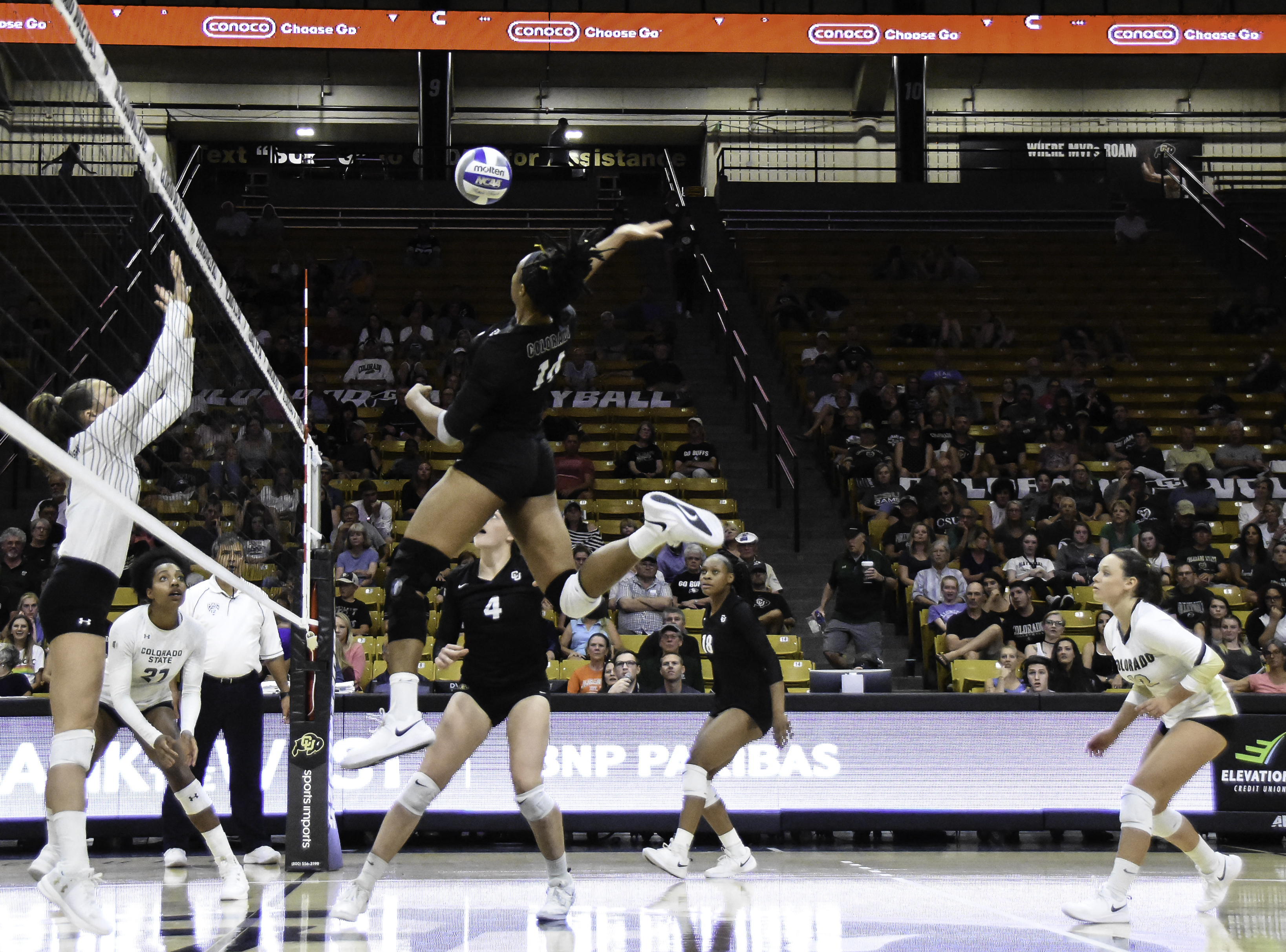 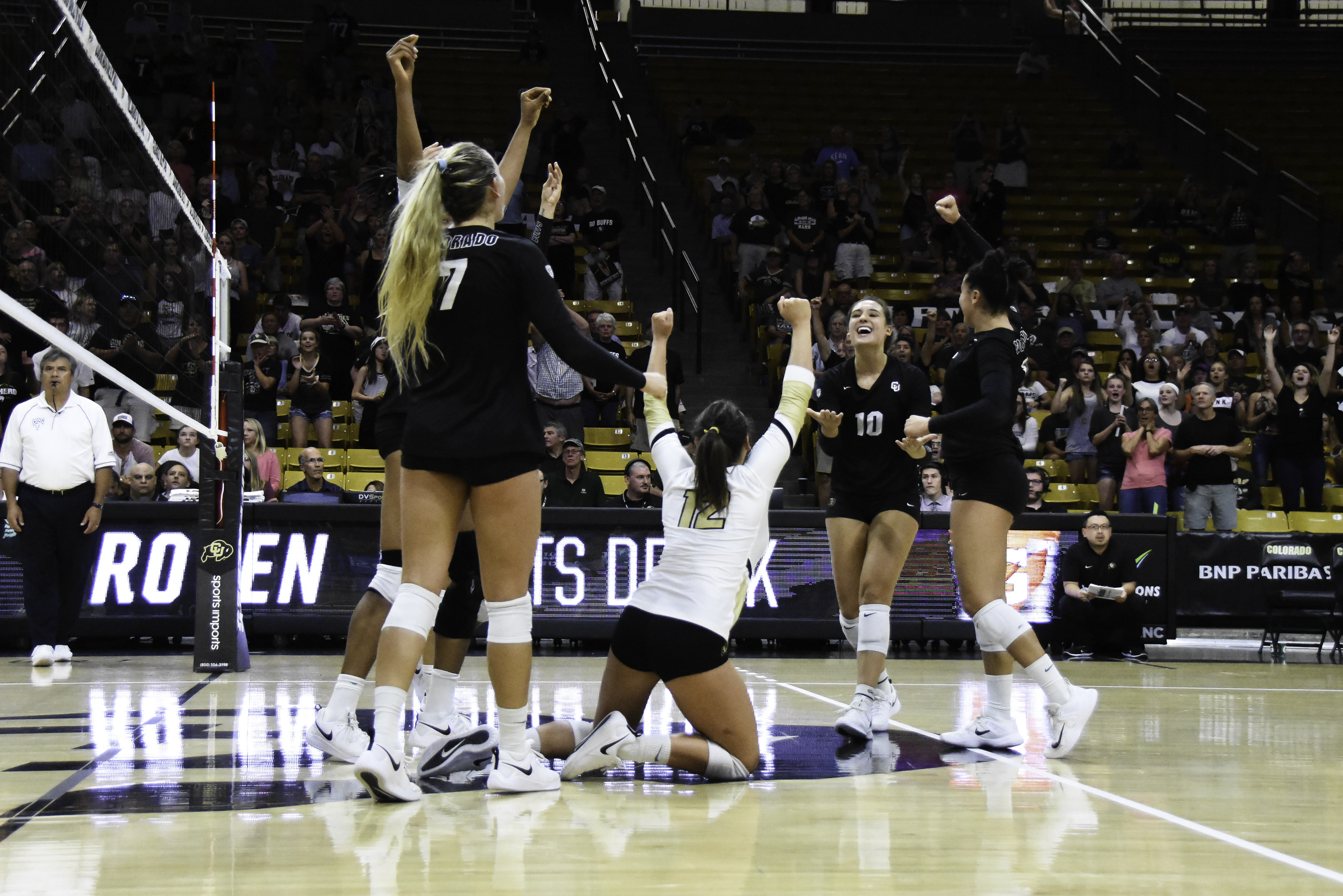 The buffs celebrate winning the first two matches and went on to win the game after the fourth match. Sept. 15, 2018. (Fiona Matson/CU Independent) 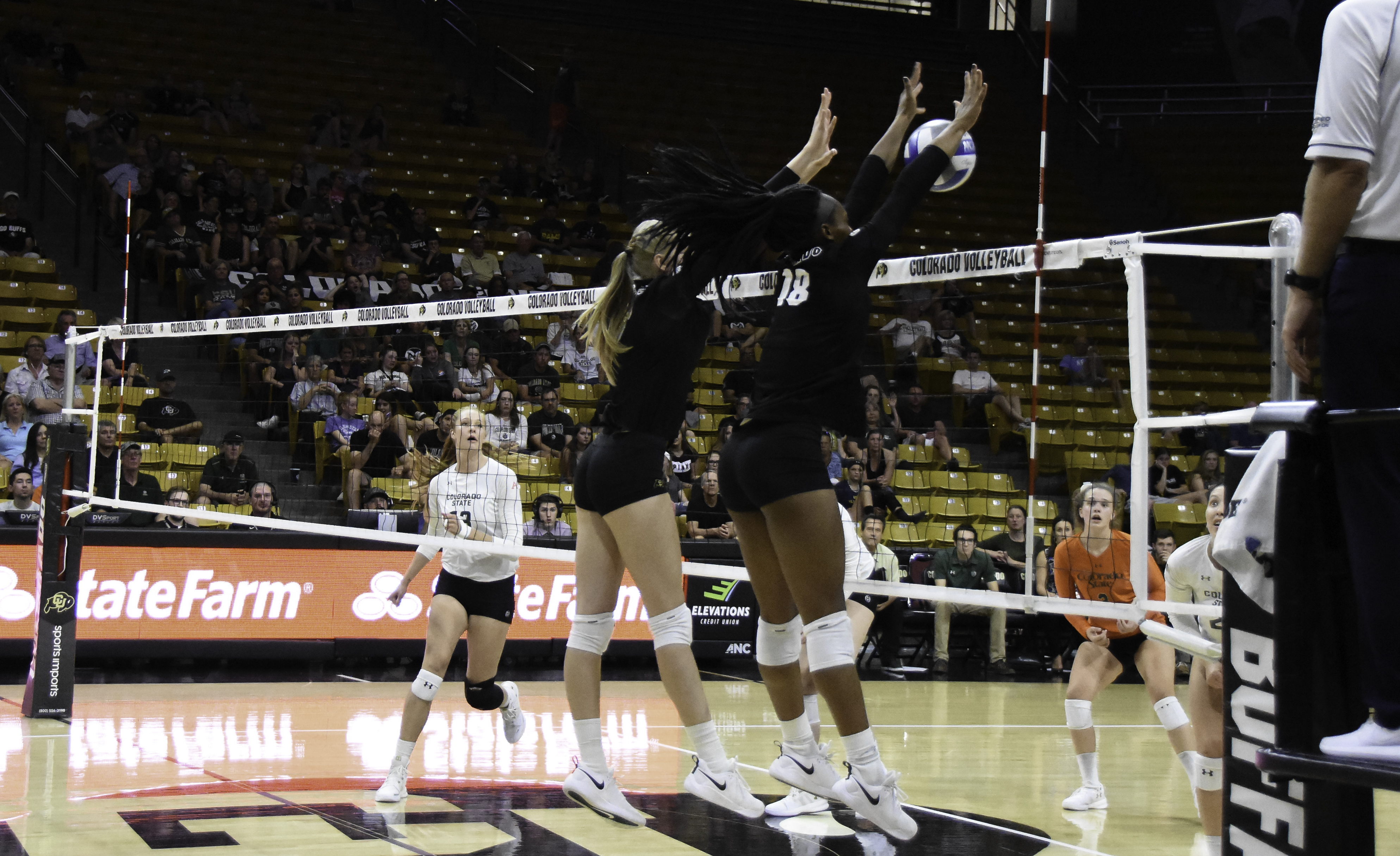 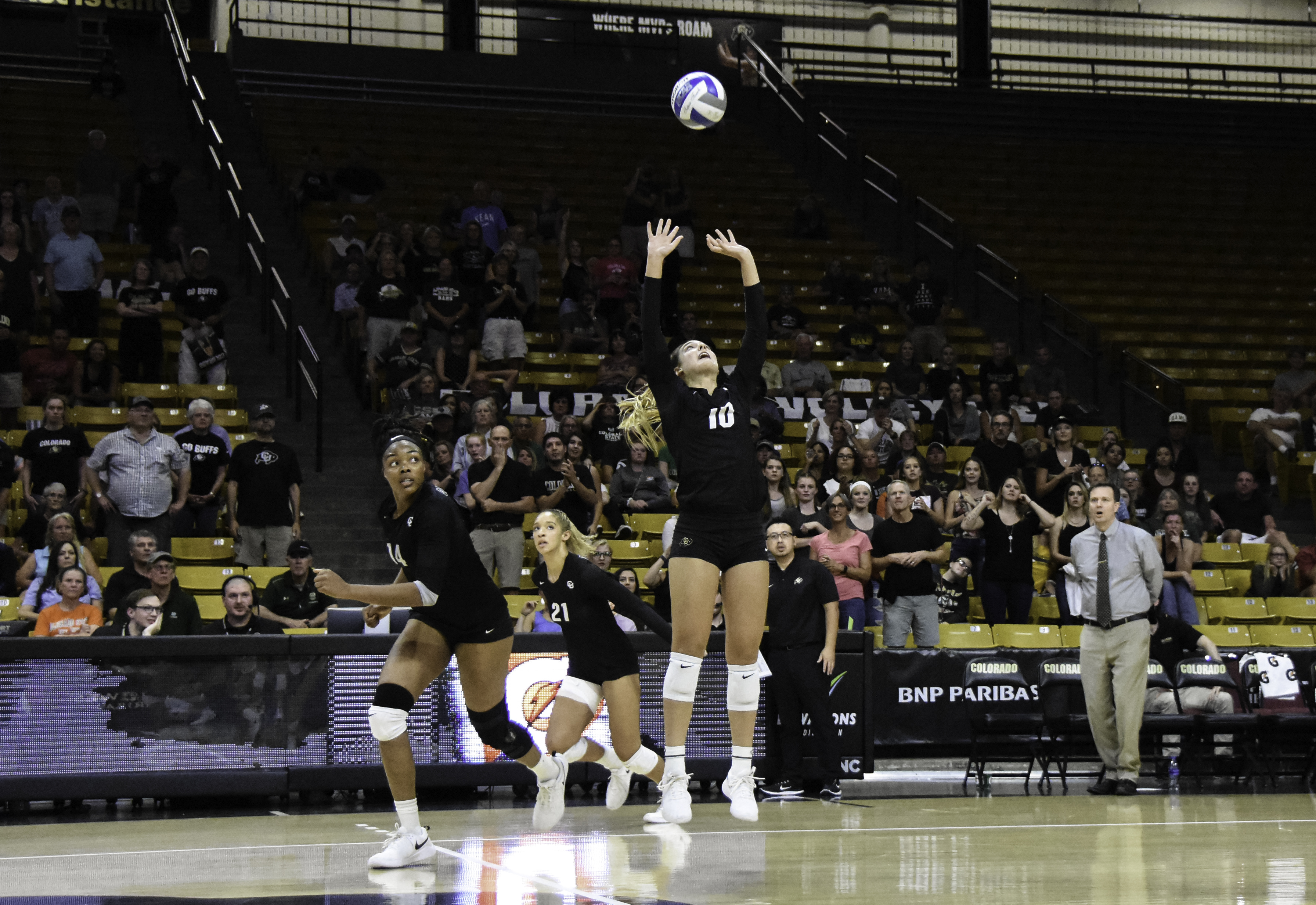 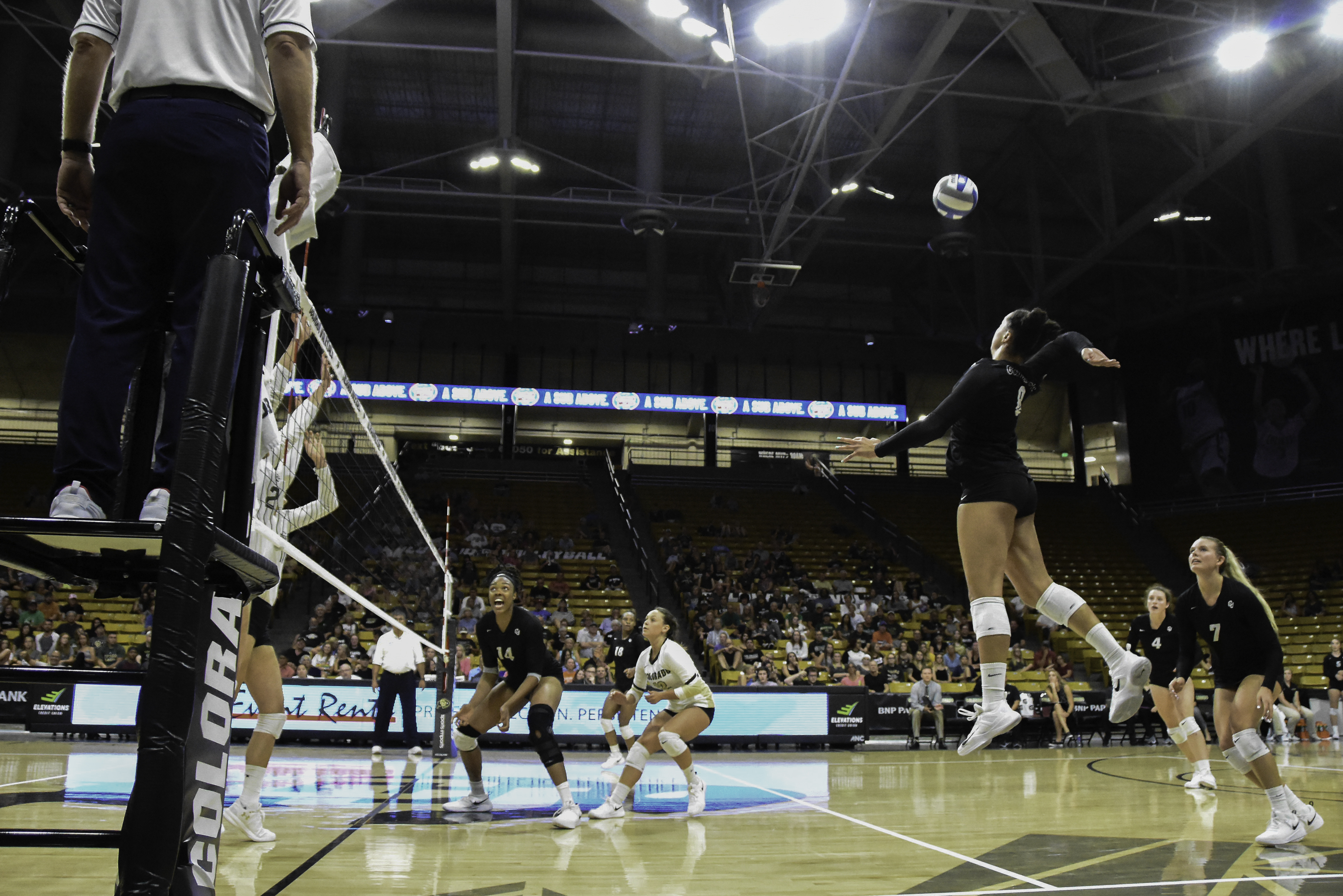 Junior Justine Spann springs into the air to clear the ball from the buff's side. Sept. 15, 2018. (Fiona Matson/CU Independent) 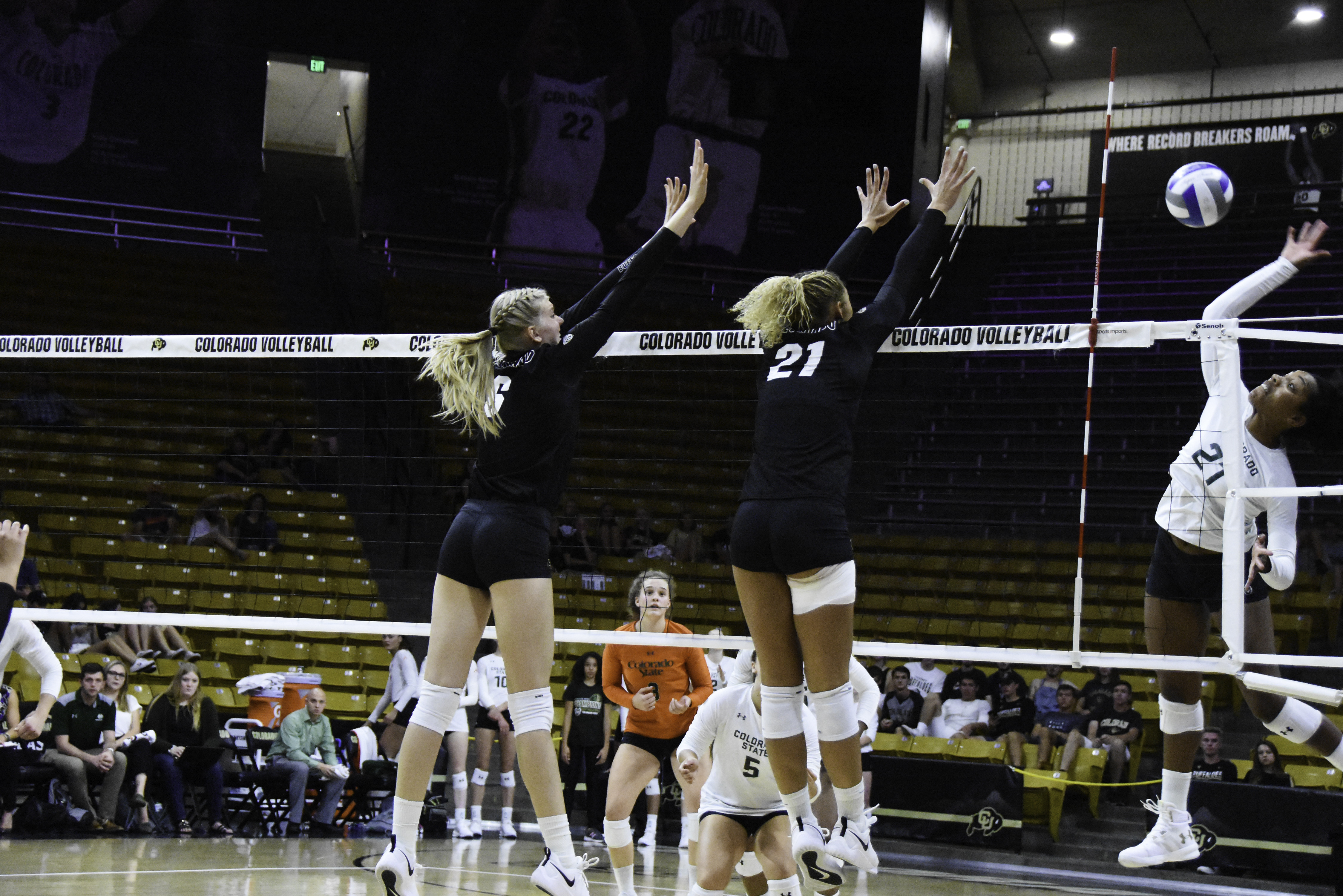