Colorado still searching for answers in fifth loss of the season 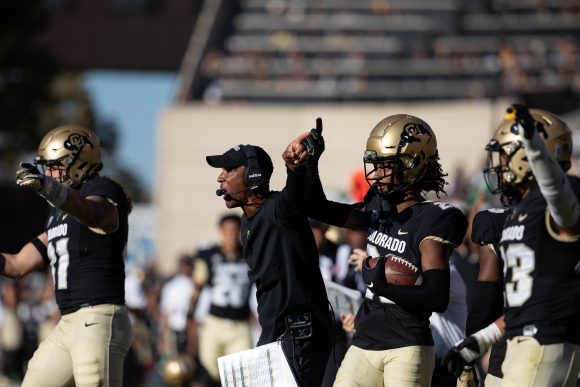 After an offensive explosion against Arizona last weekend, the Buffs returned to typical fashion as their offense struggled to pose any threat and they lost in another Pac-12 matchup against the California Golden Bears with a score of 26-3. Head coach Karl Dorrell has led this Colorado team to a 2-5 start while holding a 1-3 record in inter-conference play. Dorrell discussed the struggles that CU faced against California.

“That wasn’t the type of game I was expecting at all,” Dorrell said. “I think we struggled in the first half on both sides of the ball. Unfortunately, we didn’t play to our capabilities today. We had a great week of practice. I felt we were going to play our best football, but it didn’t happen today.”

The Buffaloes scored just 3 points in the entire game, resulting in Colorado’s three scoreless quarters. They could only amass 104 total yards on offense throughout the game, where only 13 of those yards came in the second half. Freshman quarterback Brendon Lewis could only lead his offense to a total of 7 first downs compared to California’s 23.

Although freshman wide receiver Brenden Rice could only accumulate one reception for six yards, he showed some potential at the kick returner as he could take one of his two returns back for 67 yards. Rice explained what the mindset of each player should be going forward.

“If you’re not bought in, you might as well just leave,” Rice said. “There’s no room for anybody who’s trying to be out or trying to excuse themselves from the team. We need to all be bought in for us to take the next step.”

The only source of the silenced production for the Buffaloes offense came from junior tailback Jarek Broussard. Once Cal’s defense was able to show they could prevent the run, holding Broussard to just 28 yards on 11 carries, Broussard was able to offer his duel-threat ability by recording 30 receiving yards with three receptions. After these 14 touches in the first half, Broussard failed to record a touch in the second half of the game. Rice mentioned how the attitude within the team needs to change for future games.

“People are too nice,” Rice said. “People are way too nice, and that’s all going to change this week. It’s not the coaches. It starts with the players. It’s time to take that next step.”

Colorado’s defense wasn’t dreadful, although allowing 23 points in the first half while carrying a sluggish offense wasn’t exactly the expected game plan heading into Saturday’s game. Junior linebacker Nate Landman hit a career milestone as he became the sixth player in CU history to record 400 career tackles when he made his first tackle on the second play of the game. Despite Landman’s achievement, CU struggled throughout all four quarters of the game. Junior cornerback Mekhi Blackmon explained what the issue was on the defensive side of the ball.

“We always preach to start fast, but I feel like we didn’t start fast today. That’s something we have to work on more in practice,” Blackmon said. “I don’t know if it is nerves or what, but we all have to start stepping up and have things clicking better on both sides of the ball. It’s not just the offense. We (the defense) gave up the points, not the offense.”

Their goal was to stop California wide receiver Nikko Remigio, who leads the Bears with 22 receptions this season, including a pair of touchdowns. Remigio was also California’s leading receiver in 2019 with 38 catches for 513 yards and three touchdowns, which could explain his performance in this one as he and teammate Trevon Clark led Cal in receptions with four each against Colorado.

The Colorado Buffaloes will take on the number 10 ranked Oregon Ducks in Eugene, Oregon, next Saturday, Oct. 30th. Oregon, who is 6-1 this season with an inner-conference record of 3-1, sits at the top of the Pac-12 standings.

Karl Dorrell relieved of his duties as head coach