Denis Villeneuve’s “Dune” is a sprawling, beautiful slow burn almost worth the wait 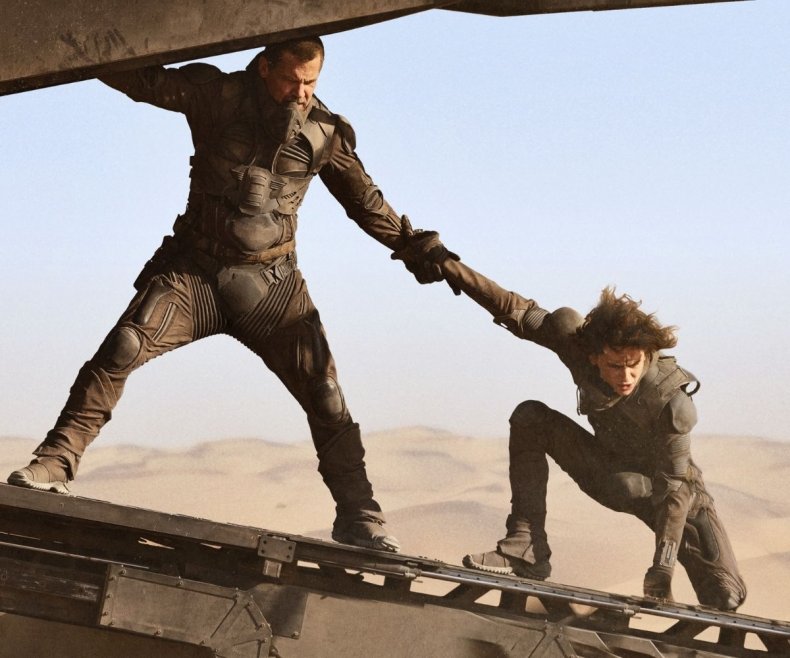 No director in Hollywood right now was more suited for the impossible task of adapting “Dune,” Frank Herbert’s landmark sci-fi franchise, than Denis Villeneuve. From the mystique of the first-contact film “Arrival” to the iconic cyberpunk aesthetics of “Blade Runner 2049,” the French-Canadian director’s talent for sci-fi worldbuilding was already well-proven at the box office.

Released on Oct. 22, Villeneuve’s “Dune” finds itself nearly 8,000 years in the future, when humanity lives throughout various planets in a feudal society. The film follows the strife between House Atreides and House Harkonnen as they seek to control the fate of Arrakis, a desolate planet home to humanity’s most valuable resource: spice, a mineral that grants spaceships the ability to achieve interstellar travel, while also providing near-superhuman strength and mental acuity to humans who ingest it.

If that sounds like setup to a convoluted premise, that’s because it is. It’s no secret that the 1965 source material, originally written by Frank Herbert, is a notoriously dense read. David Lynch’s 1984 attempt at adapting “Dune” was famously panned by audiences and critics alike and the series’ latest big-screen representation came in the form of “Jodorowsky’s Dune,” a 2013 documentary detailing Alejandro Jodorowsky’s colossal failure of translating the book onto the big screen back in the 1970s.

So, it comes as no surprise that Villeneuve’s “Dune” is deliberately condensed where it can be, clocking in at a relatively tame 155 minutes. Villeneuve forgoes too much explanation on the politics of these interstellar fiefdoms and the all-ruling emperor who controls them (though lengthy exposition still drowns much of the film’s first half-hour, which features dull scenes of characters listening to a history lesson via hologram). Instead, this “Dune” tries to be a coming-of-age story at heart.

“Dune” focuses on Paul (Timothée Chalamet), the teenage son of Leto (Oscar Isaac), ruler of House Atreides, who is sent to Arrakis to oversee the collection of spice with his family and ensure control over the planet’s population of natives who have lived under countless spice-mining rulers. Throughout the film, Paul also seeks stability within himself, as he attempts to navigate his dual destinies.

On one hand, Paul is all but set to follow his father’s footsteps as an interplanetary oligarch, but on the other, his mother’s more mysterious bloodline prophecies Paul to be a “superbeing,” one that might have a messiah-like future grander than political feuds. However, it’s not a spoiler to say the presentation of Chalamet’s characterization is much more setup than a fully-fledged character arc. After all, this “Dune” is really just “Dune: Part One,” the first half of a lengthy script conceived by Villeneuve, Eric Roth and Jon Spaihts.

Whether it focuses on character development or world-building, this half of “Dune” is a slow burn. Villeneuve paces the film for those who prefer rich worldbuilding and thickly-layered plot lines to fast-paced, video game-like space battles. Explosive moments, like the scene where Paul confronts his mother over the anguish he feels at his two conflicting bloodlines, or the showdown between Leto and his sworn enemy, Vladimir Harkonnen (Stellan Skarsgård), are few and far between.

This conservative showcase of big, bombastic moments is a bold creative decision that comes off as refreshing in the modern sci-fi landscape, though it often leaves the versatility of the film’s acting cast sidelined — again, something that could very well be remedied when watched back-to-back with the second half of this epic in a few years.

Thus, the subdued performances of the cast of “Dune” are somewhat understandable. They come off as well-earned and realistic, given the film’s commitment to its dark and complex source material.

Though written in 1965, its themes are even more poignant now. “Dune” touches on humanity’s scourge of the natural environment in favor of quick profit for the elite, along with the subsequent horrors of imperialism that are thrust upon that environment’s indigenous population. Despite the film’s lengthy runtime and foremost commitment to grandiose aesthetics, these themes are well-translated in efficient moments.

Unlike other major sci-fi and fantasy epics, the messy realities of politics, environmentalism, war and religion aren’t given clear-cut, idealistic solutions here.

“They were meant to free the water locked beneath the sands. Arrakis could have been a paradise,” explains Liet-Kynes (Sharon Duncan-Brewster), a scientist working with House Atreides, at one point in the film, “But then spice was discovered and suddenly no one wanted the desert to go away.”

However, pointing out the complicated intersections of real-world themes isn’t to say “Dune” is inaccessible or one that takes itself too seriously. It’s a delight to see a work as complex as this — one that was once thought of as impossible to adapt to the big screen — finally get the glitz and glamor of other 21st-century pop culture staples.

From the rugged, lived-in military vehicles reminiscent of “Star Wars” to the brutal, medieval violence comparable to “Game of Thrones,” it’s wonderfully surreal to see “Dune” showcased to mainstream audiences, now adopting the visual aesthetics of the countless fantasy and sci-fi works it has inspired since Herbert’s original inception almost 60 years ago.

“Dune” is a film that could have easily coasted to box office records solely due to its star-studded cast and elusive, but intense, action sequences. So, it’s worth praising Villeneuve for weaving in complex subliminal commentary and paying respect to Herbert’s ambitious worldbuilding alone, even if juggling it all leaves “Dune” feeling painfully unfinished, with much to be desired in the characterization of Paul Atreides and pretty much every secondary character.

However, judging “Dune” by its first half alone would be like declaring the outcome of a marathon miles before the finish line. Just like sitting through the vast journey across the endless sands of Arrakis, judging Villeneuve’s ultimate vision will take years of continued patience — or until “Dune: Part Two” releases in 2023.

“Dune” is currently playing in theaters nationwide and streaming on HBO Max.