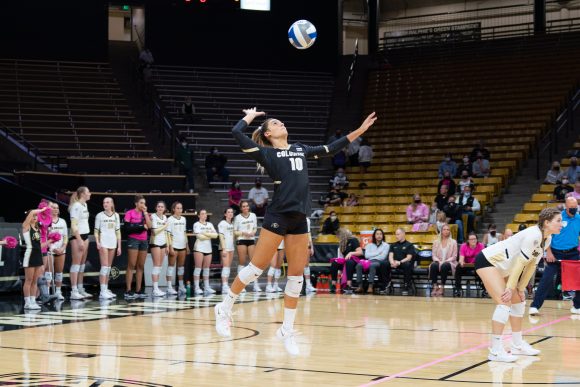 The Colorado Buffaloes Volleyball team has dropped seven of their last ten games, despite a 9-0 start. The most recent of those losses came at home against Arizona and Arizona State in their home arena over the weekend.

Both matches were hard fought on each side, with the Buffaloes on the wrong end. Back and forth battles led to high tension throughout the CU Events Center. CU’s record dropped to 12-7, including a 3-7 record in Pac-12 play.

Sophomore outside hitter Maya Tabron had a fantastic performance over the weekend and continues to prove her reliability for a struggling Buffalo squad. Tabron put up 30 kills between both matches, as well as adding two double-double (10+ kills, 10+ digs) games to her resume.

In combination with Tabron, freshman outside hitter Jahara Campbell got some well-deserved playing time against Arizona. With 11 kills on Friday and another five on Sunday, Campbell has proven that she could be a positive addition to the starting lineup.

In a positive light, redshirt senior libero Brynna DeLuzio recorded her 1,000th dig in her CU career. DeLuzio has been thriving in any and every scenario she has faced this season.

“She’s a great leader, outside of her being a great player, she lifts everyone else up,” said head coach Jesse Mahoney. “I’m excited for her, we need more players to be playing at that type of level.”

“These home matches, just like Friday, are matches that to do what we want in this conference, we need to win,” said Mahoney. “We didn’t get that done.”

The Buffaloes start the second-half of their conference play as they head on the road to take on Oregon State on Friday at 8 PM MST.