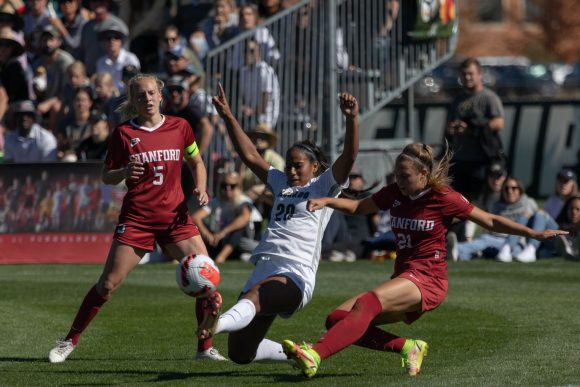 Sophomore forward Shyra James slides to control the ball in order to score a goal during the first half of game against Standford. Oct. 17, 2021. (Kara Wagenknecht/CU Independent)

As the University of Colorado soccer team entered overtime against Oregon State University on Oct.24, their season hung in the balance. If the Buffs allowed a goal to the Beavers, it would likely put Colorado’s postseason aspirations on ice. However, if the Buffs scored first, it would keep their tournament dreams alive for at least another game.

Just two minutes into overtime, a quick goal guaranteed that they would live to fight another day.

The goal came on a beautiful crossing pass from junior midfielder Jade Babcock Chi. The pass flew over the heads of multiple Beaver defenders before being smashed off sophomore forward Shyra James’ head to clinch a thrilling 3-2 win for Colorado (7-6-3) over Oregon State (11-5-0) on a picturesque Sunday afternoon at Prentup Field.

“I thought we played really well today, but you expect that on Senior Day,” said head coach Danny Sanchez. “I thought we had the run of play, for the most part, a little disappointed to let them back in the game, but really pleased with our response.”

The Buffs came out sharp to start the match against the Beavers. For most of the first half, Colorado controlled possession and minimized Oregon State’s scoring opportunities. In the 29th minute, two seniors, defender Hannah Sharts and midfielder Shanade Hopcroft opened up the scoring. The goal started when Sharts fired an incredibly long pass from behind the midfield line towards Hopcroft downfield. The ball sailed over Hopcroft’s head and past a falling down Beaver defender. With her defender on the ground, Hopcroft sprinted to catch up with the ball and, in stride, launched a hooking strike to the far-left corner of the goal and away from goalkeeper Bridgette Skiba to give CU the lead.

The Buffs would hold that 1-0 lead until a wild exchange of goals that involved three goals scored in under three minutes. It all started in the 54th minute when a pass by an Oregon State player hit freshman McKenna Martinez downfield. Martinez sprinted by several Colorado defenders, and with senior defender Haileigh Adams playing tight defense on her, she fired a ball left of Dani Hansen to tie the game at 1-1.

If this goal rattled the Buffs, they didn’t show it all. A mere 19 seconds later, James received the ball from Adam’s pass, spun, and drilled a low shot into the back of the net to restore Colorado’s lead to one.

The action wasn’t over just yet, though, as Oregon State bounced right back just a couple of minutes late. Once again, the culprit was the Beaver’s Martinez, who poked a shot at Hansen. Hansen went down low to block the shot but misplayed the ball as it bounced off her body and into the goal. In just around three minutes, Colorado had gone from winning to tied to winning, and finally back to being even.

“We responded well,” said Sanchez. I challenged Haileigh Adams a little bit, and she got an excellent assist to Shyra [James]. A little unfortunate on their second goal, but over the 92 minutes, I thought that we had more of the pressure and more of it going forward.”

Although Hansen may have allowed two goals on the afternoon, the game likely would not have made it to overtime in the first place without her save in the 63rd minute. Martinez again got the ball near the goal, and she tried to tap a shot to the left part of the goal. Hansen reacted quickly and made an incredible save as she stretched out her leg to just barely hit the shot away, keeping the game tied at 2-2.

The Buffs continued to apply pressure on Oregon State for the remainder of the half, but they could not get that separating goal. However, it didn’t take long in overtime for the Buffs to clinch the win. As an arching crossing pass from Babcock-Chi found the head of James, who put the ball in the net to clinch the walk-off 3-2 overtime victory.

“I feel like it is a relief off our shoulders,” said James. “It really showed that even if we are down or tied that we will still be able to come up. We just need to have a little bit more fight. I feel like we come out stronger when it goes into overtime, and sometimes we go through it, and sometimes we don’t.”

The win also carries special weight for the four seniors who played in their final game at Prentup Field on Sunday: Haileigh Adams, Gabbi Chappa, Shanade Hopcroft, and Sofia Weiner.

“I look up to all of them,” said James. “So, giving them a goal, giving them a win, is just like a big gift that I can give them. Especially when this is like their last home game with us.”

The Buffs seniors will still have at least three games left to play as the team looks to close out the season on the road. Colorado will play Arizona State on Thursday, Oct. 28th at 6 p.m. MST, followed by the University of Arizona on Sunday, Oct. 31.