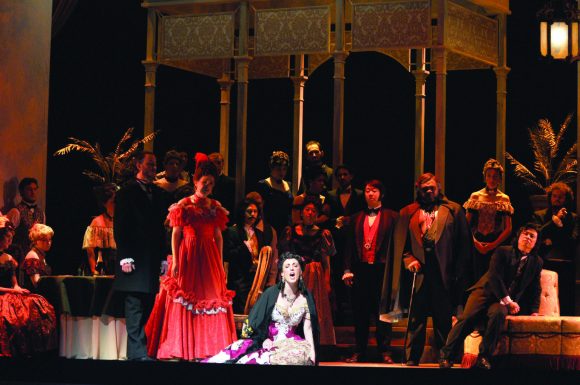 The Eklund Opera Program held its first in-person performance in 18 months on Friday, Oct. 22 in CU Boulder’s Macky Auditorium. As the live orchestra warmed up, the anticipation of the performance slowly built, rising and falling along with the different instruments. The vast red velvet curtains rose to reveal a dazzling set, starting the performance of “La Traviata.”  An interview with the show’s directors can be found here.

The main character, Violetta, is exhausted by her life as a courtesan and is battling tuberculosis. At one of her lavish parties she is introduced to young bourgeois Alfredo Germont. The two of them fall madly in love and Violetta has to choose between a life of luxury or a life with her lover. Eventually she chooses a life with Alfredo but it does not last long as she is visited by his father, Germont, who convinces her to leave him due to the fact that their marriage affects his youngest daughter’s marriage.

Since the show’s dazzling costumes were designed by Ann Piano, it’s no wonder that the singers were made even more show-stopping with these wearable works of art. They quite literally dazzled in the stage light, allowing for a unique and stunning element. Violetta was adorned in dresses that sparkled and flowed with her movement as were her fellow lady courtesans.

The dresses which Violetta wore gave an airy effect which aided in her light soprano voice quality, giving the illusion of ease. Alfredo and the other male counterparts of the show were dressed in structured pieces, staying true to the classical 19th c. style. His costumes allowed for a masculine dominance in the show and paired nicely with his tenor voice which was meant to express romance, innocence and quick-temperedness.

The orchestra, led by the vivacious Nick Carthy, was highly professional in their accompaniment to the singers. There is something authentic about watching a performance with a live orchestra, which was not overshadowed in this adaptation of “La Traviata.”

Carthy was careful to observe the singers and action on stage and was able to get a sense of the emotion this evening, making sure that the orchestra was playing with heartfelt authenticity. Carthy was both sensitive and energetic in his conducting performance.

Violetta’s bed is recursively in the middle of the stage throughout the entire opera, reminding the audience of the fate which she faces. The rest of her furniture, such as her piano, is put towards the back of the stage. Violetta will soon die, and the bed is a continuous presence of this, encapsulating the tragedy of “La Traviata.”

Although the sets were ultimately detailed and highly professional, they made for quite a long transition period. Audiences were left to wait for fifteen minutes in between each set change which added unnecessary time to the performance in addition to the small pause halfway through Act III. However, these sets acted as a beautiful frame for the singers, overshadowing the wait.

So that the audience was not left clueless about the show’s lyrics, especially if they were not well-versed in the script’s language, the Eklund Opera Program provided closed captions on a screen above the stage. These digital real-time translations were included for a more relatable script. Audiences were therefore able to understand the intense emotion and meaning behind the tragedy of “La Traviata.”

A prominent touch that was added by the directors was when Anna Montgomery (Violetta) sang in act three. After returning from a time away from court, singers froze as she performed her solos. This was an individualistic way to illustrate her decline in health and the heart-stopping agony she felt due to her diagnosed illness of tuberculosis.

The directors were also sure to include an hourglass which was added to represent Violetta’s limited time before her illness overtook her life. It was a continuous reminder throughout the opera, allowing audiences to sympathize deeply with her.

Not only did the performers sing excellently in Italian, but the show was executed without a noticeable flaw. This opera, though frequently performed, is exceedingly difficult to pull off due to many vocal challenges.

Violetta’s cadenzas and her aria were well executed due to her light and airy voice quality, and duets between Eric Botto (Alfredo) and Montgomery (Violetta) made for a chilling performance. Botto’s (Alfredo) robust voice quality carried through the opera house, especially when he was not on stage but Violetta was still able to hear his voice. There was an eerie sort of echo which caused each audience member’s head to turn in search of where he was in the theater. This is not a simple task to pull off, but Botto executed it flawlessly.

Throughout the night, the audience had a clear picture of what was going on due to the show’s accessible performances, which were not overly comical. While there were elements of comic relief that were strategically placed throughout the performance, the directors were careful to respect the fact that “La Traviata” is a tragedy, encouraging their actors to embody the spirit of each character which they played.