No charges filed one year after PIKE protest, with some reforms slow to come 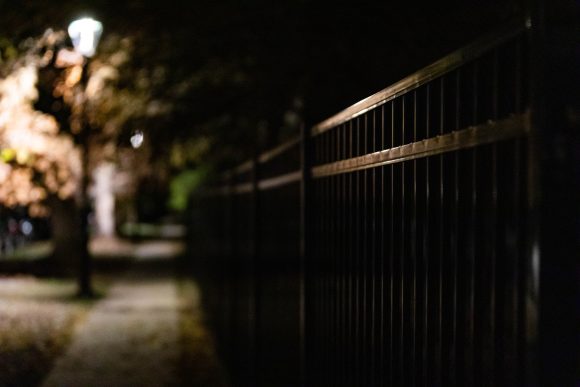 Students who have experienced a traumatic incident can contact free and confidential support resources through the University of Colorado Boulder’s Office of Victim Assistance on their website or by calling 303-492-8855.

Moving to End Sexual Assault provides support to survivors in the broader Boulder area. Information on their resources can be found here or by calling 303-443-7300.

Selena Powell remembers the protest at the Pi Kappa Alpha fraternity chapter house on Nov. 5, 2021, as a moment of community support against sexual violence. Protesters with loudspeakers delivered powerful speeches about surviving sexual assault and climbed over fencing surrounding the house.

“I liked how the community came together, and I liked how I saw students supporting students. I’m happy that I could be the catalyst for that,” Powell, who was a freshman at the University of Colorado Boulder when she helped organize the protest, said.

However, one year after dozens of students marched to the PIKE fraternity house on University Hill to protest several alleged sexual assaults that occurred there, no criminal charges have been filed by law enforcement.

One case dropped, one ongoing

In late October last year, Boulder police said they were investigating two cases of alleged sexual assault that occurred at the fraternity house around Halloween: one on Oct. 24 and the other on Oct. 31. The Boulder County District Attorney’s Office declined to prosecute one of these cases, while the other is still open and under investigation.

Prosecutors dropped the first case on March 23, 2022. They believed they were unable to prove the charge of sexual assault beyond a reasonable doubt, according to the district attorney’s office spokesperson Shannon Carbone.

“The [district attorney’s] office would be unable to prove beyond a reasonable doubt that the victim was intoxicated to a level that she was incapable of appraising at the time the act occurred,” Carbone said in a statement provided to the CU Independent.

She added prosecutors believed they would be unable to prove the suspect knew the woman was intoxicated at the time of the incident.

The second case is still open as officials don’t have any information on the suspect, according to Carbone.

When she learned about the status of the two cases that gave her and several others the motivation to organize the protest, Powell said she was angry.

“It makes me mad because while it doesn’t make [the protest] pointless, because obviously no protest is pointless, it definitely shows that nothing has been done,” she said. 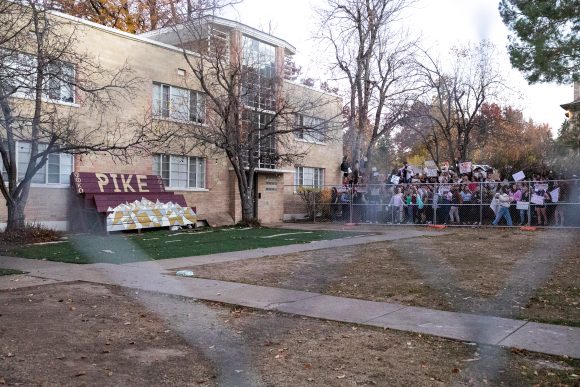 Students lined a temporary metal fence to protest rape culture at the University of Colorado Boulder in light of sexual assault allegations against members of the PIKE fraternity on Nov. 5, 2021. (Io Hartman/CU Independent)

The protest spawned amidst complaints from students that university officials and Greek life members weren’t doing enough to protect students from sexual misconduct. Since that time, both groups have taken some steps to build more trust with community members.

The Independent Interfraternity Council on the Hill, or IFC on the Hill, is the organization that oversees PIKE and several other fraternity chapters in Boulder unaffiliated with the university.

Since the protest, the IFC on the Hill has made some changes to the way their chapters address sexual misconduct. Finn Moylan, who became president of the IFC in December last year, said the group changed its bylaws to accommodate new training.

Moylan said the organization implemented three new types of training that are mandatory for all member chapters.

First, the organization required the fall 2022 new member class to attend a training with Teresa Wroe, the deputy Title IX coordinator and assistant vice chancellor of prevention education for the university.

Additionally, at least two of every 50 members of a fraternity are required to get a certificate from SafeBAE, an organization that typically gives online training to students on the basics of sexual misconduct prevention. The certified members are supposed to be available to then educate other chapter members.

Finally, each chapter is required to hold a question-and-answer session with an expert in sexual misconduct prevention by the spring semester. 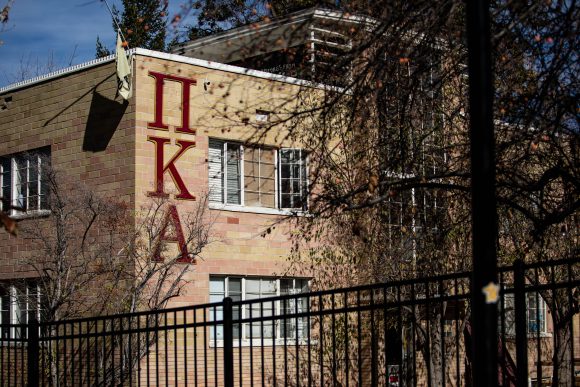 The PIKE fraternity house sits on the corner of Euclid and 12th St on Nov. 1, 2022 in Boulder, CO. (Io Hartman/CU Independent)

Moylan said he believes the new training has been successful and has heard good things about their implementation, at least internally.

“I haven’t exactly talked to other community members about what we’re doing because, ultimately, it is an internal thing,” he said. “We’re not doing it for other people’s views of us. We’re genuinely just doing it to make sure these problems are addressed in our community.”

Moylan declined to say on the record if IFC-associated fraternities had a problem with sexual misconduct.

“I’d like to say that while we make up a significant number of the Greek community, it isn’t our fraternities where [sexual assaults] are happening,” Moylan said. “But obviously, given the incident last year, that can’t be entirely true.”

“[Training] can’t be something that’s required from the outside…because that typically doesn’t work,” she said. “It would have to be something that the fraternities, the members and the leadership themselves, endorse.”

The IFC on the Hill’s new programs seems to fit this bill, giving some members the responsibility of helping other chapter members learn about sexual misconduct. 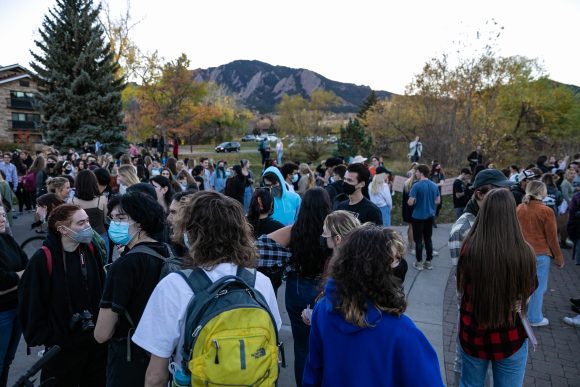 For its part, the university has made changes to its prevention and education efforts, though officials say the updates are not a response to any specific event or case of sexual misconduct.

University spokesperson Andrew Sorensen said CU Boulder can’t discuss the details of specific disciplinary cases, as doing so would be against federal law.

“While we cannot discuss specific cases due to privacy laws, our community should know that we take allegations of sexual assault seriously, and those found responsible are held accountable,” he said in a statement.

On Sept. 6, the university released a summary of the results from the 2021 Sexual Misconduct Survey. The survey, part of a 2015 initiative to gather campus sexual misconduct data, found that fewer CU Boulder students reported sexual misconduct but that the severity of the reported instances increased from 2015 to 2021.

The survey also found sexual assaults reported by female undergraduate students occurred at a Greek chapter house more than any other location. 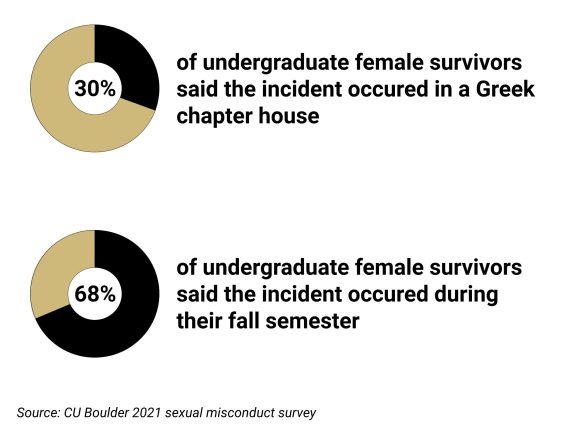 “Informed by the 2021 Sexual Misconduct Survey results, the task force is evaluating a range of innovative practices to prevent sexual assault on our campus,” Sorensen said.

Officials at the town hall said the first phase of the task force was to understand the 2021 survey results and how sexual misconduct impacts individual areas across campus.

The task force has not announced any specific steps it will be taking to combat sexual misconduct as of yet.

In order to reduce rates of sexual misconduct on campus, the university also plans to increase bystander training and educational posters, like the Office of Institutional Equity and Compliance’s “Just Because” campaign, on consent.

“Research is clear that education in college that focuses on people as potential victims or potential perpetrators is ineffective,” Vice Chancellor Teresa Wroe said in a statement. “Instead, we emphasize that we all have the potential to prevent these problems by being effective bystanders.”

Starting this last fall semester, university officials announced they started requiring new students to complete the Community Equity course on Canvas before they can set up any advising appointments or sign up for classes. The course is designed to inform students about university policy and resources on sexual misconduct. 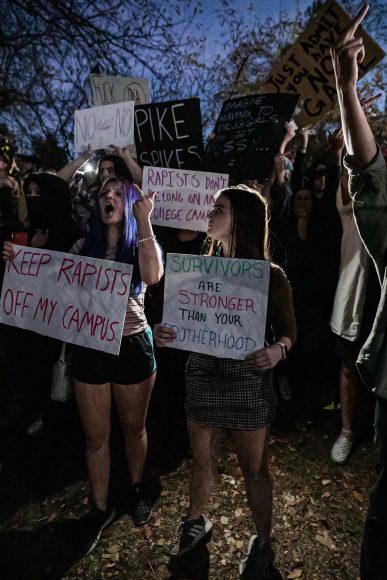 “We really knew we wanted to move that [course] up for our incoming students,” said Jessica Ladd-Webert, the director of CU Boulder’s Office of Victim Assistance, at the town hall.

In previous years, the university set the deadline at the end of the semester. Students were able to complete the course after the period when they are at most risk of sexual misconduct, the time between move-in and Thanksgiving break commonly referred to as the “Red Zone.”

“While we have a long way to go, and this is a very difficult social problem to address…we are oftentimes a campus that is many steps ahead of other campuses,” said Wroe, referencing the work of OVA and OIEC. 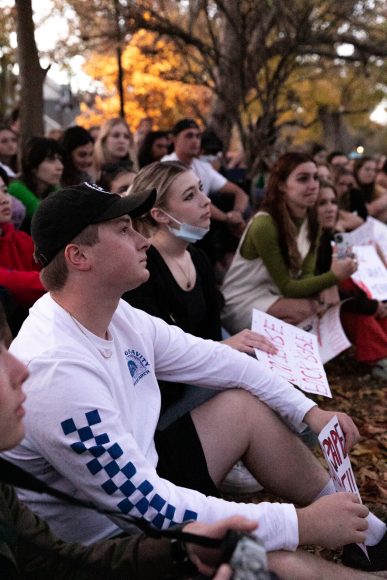 Students listened to protest organizers speak during the protest regarding sexual assault allegations and the PIKE fraternity on Nov. 5, 2021. (Io Hartman/CU Independent)

CU Boulder’s student activists don’t plan on quitting their work anytime soon. They’re still hoping for more communication, prevention efforts and resources from officials at the university and beyond.

In October of 2022, a new student organization calling itself “Students Against Campus Sexual Assault” (SACSA) held its first meeting. The group hopes to be a new voice against sexual misconduct but is still in the early stages of planning its efforts.

“We’re just brainstorming at our meetings with all our members and coming up with ways that we find are effective to call them [students] out and hold them accountable and educate them,” said SACSA co-founder Eswari Duggirala.

Some of these ideas include hanging posters that challenge rape culture, inviting guest speakers to meetings and compiling an overview of CU Boulder’s response to campus sexual misconduct.

Most importantly, Duggirala said she wants this group to be a place for students to feel supported while continuing to push for change.

“We’re hoping our organization will continue to grow over time and that it will become a really big outlet for students to support one another and feel empowered,” Duggirala said.

As for Powell, who is taking a year off from studying at CU Boulder, she said she’s hopeful for the future of student activism but wants to see more accountability at the university.

“There’s not a lot of accountability at CU Boulder,” she said. “There needs to be more preventative measures to reduce the number of cases so that there are less people hurt.”