Deion Sanders to be new head coach for Colorado Buffaloes 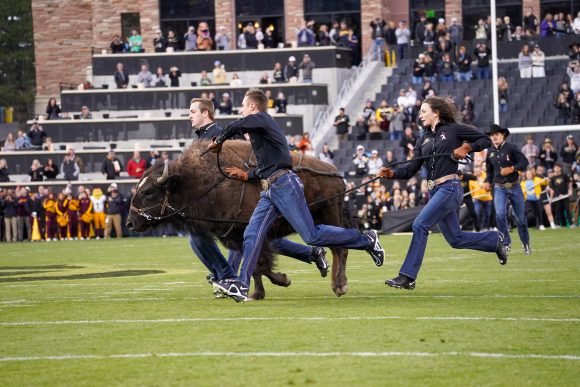 Ralphie runs across Folsom Field for the game against ASU on Saturday, Oct. 29, 2022. (Rachel Glazer/CU Independent)

Deion “Coach Prime” Sanders has officially been named the 28th full-time head football coach for the Colorado Buffaloes, according to an announcement by athletic director Rick George on Saturday, Dec. 3.

Sander’s arrival comes at a key moment for the Colorado football team, who is looking for a spark in the wake of a one-win season under former head coach Karl Dorrell and interim head coach Mike Sanford.

“There were a number of highly qualified and impressive candidates interested in becoming the next head football coach at Colorado, but none of them had the pedigree, the knowledge and the ability to connect with student-athletes like Deion Sanders,” said George in a press release on Dec. 3.

During his years as an NFL player, Sanders was known for his energetic personality on and off the field. In recent years, he has certainly proved himself as a capable coach and recruiter at Jackson State in Mississippi. Over the past three seasons, he led the team to a 27-5 record overall and 12-1 this season.

On Saturday evening, Dec. 3, Sanders led the Tigers team to the SWAC championship in a 43-24 win. Sanders addressed his future with his team after the game. With the hire, he will be Colorado’s fourth coach in three years.

Sanders has been offered a deal worth over $5 million per year with contract incentives that could increase his annual pay to almost 40%, according to CBS News Colorado.

Following this announcement, the influx of excitement has already been felt by fans and even school administrators.

“Not only will Coach Prime energize our fanbase, I’m confident that he will lead our program back to national prominence while leading a team of high quality and high character,” said George.

CU will hold an introductory press conference with Sanders, George and Chancellor Philip DiStefano at 1:30 p.m. on Sunday, Dec. 4.