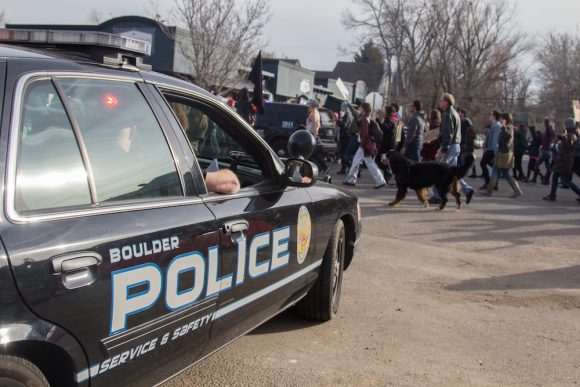 On Monday, Nov. 28, Boulder Police (BPD) said they were responding to a “man barricaded in a residence” near the Boulder County Public Health offices in North Boulder.

No officers or community members were injured, according to a press release from the City of Boulder.

On Monday evening, Lafayette police notified BPD that an armed suspect was holding a man and woman against their will inside a residence in the 3300 block of Broadway. Fleming knew the victims, according to police.

Boulder Police contacted the victims from the residence and tried to remove them from the back of the house. During this attempt, police said Fleming “engaged officers in an altercation” at the front door and refused officers’ repeated commands.

According to police, one officer discharged their firearm but did not hit anyone. The victims escaped through a window and Fleming barricaded himself inside the residence.

After receiving information that Fleming had explosives, officers evacuated people nearby while the Boulder regional SWAT and the Boulder County Bomb Squad responded to the scene.

At 12:37 a.m. Tuesday, Fleming surrendered after negotiations made by telephone and officers took him into custody. The bomb squad checked the residence and did not find any explosives.

Detectives issued a search warrant and found replica firearms and swords in the residence. Police took three dogs, all uninjured, to the Boulder Humane Society.