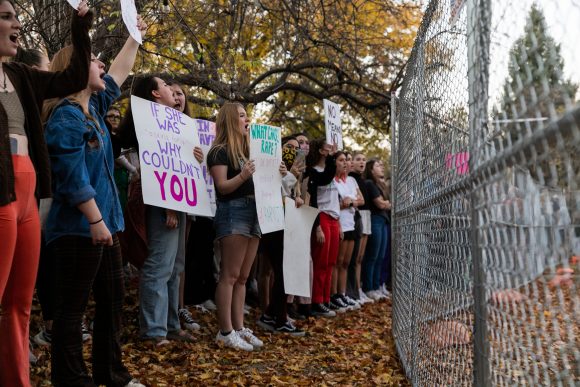 Students who have experienced a traumatic incident can contact free and confidential support resources through the University of Colorado Boulder’s Office of Victim Assistance on their website or by calling 303-492-8855.

Moving to End Sexual Assault provides support to survivors in the broader Boulder area. Information on their resources can be found here or by calling 303-443-7300.

Significantly fewer students at the University of Colorado Boulder were victims of sexual misconduct in 2021 compared to 2015; however, the severity of those instances has increased since 2015, according to a new survey published by the university.

The survey is intended to inform the new Sexual Misconduct Task Force on campus, which aims to help set university policy on sexual violence prevention in the coming months.

On Sept. 6, CU Boulder released a summary of the results from their 2021 Sexual Misconduct Survey. The survey is the next iteration of a 2015 initiative that studied similar patterns of sexual misconduct, including assault, harassment and exploitation, on campus. Originally, the university planned to repeat this survey every four years, but they had to delay it two years this time due to the pandemic.

“We were specifically interested in measuring behaviors and tactics that, for our jurisdiction, constitute sexual assault,”  said Julie Volckens, the director of assessment at the Office of Institutional Equity and Compliance (OIEC), who helped design both surveys. “So, we wanted to be able to talk about things that would fall under our policy [and/or] would fall under the state law.”

“I think the pandemic effect is substantial,” Volckens said. “People weren't together with other people [during the pandemic], and sexual assault is a crime of more than one person.”

“[The increase in severity] didn't surprise me, but I would have also expected that in the past as well," said Jessica Ladd-Webert, the director of OVA. "I'm not quite sure the reason for the change from 2015 to 2021 because we've been seeing people experiencing those tactics the whole time."

In 2015, 33% of undergraduate women and 52% of undergraduate men responded that they didn’t tell anyone about their sexual assault. In 2017, OIEC created the “Don’t Ignore It” website and campaign, which aimed to make the reporting process more straightforward and accessible as a direct response to the 2015 survey.

In 2021, the rate of undergraduate women and men who didn’t tell anyone decreased to 13% of women and 21% of men. Participants in both years most commonly told a friend or roommate about their experiences, and more people reported their cases to a university department. Officials attribute some of that change to the success of university campaigns like "Don't Ignore It" which hope to increase bystander awareness and reporting accessibility.

“We know [survivors] are going to go to friends first," Ladd-Webert said. "If those friends respond in a supportive, empathetic and empowering way, then that person is going to be more likely to reach out for help.”

Along with the second iteration of CU Boulder’s sexual misconduct survey, the university has decided to create a Sexual Misconduct Task Force. According to university officials, the task force is designed to reduce the rate of campus sexual misconduct through education and prevention practices. However, it will take some time for the task force to start working on initiatives as they are currently still analyzing the survey data.

“We didn't have the chance to give them the data [before the survey was published]," said Teresa Wroe, the assistant vice chancellor of prevention education and CU Boulder’s deputy Title IX coordinator. "So that's going to be our first step: having [the team] really understand these results and all the dynamics of this problem on our campus."

“It can't just be our small teams [at OIEC and OVA] making this big effort for the thousands of students that we have," she said. "We have to look more systematically. [The issue] has to be something we all understand."

Both departments plan to host a town hall meeting on Monday, Sept. 26 to talk about the task force and the 2021 survey results. During the Campus Sexual Misconduct Town Hall, officials will present data from the survey; however, they will not yet be able to share information about potential solutions.

“We want to engage the community about the survey results to sort of get that broader understanding, and then talk about some frameworks for the task force moving forward,” Wroe said.

According to Wroe, the task force has been designed to be “action-oriented” and intends to design three-year and five-year plans to address campus sexual misconduct. Though the task force will not be ready to present solutions during the town hall, officials say they'll start by considering solutions developed after the 2015 survey.

“The task force is really about fleshing out some of those ideas [from 2015] and then seeing what can really get traction: where we can really be effective and where we can see some substantial change,” Wroe said.

The town hall is open to all community members in room 235 of the University Memorial Center. Those interested can register to attend in person or via Zoom.