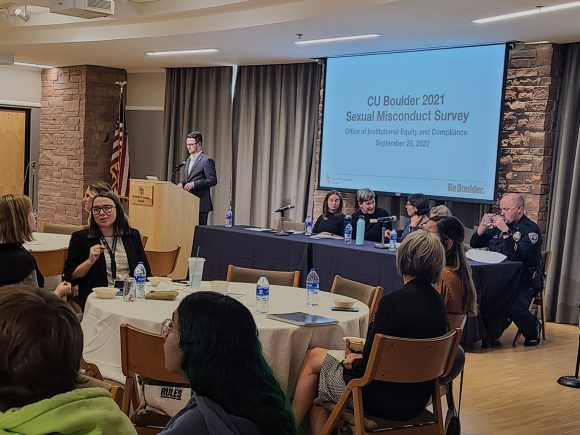 Fifty-seven percent of sexual assaults reported by undergraduates occurred during their first year at CU Boulder, according to new data from the 2021 CU Boulder Sexual Misconduct Survey.

The 2021 survey is part of an initiative intended to gather data about sexual misconduct on campus, six years after the first survey conducted in 2015.

At the town hall, university officials discussed data that showed 57% of sexual assaults reported by undergraduates occurred in their first year, while 29% occurred in their second year. Most first-year women reported that their assault occurred soon after the start of classes in August, with the highest number of reports in September, 39% of the total.

University officials then outlined how CU Boulder plans to address sexual misconduct on campus. According to Teresa Wroe, the assistant vice chancellor of prevention education and the deputy Title IX coordinator, the university aims to increase the number of bystander trainings to reduce victim blaming and to encourage reporting.

“The bystander model gives us the opportunity to tease out why it’s so typical of us, as people, to blame [victims] for something bad happening to them,” Wroe said.

Another update to the university policy included requiring that this year’s incoming students take the Community Equity course before Aug. 1, instead of by the end of the fall semester as in previous years. This course is designed to inform new students about university policy and resources to address sexual misconduct, among other issues.

This year, the Office of Institutional Equity and Compliance has also restarted the Just Because campaign, spreading posters that educate students about consent. 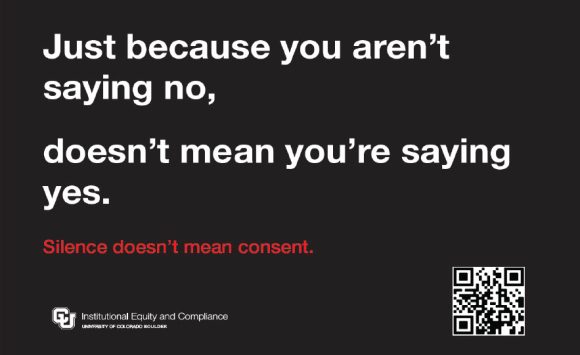 Poster for the Just Because campaign shown at the campus sexual misconduct town hall on Sept. 26, 2022. (Courtesy of the University of Colorado Boulder).

In addition, Wroe described how the Independent Interfraternity Council (IFC), the governing council for 21 fraternities on the Hill, updated its bylaws to require education on sexual misconduct for all members of its chapters. However, this change has not yet been updated on the IFC’s website.

The presentation concluded with an overview of the Sexual Misconduct Task Force, a body of CU Boulder faculty and staff created to address sexual misconduct through education and prevention practices. CU Boulder announced its creation on Aug. 26 in response to the 2021 survey results.

“The charge of the task force is phased,” said Llen Polmeroy, associate vice chancellor and Title IX coordinator. “Phase one is to take the report and to really understand it, [especially] how it impacts specifically each area on campus.”

After the presentation, the panel hosted a Q&A for community members to ask questions and voice concerns. Several attendees said that they were dissatisfied with CU Boulder’s response to sexual misconduct.

“Sexual assault on college campuses around the country are at epidemic levels,” said Carol Napier, the parent of two female CU Boulder students.

“What I have yet to see from this university is the kind of attention that an epidemic deserves,” she later added.

In response, officials said that the university had only started to look in-depth at sexual misconduct on campus since 2015. They added that the task force was a unique step forward and that CU Boulder is “many steps ahead” of other campuses.

“We tend to collectively, in our society, neglect prevention,” Wroe said. “We really need to keep our eyes on the prize in terms of prevention and to move that ball forward to that comprehensive approach. I feel like we’re well-positioned as a university to continue to do that work.”

The full list of members of the task force includes the following people: