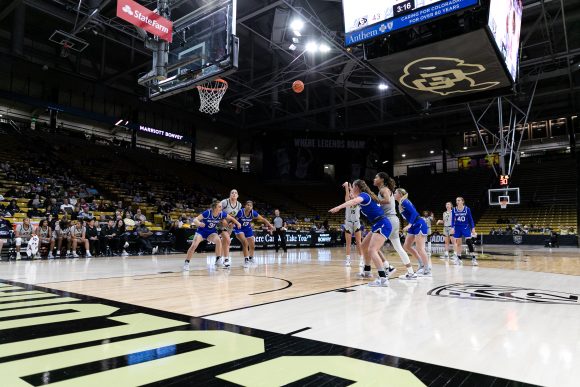 In a desolate CU Events Center, the Buffs returned home and executed the season’s most demanding win thus far. The Buffaloes faced the Western Michigan Broncos on Wednesday night and dominated 75-37.

The women’s basketball team walked onto the court in their all-white uniforms decorated with the local Flatirons. Although the Buffs carried themselves confidently, there were still some leftover doubts from Tuesday’s practice.

“I did not expect us to play that well,” said Head Coach JR Payne. “To be honest, we didn’t have a great practice yesterday. We did have a good shootaround today, but I thought we played really well tonight against a different style of team. They switch everything defensively, which we don’t typically see. I thought our defense really dictated our offense. I’m really proud of how everybody played tonight.”

The Broncos tried to secure a lead early in the first quarter, but it only lasted the first two minutes. Shutting down any offensive attempts by the Broncos, Colorado had numerous 6-point runs and a 13-point run in the final leg of the quarter. Western Michigan allowed seven turnovers that Colorado turned into 15 points. No matter how close the Broncos got to the net, Colorado would not let Western Michigan break their double-digit lead at 29-11. 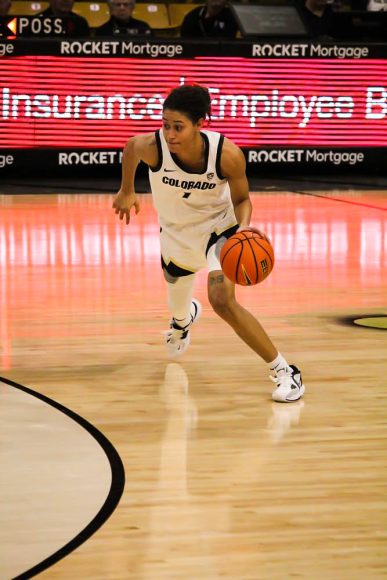 Following the first, the second quarter was one of the most demanding of the entire game. Carrying on from the first, Colorado continued their 14-point run-off, using the Broncos’ carelessness to their advantage. At their run’s peak, the Buffs secured a 30-point lead over the Broncos 41-11.

“We talked about different definitions of toughness going into the game,” said Payne. “It’s not bravado and chest bumping. It’s communicating when you’re tired. It’s getting back transition defense. It’s getting open when you need to. I don’t know if they took that to heart or they just did it, but I thought we played tough tonight.”

In the final quarter, Colorado started strong with an 11-point scoring run and hit the 40-point marker for their lead over the Broncos. The Buffs’ win marked the second significant milestone for head coach JR Payne. After Payne’s 200th career victory on Sunday, this win marked her 100th career win with the Buffaloes. 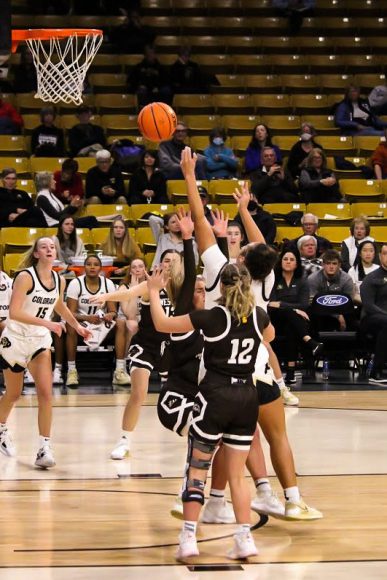 Freshman guard Jada Wynn lays up the ball during the fourth quarter at the game against Western Michigan University on Nov. 30, 2022. (Lily Wright/ CU Independent)

“I think we’ve worked hard to have a great staff and players,” said Payne. “I had a lot of old players reach out after 200, and I thought in every one of them, I was like, ‘Man, a lot of them were with you at the point guard’, or ‘a lot of them were with you hitting that jumper baseline.’  It’s been really a blessing to be here this long. I’m excited, along with these guys, to have many more.”

The Buffs dominated the Broncos in every statistical category, especially in the turnover department, where Colorado scored 33 points off turnovers as opposed to Western Michigan’s mere nine points from turnovers. The Buffs scored a whopping 50 points in the paint compared to the Broncos’ 16 points. Senior center Quay Miller led the team in points with 20, with Miller sophomore Aaronette Vonleh with 11 points and senior Jaylyn Sherrod with 10 points, also joining her in double figures. Junior guard Tameiya Sadler was also a standout player, recording seven steals and eight rebounds.

“We all know Tam is one of the most talented players on our roster,” said Payne. “She can do things that nobody else can. We need to be tougher. We need to be more urgent. She’s capable of doing that. Tam is an X-factor for us. She’s a difference-maker for us when she can play like that. It opens things up for other people. It creates windows for our post players. It can create transition buckets. We need Tam to play like that; clearly, she’s capable.”

The now 6-2 Buffaloes will play their next game against the Boise State Broncos (3-4 overall) on Sunday, Dec. 4, in Boise, Idaho. The game will be streamed through the Mountain West Network at 1 p.m.