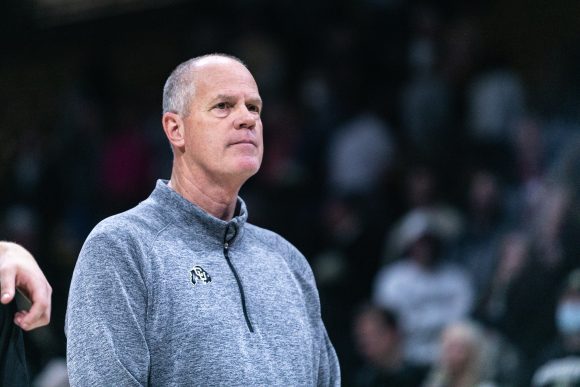 Head coach Tad Boyle looks towards the student section at the end of the home game against Nebraska that the Buffs won. Sunday, Oct. 30, 2022. (Io Hartman/CU Independent)

The University of Colorado Boulder’s men’s basketball head coach is one of the most underrated coaches in college basketball.

Yes, that coach is Tad Boyle, head coach of Colorado men’s basketball. The Colorado native is inexplicably overlooked despite his knack for developing professional-ready basketball players. The culture Boyle constructed the past decade has been on display the past few seasons, none more than in the past month.

Boyle and company secured the signatures of two ESPN top-100 recruits and another four-star recruit. Five-star forward Cody Williams is the crown jewel of the 2023 class. According to ESPN, the 6-foot, 8-inch small forward is the 14th overall prospect and the first five-star prospect in the Boyle era.

An always humble Boyle would not even take the credit for Williams’ choosing CU over LSU, Arizona and USC, among others.

The “best fit” can often be misleading in recruiting, as many recruits will choose a school based on playing time or prestige rather than a school that provides the most opportunity to grow, both on and off the court. Boyle is one of the best at making Colorado a place where kids can turn into NBA players instead of a place where stardom is expected from day one.

Not only was Boyle’s program’s culture a factor for Williams, but it was a big part of four-star guard Courtney Anderson’s decision to join the Buffaloes. Anderson, a native of the Bay Area, lead Dublin High School to an 8-1 record while averaging 20 points per game.

Anderson is not the first Buff to rave about the culture and former players that Colorado boasts. Former Colorado stars like McKinley Wright IV cannot help but be proud of Boyle finally getting some recognition, as he chimed in after the third top recruit committed to Boulder.

Assane Diop was the third top talent, in addition to Williams and Anderson, to sign for the Buffaloes. Diop is a four-star forward with great size at 6 feet 10 inches. Although a native of Senegal, Diop has played in Colorado for the last few years, and ESPN ranks him as the No. 2 recruit in the state and the 56th-best player in the country.
​
“I’m really excited about Assane Diop,” said Boyle. “He’s a terrific young man. First of all, he has a great personality and will be a great teammate. He’s got a huge ceiling and plays extremely hard. Great skill set for a big guy: he’s really not an interior guy.”

With Diop, Anderson and Williams committed, Boyle proved to the country that Colorado basketball is where top players can come to play high-level college basketball. This 2023 class exemplifies the growth of Boyle’s Colorado program and, it could be argued, represents the most talented pool of players he will have at his disposal come next season.

“(This class) has a little bit of everything,” said Boyle in a press release. “Great size, great length, great skill, great athleticism; three guys who are going to help make this program a lot better and we’re extremely excited.”

Boyle has every right to be excited about his future team, and so should Buff fans everywhere. The 2023 class is ranked as the 15th-best class by 247Sports, which is a huge accomplishment. Add in the returning players from this year’s squad and next year could be the most talented Buffaloes team ever.

The architect of this program is Tad Boyle, and he should be given major national props for his accomplishments in Boulder. He is closing in on Sox Walseth’s CU record of 261 wins, and with five more, he will be the winningest coach in Colorado history. He deserved more recognition even before this talented recruiting class, but now no one should underestimate Boyle’s Colorado program.