Column: Pac-12 Commissioner Larry Scott is out of touch with reality 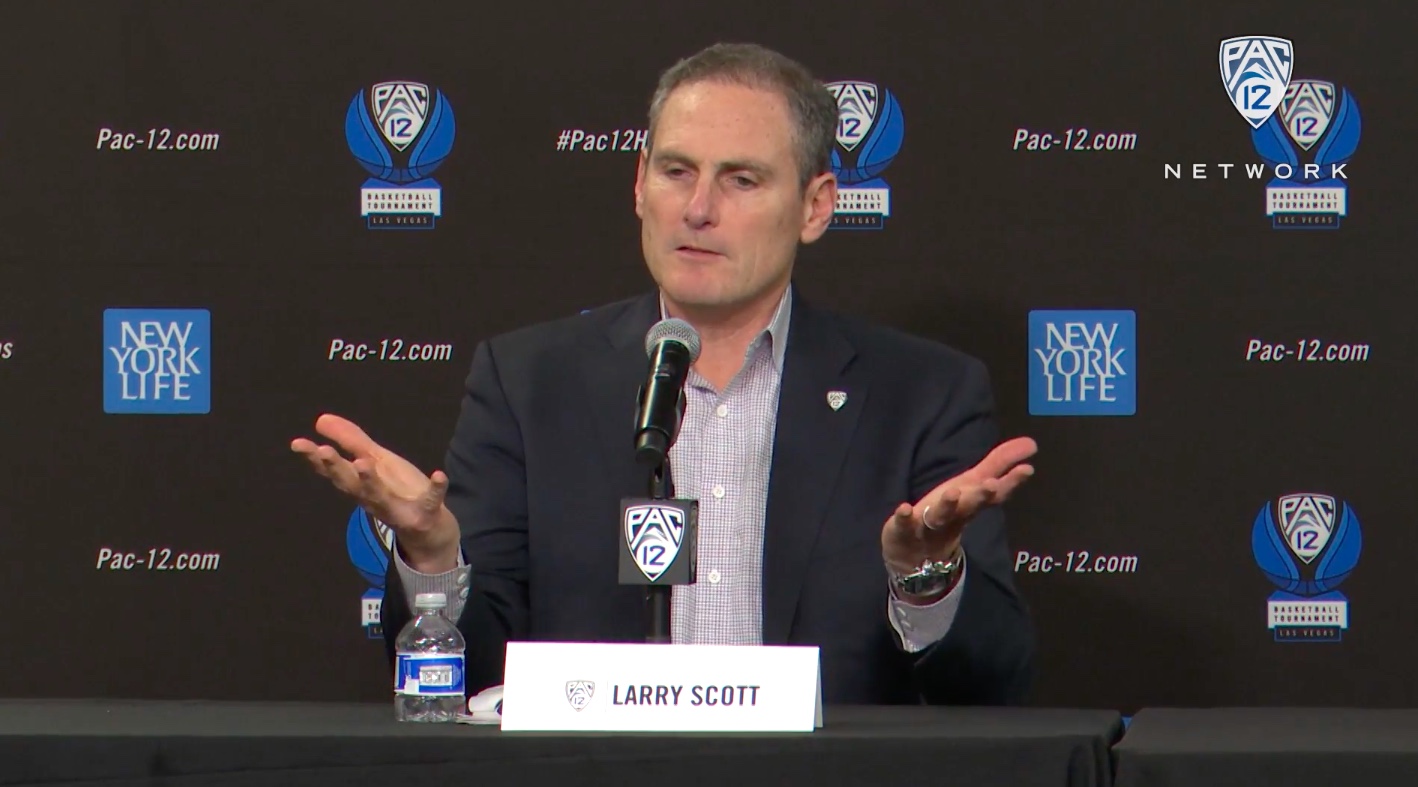 Pac-12 Commissioner Larry Scott deliver his annual “State of the Conference” address ahead of the Pac-12 Championship game against the Oregon Ducks and Washington Huskies on March 16, 2019. (Pac-12 Network)

About an hour before last week’s Pac-12 Conference Tournament championship between Washington and Oregon, Pac-12 Commissioner Larry Scott delivered an essential “State of the Conference” speech to gathered media at the T-Mobile Arena in Las Vegas.

Scott, flanked by University of Colorado Chancellor Philip DiStefano, who’s in his first year as chair of the Pac-12 CEO Group, delivered his remarks on multiple topics including but not limited to: attendance at both the men and women’s Pac-12 Conference Tournament, future TV deals and the overall finances of the Pac-12 Conference.

Scott painted an optimistic picture of the state of affairs within the Pac-12, but is his depiction of things in line with reality?  The CUI’s Scott MacDonald says no.

For a bit of context, the Pac-12 Conference as a whole really isn’t doing too hot — certainly not as well as the deep-pocketed commissioner will make it out to be. And it’s most certainly not financially proficient either.

Before the Pac-12 Tournament had started, Scott made the rounds around national media when John Canzano of The Oregonian reported that he’d be staying in a $7,500-per-night suite at the swanky Aria hotel on the Las Vegas strip. With his humble room comes a private butler, two floors and 3,300-plus square feet for the conference’s commissioner to stretch his legs.

Though the casino reportedly comped the room as a ‘thanks for choosing Vegas’ and its MGM suites as its tournament destination since 2013, it’s decidedly a bad look for the Pac-12 and its commissioner.

And how fortuitous it would be that enjoying the Pac-12 Championship game two seats to my right, was an MGM Operations staff member. For privacy reasons, I will leave his name out of this. Let’s just call him ‘Mr. MGM.’

While I can’t officially say his title, let’s just say he was a very sharply-dressed man, who was apparently high-ranking enough to get on the court while the Oregon Ducks celebrated their championship victory after the game, something my colleague and I weren’t even allowed to do as credentialed media personnel.

Turns out some of the comments and snide remarks I’d hear throughout the game from Mr. MGM would perfectly juxtapose and undermine what I’d heard from Scott in his address earlier that night.

To start, Scott has been in hot water in the past for his reported $4.8-million-a-year salary, which is more than the Big Ten’s and SEC’s commissioners make combined, and for the strain that the nearly $7 million in annual rent that the Pac-12 headquarters in San Francisco, California — close to four-times as much as the SEC’s and Big Ten’s rent combined — is putting on league finances.

This, amid the noted financially woes of the conference, was something one of my media counterparts probed the Pac-12 overseer for. The reporter asked about how Pac-12 programs’ athletic directors have been asking about the conference’s budgets but were told the information is for presidents only, to which the commissioner quickly shrugged it off.

“That’s certainly a mischaracterization,” Scott said in his press conference. “We have several layers of member input into our budget setting and our review and there have been a few other things misreported.”

Scott continued his roundabout answer for nearly a full page of transcription.

“There’s an audit and finance committee, like all organizations that subscribe to good governance have,” he continued. “…the top financial people at our universities are on our audit and finance committee and involved in reviewing our expenses…and work with the auditors, with management present, without management present, to be satisfied that everything is handled at the utmost of prudence.”

While sure to focus on he and his committee’s prudence and proper fiscal governance, Scott, too, resigned to the fact that there were multiple media accusations of the aforementioned.

“And so we regularly review our expenses compared to our peers. We are right smack in the middle of Pac-12 Conference expenses compared to the SEC, ACC, Big Ten, and Big 12,” Scott continued. “In fact, that was one of the areas that we reviewed this morning, because recent media reports questioned whether Pac-12 Conference expenses are in line or not with our peer conferences.”

Aside from the conference’s hidden budget, there is another big failing expenditure on Scott’s behalf: the Pac-12 Network. It was another point of emphasis in the press conference.

The independently-owned network has been in a bit of a tailspin since AT&T U-Verse dropped the Pac-12 Network at the end of 2018. Some estimate 500,000 viewers were lost as part of the decision. Scott made it well-known that he’d love to partner with DirecTV, which reaches 20 million households worldwide. The only problem for Scott and his poor-performing Pac-12 Network is DirecTV doesn’t want to do business with them.

“Our team would do a deal with DirecTV tomorrow if they were willing, but they haven’t expressed any willingness to enter into an agreement with them,” admitted Scott. “But our team is out there all the time talking to the online services. Yes, the offer is open to DirecTV if they want to take the service.”

The Pac-12 is struggling on the field and on the court, while attendance reflects those performance-related woes

Pac-12 teams themselves haven’t necessarily been television worthy as of late. The conference’s football teams went 1-8 in bowl games, the worst Power-5 postseason performance in history. Pac-12 basketball was pretty atrocious, as well.

The conference finished dead-last of the Major 7 conferences in its teams’ records against non-conference opponents. And for the first time since the 2011-12 season, the Pac-12 didn’t have a team finish in the top-25 at the end of the calendar year.

Mr. MGM wasn’t pleased with the product that his company was hosting either.

“This game is going to put basketball back 15 years,” I overheard Mr. MGM say while on the phone. “There’s maybe 9,000 [fans] here at best…these teams don’t travel well…not enough talent, neither of these teams…”

Mr. MGM brings up a good point. While he was off on his 9,000 attendance metrics — it was actually 12,877 — it’s still low. In total, the tournament brought in 69,024 fans, the lowest number its attracted since the 2013 tourney held just 63,750. It’s been trending down at an alarming rate, too. Since the tourney peaked in 2017, the inaugural tournament at T-Mobile Arena, the attendance rate has been decreasing rapidly, dipping down 11,000 from last year’s tourney to this year’s.

But the reality is, it’s been a down year for the Pac-12, in football and basketball. Even Scott will admit to that.

“This has certainly been an interesting year of Pac-12 basketball, below par, by Pac-12 standards, no doubt,” said Scott.

“At least it’s a close game, as boring as it is,” the MGM rep said.

In the second half, he made his distaste of the ‘boring’ game known once more to his friend, as Washington struggled to put points on the board.

To be fair, the excitement of a single game, or any of the commissioner’s schools’ performances, aren’t exactly his fault. Nor are the onslaught of scandals at his schools that have be dug up this season. It was another talking point of the media in Scott’s Saturday press conference.

Yet another bad look for the Pac-12 brand and its commissioner are the sundry of scandals that have ransacked the conference throughout the season. From the recent USC admissions scandal to Arizona Wildcats’ longtime head coach Sean Miller, who’s found himself, as well as his assistants, in hot water amid a recruiting scandal.

“We’re certainly concerned about when any of our schools are embroiled in an investigation like that, there are accusations like that, that’s a concern,” said Scott. “Our schools that were involved took some swift action in certain instances, but there still are some lingering issues, as you mentioned. And certainly been a big distraction for that program and unwanted attention for the conference, there’s no doubt about that.”

That’s about all Scott had to say about that scandal. But just as quickly as one was swept under the rug by Scott, another was presented by a media member. This time, the question was raised about the Pac-12’s nationally-noted poor officiating issues.

The latter issue earned a comment from the MGM mystery man during Saturday’s championship game. When Washington’s Noah Dickerson was called for a personal foul at the 8:32 mark of the second half, the arena erupted with boos of disagreement by the official’s call, as has happened many times during  Pac-12 games.

“I’ve seen some bad calls but this is awful,” I overheard Mr. MGM say to a nearby arena media operations staff member sitting in the row in front of us. Like the entire arena that was raining “boo’s” down on the officials, the operations staffer, too, agreed whole-heartedly with the bad call.

The prospect of poor officiating was brought up in Scott’s earlier press conference, too. The Pac-12 has become well-noted around the league for its at-times atrocious refereeing.

“[The] second major item we reviewed was football officiating,” Scott said in his opening remarks about what the Pac-12 higher-ups had met about. “…We’re going to be conducting similar reviews for men’s and women’s basketball officiating as well, which we feel is in good hygiene, good governance, something we should probably do every few years anyway, as we’re constantly looking to improve [and] be as good as we can in the area of officiating.”

Nothing of substance, no answer, no fix. Like many of the ‘major topics,’ as Scott referred to them as.

Regarding the Pac-12 football championship game location. In January it was announced that the Pac-12 and Levis’ Stadium had come to a mutual agreement to end their partnership after 2019.

Maybe another’s contract will be expiring — or, perhaps terminated — soon enough, too. The Pac-12, its athletic directors, its programs and its fans are looking at you, Mr. Scott.

While the Pac-12 conference is certainly in gilded hands — at least for now — it is most certainly not in good ones. In more ways than one.

After the Oregon Ducks had won the Pac-12 Championship, and the bow was being placed on top of another so-so tournament, tragedy nearly took place. As Commissioner Scott was ready to pass the conference’s trophy to Oregon freshman Bol Bol, Scott’s almost dropped the trophy.

In a way, it was a very poetic metaphor for how he’s handled the Pac-12 Conference: with very little care.