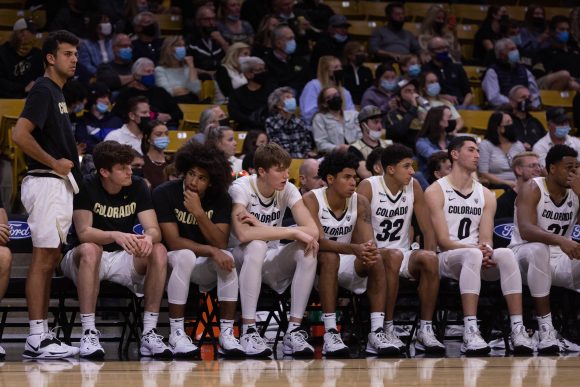 The Buffaloes watch the final seconds tick down during the second half. Dec. 4, 2021. (Kara Wagenknecht/CU Independent)

The Colorado Buffaloes fell victim to the Kennedy Chandler show in Boulder on Saturday afternoon at the CU Events Center. The Tennessee freshman phenom gave the Buffs all they could handle in a 69-54 defeat against the No. 13 Volunteers.

Chandler, an All-American, got to the basket at will for the Vols and scored 27 points on 13-20 shooting from the field. His speed and finishing ability at the rim made it a long afternoon for the Buffs’ defense.

“Today, they had Kennedy Chandler, and we didn’t,” said head coach Tad Boyle. “He was the difference in the game. We had no answer for him.”

It wasn’t only that the Buffaloes didn’t have an answer to Chandler on defense, but they had no one to replicate his production on offense. The Buffs’ offense held them back tonight, shooting a measly 34.5% from the field and turning the ball over 15 times, including 12 in the first half.

A big problem with the CU offense was having eight shots blocked in addition to the 15 turnovers. This combination resulted in Tennessee having five more possessions than the Buffs and scoring 21 points off the 15 turnovers, which ultimately sealed CU’s defeat.

“We have 15 turnovers, and we have eight shots that are blocked,” said Boyle. “That’s 23 times it doesn’t even get to the rim. At least if it gets to the rim, we have an opportunity to get an offensive rebound and a chance to go in.”

It was a frustrating type of game for the Buffaloes, who have now lost to two top-15 teams in the span of four days. Both the game against UCLA and Tennessee were games Colorado could have won, but at this point in the season, they are a team that is only playing well in spurts.

“We have to share the ball (to beat top teams),” said senior forward Evan Battey. “It’s both sides, offense and defense. We need to be better team defenders and share the ball, so the little things are better. I don’t think we’re far away.”

Colorado’s leading scorer was Evan Battey, with 12 points, and no guard scored more than seven points. Guard play has been an issue from the Buffaloes, with only three Buffs guards scoring in double-figures in the last four games. A lack of consistent production, both scoring and distributing the ball, has limited Colorado’s offense from gaining any rhythm.

“Our guards, number one, need to take care of the ball,” said Boyle. “They need to think about their teammates. Think about how can I make this team get a great shot every time. KJ (Simpson) is a good scorer, Keeshawn is a good scorer, not that I don’t want them shooting or taking shots, but they’ve got to think how do we get Jabari (Walker), Evan (Battey), and Tristan (da Silva) more involved?”

The Buffs will try and bounce back from their small two-game losing streak again when they host Eastern Washington on Wednesday at 6 p.m.