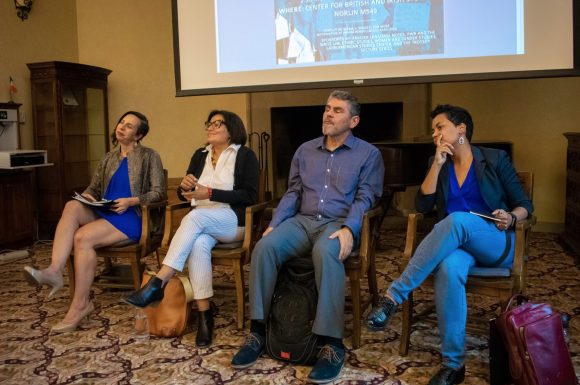 The University of Colorado Boulder hosted the event “LatinX: A Roundtable on the X”, where scholars debated the use of the word Latinx in the Spanish vocabulary, on Friday.

“Latinx” is a widely debated gender-neutral alternative to the gendered Spanish identities “Latino” and “Latina.” The roundtable was organized in an effort to provide multiple perspectives on the term Latinx and whether LGBTQ and Latin American communities should continue to advocate for its widespread use.

“Students in 2018, they think all their binary-busting and gender non-conformity is new, but it’s actually old. It’s very old,” López said, disputing the notion that the idea of Latinx emerged arbitrarily in the 21st century.

As an example of the Latinx identity in history, López discussed the life of Basque conquistador Catalina de Erauso, drawing details from the popular memoir Lieutenant Nun: Memoir of a Basque Transvestite in the New World. Erauso was born biologically female in the late 1500s but presented as a man throughout their adult life.

This was not the only defiance of societal norms seen in Erauso’s life, López pointed out.

“Erauso helps us see that identities and solidarities are mutable, strategic, and often, in conflict,” López said. “They’re a colonizer, but their people are oppressed. We might also want to dismiss them as a racist, misogynist conquistador or we might want to embrace them as a sexy, swashbuckling lesbian hero.”

For López, the term Latinx captures that in-between relationship. Claudia Milian shared a similar view, with the X in Latinx as the space between the Os and As, changing what it means to be Latino or Latina in the United States.

Milian referenced an article by journalist Ed Morales where Morales argues that “Latinx represents a queering of Latino.”

Milian also points out the ethnic ambiguity of Latin Americans who consider their home to be within U.S. borders, despite the political backlash.

“Latinx represents an openness that is increasingly under threat in a political climate that is most intent on drawing borders, keeping outsiders out and using violence to keep it that way,” Morales wrote.

Rodrigo Lazo, however, urged skepticism surrounding the term Latinx, calling it the “latest installment in the deconstructionist impulse of our time.”

Lazo quoted an article by Richard Rodriguez which criticizes Latinx’s restrictive nature, claiming that it is valued more in “English-speaking, academic and class-ascendant communities.”

“It strikes me that this debate is about studies in academic settings more than about politics under the repression of the Trump administration,” Lazo said, referencing a recent article from the Washington Post, which talks about the State Department’s refusal to renew passports for American citizens.

To end the talk, Kristie Soares brought the conversation back to support for the term Latinx, encouraging dissidents to avoid preoccupying themselves with the awkward linguistic nature of the term. To Soares, what really matters is the framework that Latinx provides for nonbinary representation in the Spanish lexicon.

“If you feel excluded by the gender-neutral term, you probably feel included literally everywhere else,” Soares said. “What we’re excluding is normativity, and normativity should be excluded.”

Freshman Rose Rivera expressed her love for the roundtable, appreciating the history of the term.

“I didn’t know how deep the history of the term Latinx went, and it was really eye-opening to know that something so gender-neutral has been around for so long,” Rivera said.

“This session was really educational for me because it’s like ‘Wow, now I can take this and then do more research and then educate other people,’” Hill said.