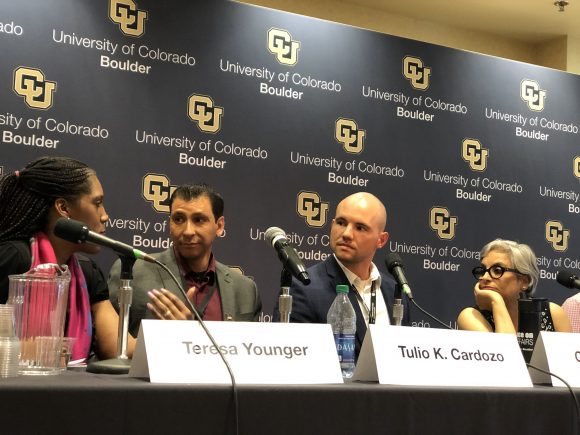 This year’s Conference of World Affairs at the University of Colorado Boulder welcomed a diverse selection of panelists to discuss whether masculinity is toxic. The panel comprised of a formerly incarcerated tech professional, an academic in ethnic and gender studies and a former NFL linebacker-turned-meditation specialist.

“We need to be interrogating the notion of masculinity itself, what do we mean by that?” said Priya Jha, panelist and Chair of the English Department at University of Redlands. “And the notion of toxicity. We just kind of put those two words together and that’s supposed to be legible to us, but whatever its legibility is, it’s always negative.”

Following an invitation to share their initial thoughts with the audience, panelists explained their semantic qualms and engaged with the topic at hand.

“The privilege of privilege is not noticing the privilege,” said panelist Jerry Michalski, a technology expert who promotes change through his company ReX. This quote, Michalski said, was one he once heard that deeply resonated with him.

“I won’t pretend to understand the nuances of this concept and the conversation,” said Chris Borland, former NFL linebacker and upcoming media producer. Borland admitted that he is still new to the conversation of toxic masculinity, having googled the term two hours prior to the panel.

“The phrase ‘toxic masculinity’ itself is shaping the conversation in positive and negative ways,” said student attendee Grayson Cunningham, who recently began the process of crafting an honors thesis on masculinity in the trans community.

Cunningham believes that some of the panelists were invited because of their experiences in masculine-dominated environments and found it interesting that some had never heard the phrase before.

“We also had an academic who hears it on a daily basis,” Cunningham said. “It’s a flashpoint in the ongoing conversation that people are reacting to the phrase ‘toxic masculinity’ rather than the phenomenon of toxic masculinity itself.”

Masculinity, according to Borland, simply refers to the qualities and traits we attribute to men.

“So masculinity isn’t fixed,” Borland said. “To be tough and rugged and masculine is not toxic, but incomplete.”

All panelists agreed in conversation that nothing about masculinity is inherently toxic, but that the institutions which promote ways of being masculine can perpetuate a toxic culture that society has come to tolerate, and in some cases encourage.

“We must allow men to embrace femininity and masculinity and dualities, and do so in a way that allows women to do the same without being critiqued,” said panelist Teresa Younger, president and CEO of Ms. Foundation for Women. Younger acknowledged that she could not solve the issue of toxic masculinity, but rather she “look[s] forward to engaging in conversation without knowing all the answers.”

Following this, attendees submitted questions to the speakers. One question focused on the toxic masculinity prevalent in CU fraternities.

Borland responded with underlying causes such as “underdeveloped brains,” “sexuality” and “fitting in,” all phenomenons he said were at play during his time in the NFL. Panelist Jerry Michalski proposed people “reimagine friendship” and brotherhood while Younger proposed to abolish the Greek system completely.

“Inevitably, frat boys become victims of that culture as much as they become perpetrators of it,” Borland said.

According to Younger, it’s an issue of humanizing one another.

“Our culture dehumanizes people who are any form of other,” Younger said. “We need to change how men talk to other men and how they hold each other accountable, not because it’s their mother or daughter or sister in question, but because that person is a human and they deserve respect.”