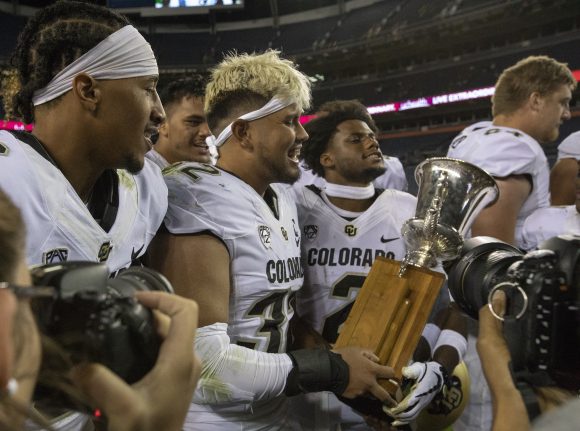 The 2018 football season began on Friday and the Colorado Buffaloes started the fall with a 45-13 win over intrastate rivals, the Colorado State Rams, emerging victorious in the Rocky Mountain Showdown for the fourth straight year.

Colorado looked sharp early on. From the first snap, junior quarterback Steven Montez displayed a noticeable confidence and commanded the attention of his offense. The Buffs were able to move the ball quickly and Montez later scored on a 38-yard touchdown run, as CU drew first blood and went up 7-0.

The drive lasted one minute and 24 seconds. Colorado displayed a momentum and speed on offense which would persist and plague CSU’s defense in the early stages of the contest.

“I think our guys have been kinda antsy to get on the field and I think that’s kind of what happened today,” Montez said.

With the Buffs on the board, the defense got the first look at CSU’s new senior quarterback K.J. Carta-Samuels, a transfer redshirt senior from the University of Washington. Carta-Samuels was itching to throw the ball. He seemed adamant about getting the ball to his receivers downfield but often would elect for either a run or short pass for a quick yard gain.

Colorado State looked sluggish offensively early in the game. Its first drive resulted in a punt, as did four of the Rams’ first six drives.

Montez was ready for another quick drive down the field and he delivered with a beautifully-floated 46-yard touchdown pass to sophomore wide receiver K.D. Nixon.

The drive lasted just one minute and 37 seconds.

Carta-Samuels and the Rams shortly thereafter got on the board, thanks to a 26-yard touchdown pass to Olabisi Johnson. However, that would prove to be the Rams’ biggest offensive success of the game.

Before halftime, Montez floated two four-yard touchdown passes to junior Beau Bisharat and senior wideout JuWann Winfree. The Rams chipped in a field goal as time expired in the second quarter, and after 30 minutes of play, Colorado held a commanding 28-10 lead.

“We didn’t run a bunch of plays today but we got a lot of yards and we were explosive and that’s what you wanna see on offense”, said Buffs head coach Mike MacIntyre.

Redshirt tailback Travon McMillian led CU with 46 yards on six carries as both teams left the field for halftime. Nixon was first on the Buffs with 112 yards receiving on six grabs.

Montez’s main blemish of the game was an interception he threw in the second quarter. Aiming for senior wideout Jay McIntyre, Montez lobbed a pass into double coverage that was easily picked by CSU’s V.J. Banks.

The second half was where the Buffs continued to control the game and the defense was relentless in exploiting weaknesses in the CSU offense. The defense only gave up six points in the second half, while the offense continued to use the weapons they have to put up 17 points.

“Clearly the hard work paid off during camp,” said sophomore inside linebacker, Nate Landman, who got an interception off Carta-Samuels in the third quarter.

The defense got better as the night went on, Landman continued, but what was impressive about tonight was the depth of talent that the Buffs have on offense. Montez said, “that things are starting to click” and with impressive performances from sophomore wide receiver, Laviska Shenault Jr. who earned 211 receiving yards, Nixon who earned 112, and McMillian with 103 rushing yards, the Buffs are looking to put in more work as they prepare for Nebraska. 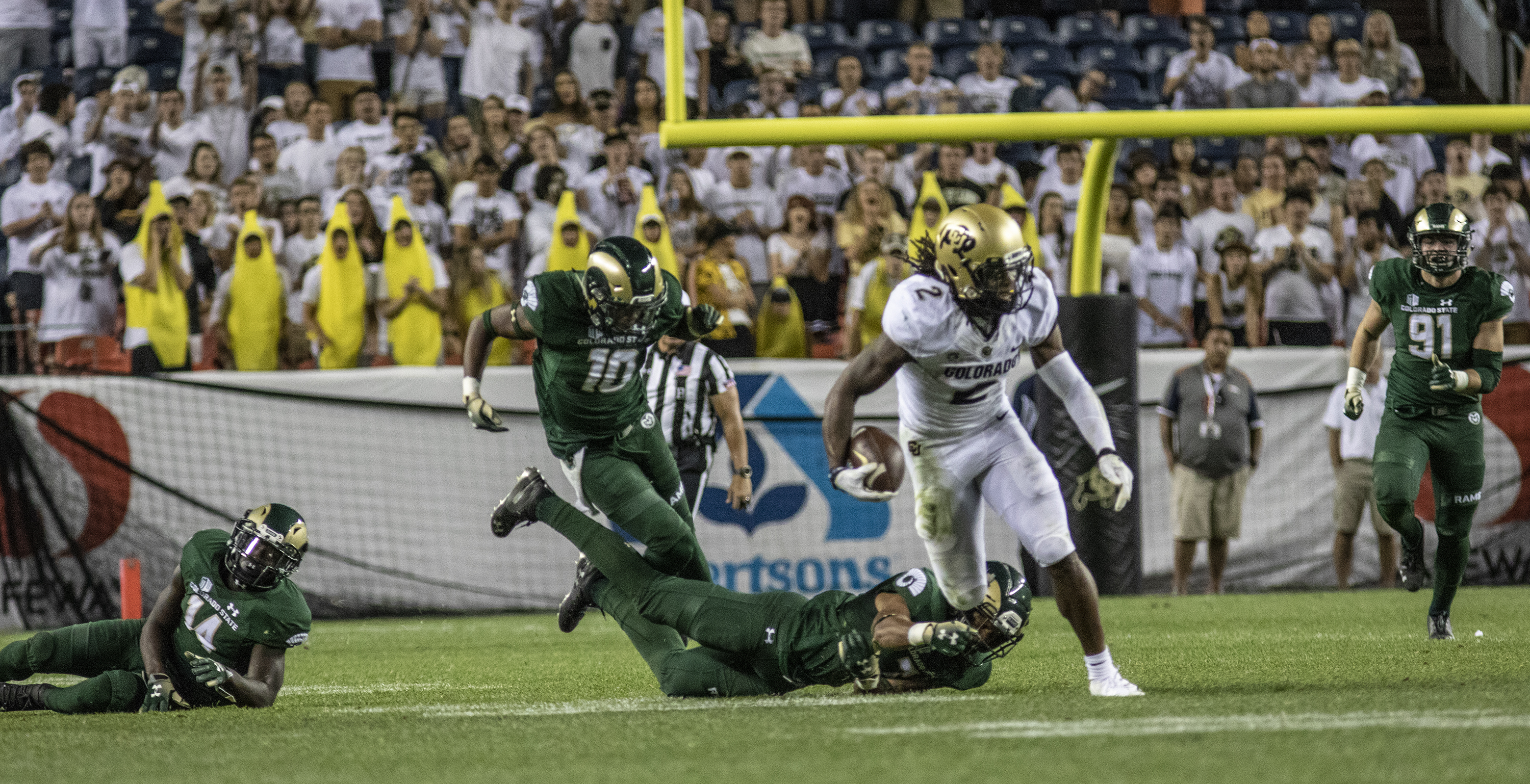 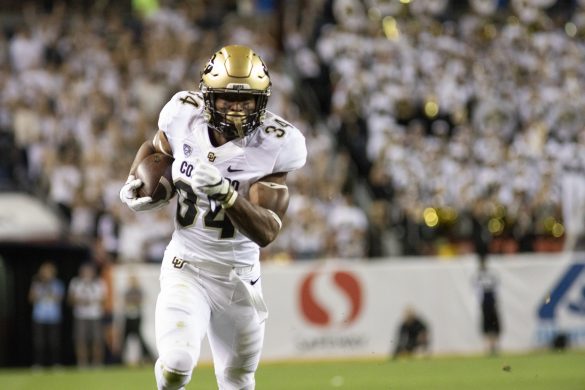 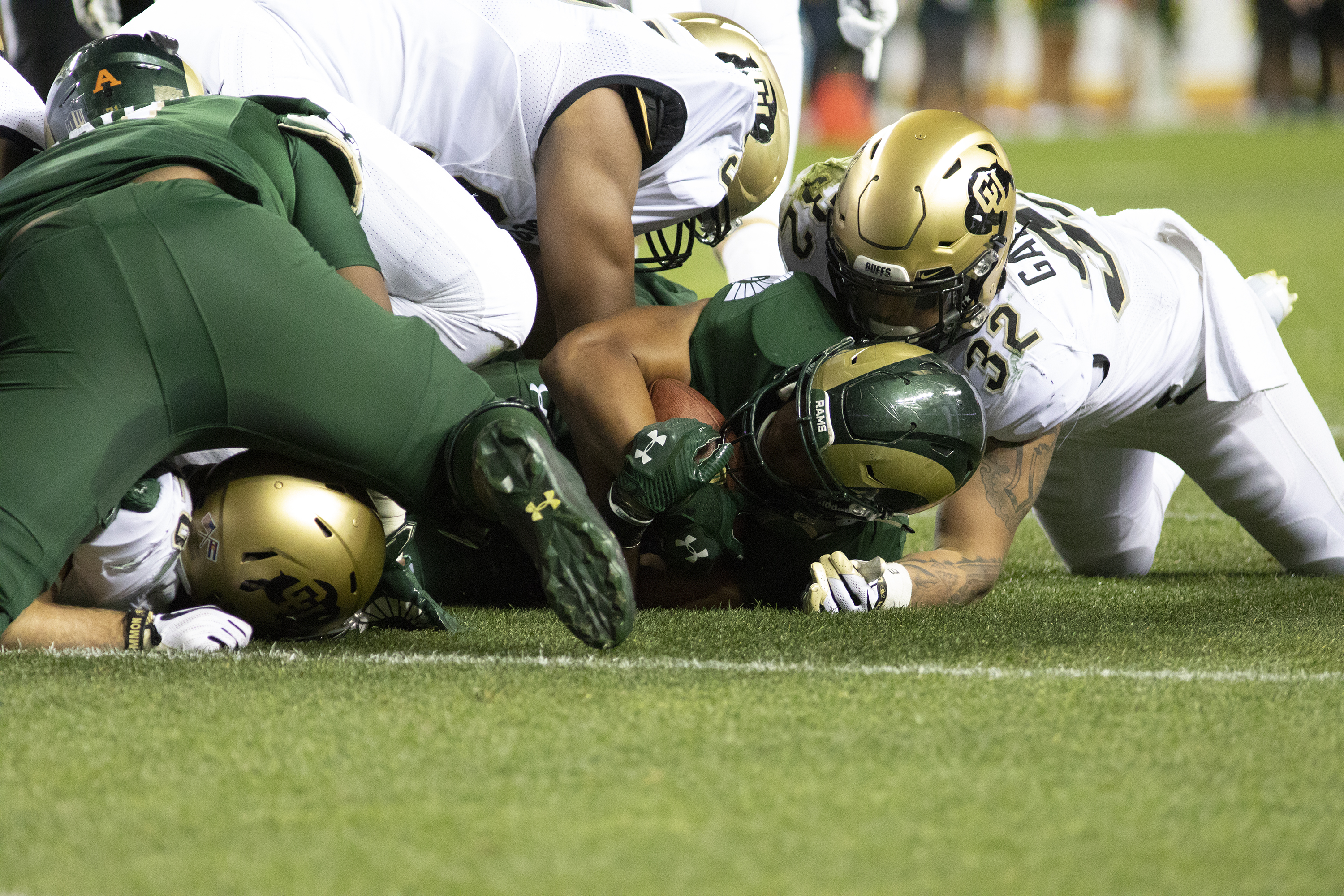 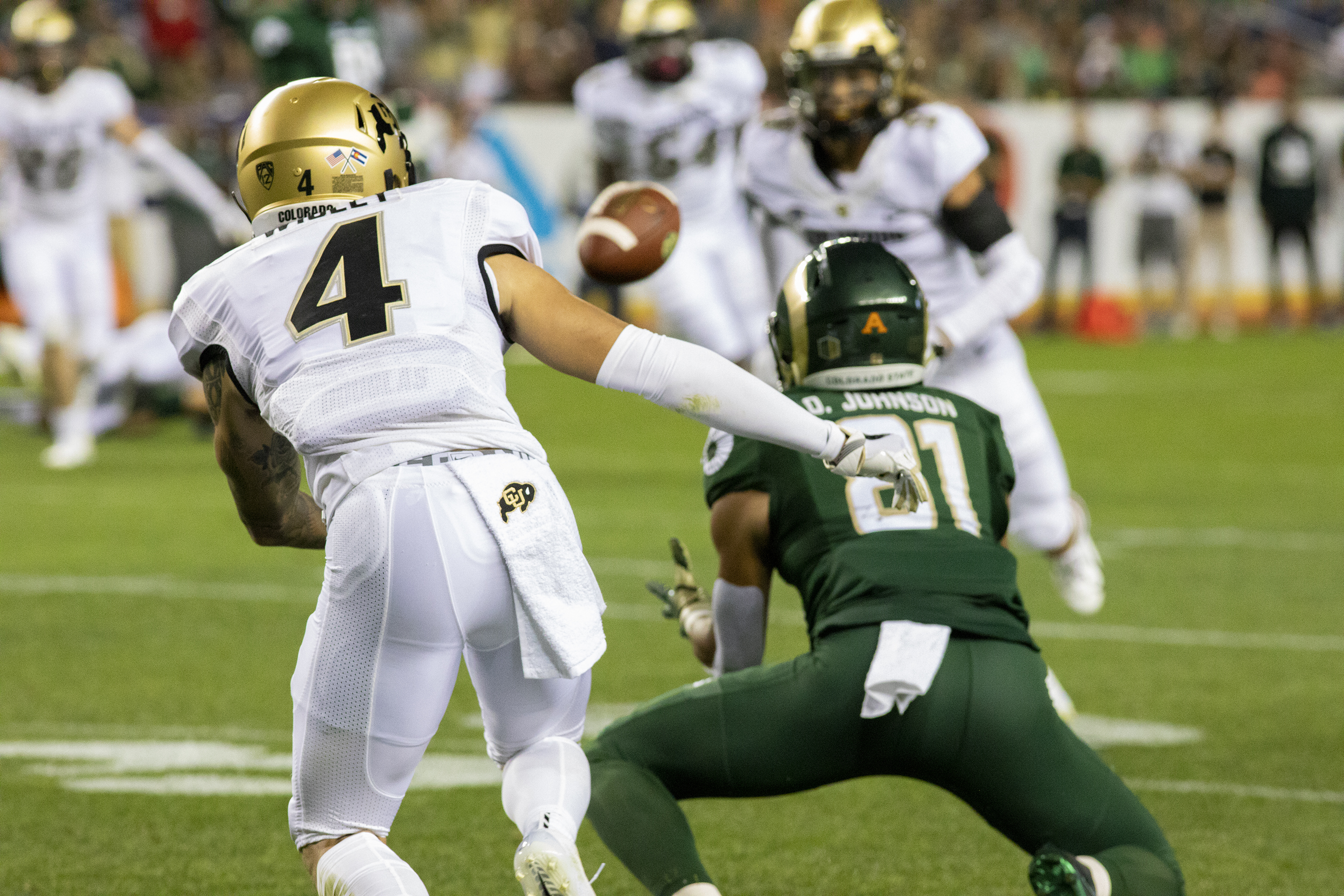 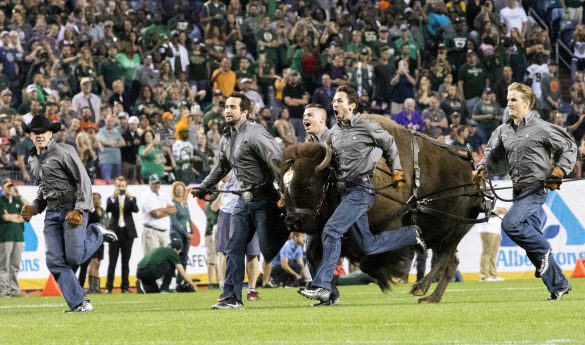 Ralphie and the Ralphie Runners make their way across the field. Aug. 31, 2018. (Bri Barnum/CU Independent File) 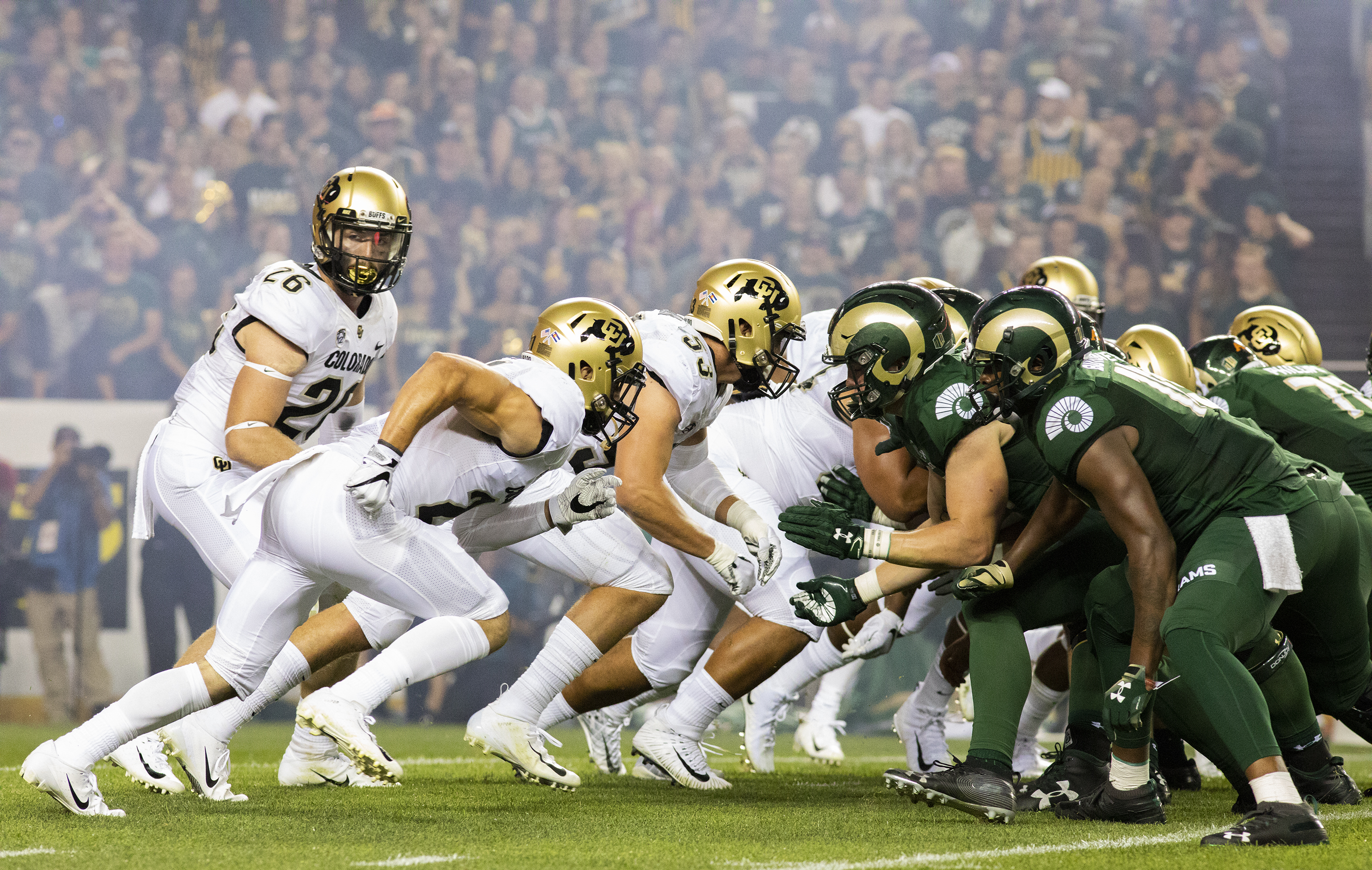