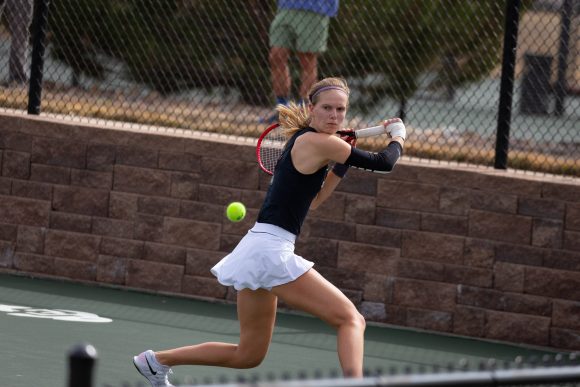 The University of Colorado women’s tennis season is underway, and the Buffs are off to a great start with a 7-3 (1-1 Pac-12) record. On Friday, CU opened Pac-12 play with a matchup against the No. 12 California Golden Bears at the South Campus Tennis Courts in Boulder.

Next up was the six singles matches, where Cal stormed out with wins in the No.5, No. 2 and No. 1 matches. Now down 3-1 in the match, Colorado needed wins in all three of the remaining matches to complete the comeback.

Despite the tall task, Colorado remained resilient as junior Megan Forster defeated No. 26 ranked Cal sophomore Valentina Ivanov. Colorado now needed singles wins by both Ecton and Campos, who were both in fierce battles with Cal sophomore Erin Richardson and Cal freshman Hanna Viller Moeller. Ecton faced match point twice in her match but never lost hope and fought back with a 3-2 victory. At the same time across the court, Campos was also in a fierce battle as she recovered from dropping the first set with a 7-6 set two victory. With victory close in grasp, Campos was dominant in the decisive third set, winning 6-2 and securing the Buffs with a momentous upset victory by a score of 4-3.

The win over No. 12 Cal was the highest-ranked conference victory since 2007 and the first time that the Buffs defeated a Pac-12 school that resides in California.

“We’re so proud of the progress this program made today,” head coach Danielle Steinberg said. “Just stepping on the court and believing that not only we belong, but we can win these matches. That’s a huge step forward.”

The Buffs had little time to celebrate their miraculous victory as the No. 28 Stanford Cardinal arrived in Boulder for a Sunday morning match.

Unfortunately for the Buffs, the magic from their last match seemed to run out as the Buffs were swept 7-0 by the Cardinal. The duo Nayar and Eggink picked up the first doubles win of the match, but Stanford proceeded to win the next two doubles matches and the following six single matches. Despite the loss, Colorado assistant coach Anthony Nguyen Pham was optimistic about the week.

“We’re proud of the progress we’re making, and the most important thing is we continue to get better,” Pham said. “We get back to practice next week and try to get better every day and focus on the next match. As a whole, we’re proud of how we competed this week and represented Colorado.”

Up next, the Buffs will continue Pac-12 play on Friday against the Oregon Ducks in Eugene.