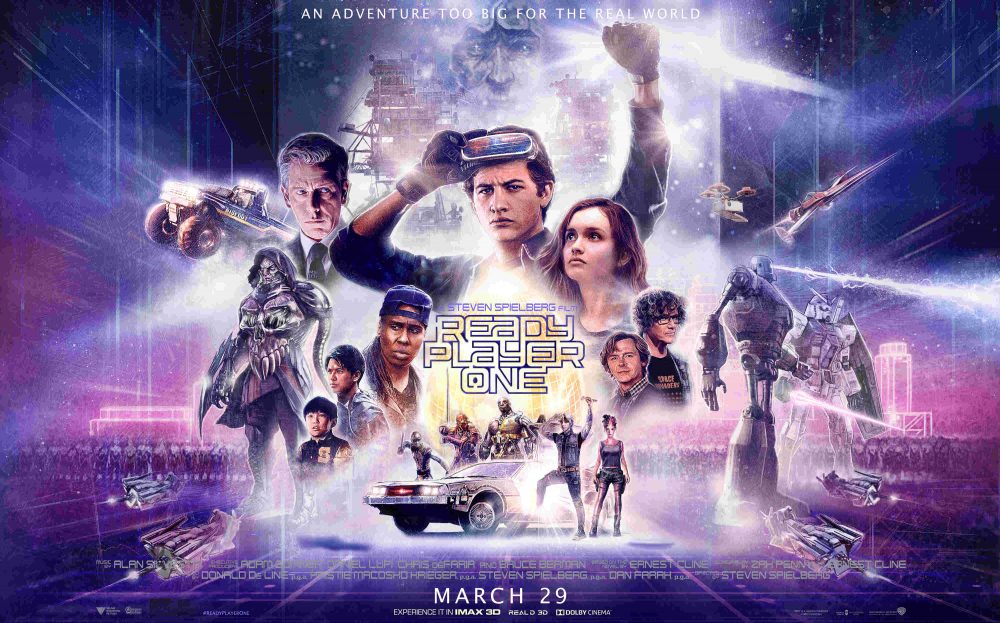 Steven Spielberg loves a chase. Early in his career, with the TV movie Duel and his theatrical debut, The Sugarland Express, he told the stories of characters being chased. Then with his landmark breakthrough smash, Jaws, he began to follow the chasers. Now, in his newest release, Ready Player One, Spielberg is doing the chasing. He’s chasing his past as the greatest, most prolific blockbuster director of all time.

Ready Player One is adapted from Ernest Kline’s 2011 novel that takes place in the year 2045. America is in ruins, so everyone escapes to the virtual world in the OASIS, a colossal online realm where anything is possible. The most surprising part about the movie and book is that the distinguishing feature of this dystopian future isn’t everyone lives in a virtual reality, but that everyone is obsessed with 1980s pop culture.

The explanation for this is that the creator of the OASIS, James Halliday (Mark Rylance) grew up in the 80s and adored every film and video game that came out in that decade. Halliday’s interests matter not only because he has shaped the OASIS around pop culture artifacts like King Kong and Back to the Future but because he died in 2040 and hid three keys in the OASIS that lead to an Easter egg that gives whoever finds it ownership of the OASIS and Halliday’s fortune. So everyone in the OASIS views Halliday as a deity and study his life and passions as if they are scripture.

Spielberg was at his peak in the era, a pioneer of the pop culture artifacts that Halliday adored and sprinkled across the OASIS. But Ready Player One is not that similar to all the hit movies he created in his prime.

However, like many of Spielberg’s best works, Ready Player One is a successful story about adolescent kids but this time, instead of riding bikes they are driving DeLoreans and Kaneda’s motorcycle from Akira.

Wade Watts (Tye Sheridan), or Parzival, as he is called while in the OASIS, is the story’s Marty McFly as Samantha (Olivia Cooke), or Art3mis, is his love interest on the motorcycle. Wade is a boring character and Sheridan’s bland performance doesn’t help. The corny dialogue isn’t helpful either. But when a Bee Gees song came on, Cooke was able to transcend lines like “Whoa, old school!” and steal the show in a movie that had great performances from Ben Mendelsohn (who played Sorrento, the evil CEO trying to spread malware across the OASIS) and Rylance.

Rylance did have one of the best, most sincere moments in Ready Player One, however. Wade asks Halliday, “If you’re not an avatar, then what are you?” Halliday, a lonely man who has created a phenomenon that fanboys are taking over as they view him as a god, gives the perfect non-response.

And it is with Halliday that Spielberg has started considering his own legacy. He’s become a god in his own right. He’s made Close Encounters of the Third Kind, Jurassic Park and the entire Indiana Jones franchise. But with Halliday he is saying he is not the avatar or character that fans make him out to be.

Ready Player One is the biggest movie Spielberg has made in over a decade but it is nothing like anything else in his filmography.

The OASIS is one of the most stunning and remarkable CGI achievements that Spielberg, a pioneer in film graphics, has delivered to the silver screen. It’s a spectacle that completely transports the audience from the real world into a video game. The way Spielberg drifts his camera from one visual sight to the next, as is his trademark, completely immerses the audience within the OASIS.

The movie is a fun ride if you can tolerate some poor writing, predictable storytelling and endless callbacks to pop culture artifacts from 40 years ago. It is also an interesting dive into Spielberg’s psyche. He can’t quite keep up with the fiery blockbusters of his past, but it is enjoyable to see him try to chase and recapture that magic he was once able to produce. And at some points in Ready Player One, he does.