‘Haze’ offers nothing new or interesting on college bullying problem 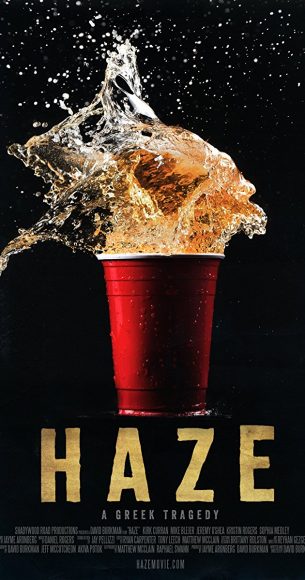 Last year marked the transition for movies about fraternities. With the release of Andrew Neel’s Goat starring Nick Jonas, the genre became a platform to make people feel  uncomfortable, unlike humorous films like Animal House and Neighbors. Writer and director David Burkman’s Haze is the latest frat-centered film to examine the barbarity of brotherhoods.

There is a key difference between the two films that makes Goat a substantially better examination of toxic masculinity within fraternities. Neel’s film reserves judgment on hazing, whereas Haze bludgeons viewers over the head with the same argument for nearly two hours.

Haze is set on a fictional college campus and centers on two brothers, Nick (Kirk Curran) and Pete (Mike Blejer). The two have diverging attitudes toward hazing, and this drives a wedge between them. This creates a dilemma for Nick where he must choose between his biological brother and his fraternity brothers.

At the start of the film, Nick pledges Psi Theta Epsilon. Meanwhile, Pete is working on a documentary about the dangers of hazing, filming student interviews and hidden footage of frats. Near the film’s end, we learn why Pete is so passionate about this topic. Having a character’s entire arc rely on a last-minute reveal is a lazy storytelling trope.

I don’t disagree with Haze’s sentiment, but the preaching by the film ruins the movie’s quality. Haze has no range. The tone of the film remains stagnant for its entire run-time despite attempts to implement a love story in this harrowing docudrama.

This isn’t to say the film falls flat on its face. Haze has its moments. One of these is the use of play The Bacchae as a way to compare the movie to a Greek tragedy, both in terms of Greek literature and the Greek system on college campuses. This is a nice touch, but it can’t save the film from its faults.

Burkman does little behind the camera. The film is shot in the aesthetic of a home video and isn’t pleasing to watch. The style makes sense since this shouldn’t be a pleasant viewing experience, but it doesn’t pair well with a story that isn’t worth watching.

The main culprit of Haze’s film-making downfall is the shift that happens during Hell Week. This is the film’s climax where fraternity pledges go through the most gruesome hazing of all. Pledges are forced to drink obscene amounts of alcohol, get branded and are sent to solitary confinement with a dog — not being able to escape until the dog is killed. All of this is captured by the frenetic camera style of a death metal music video. The video style is incredibly distracting and doesn’t add much to the movie. This dark, fuzzy aesthetic is more fitting for a horror film than a fraternity exposé.

It’s easy to understand why Burkman made this decision, however. He clearly wanted to juxtapose the image of a frat house with a house of horrors. This point is unquestionably made, but it could have been made in a more nuanced manner. Haze shouldn’t be criticized for its sentiment, but it should be criticized for the way it delivers its message.