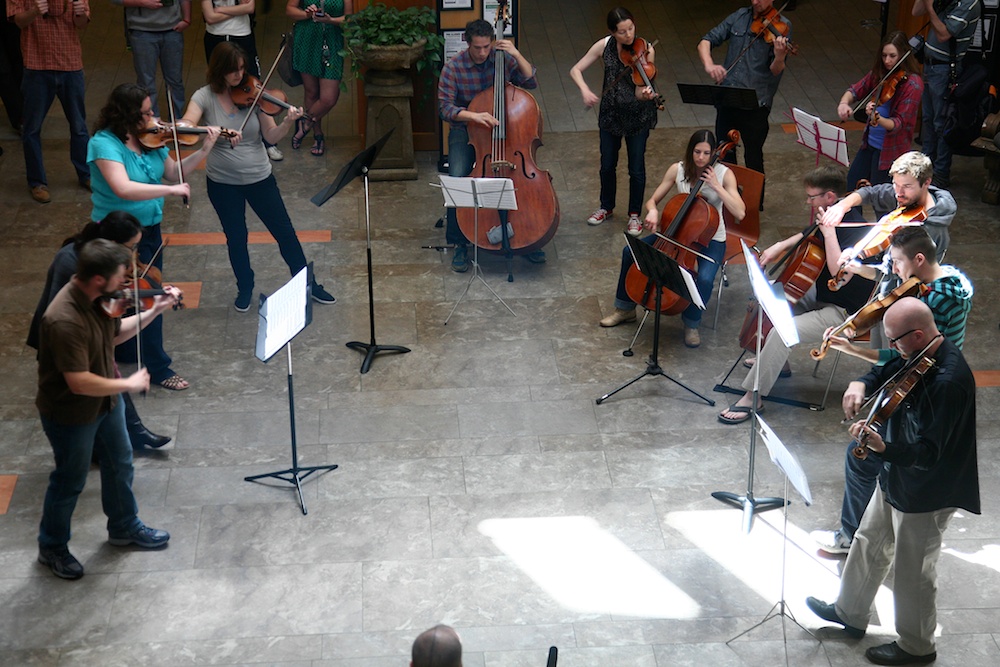 A flash mob featuring The Sphere Ensemble in the atrium of the Center for Community on April 21, 2014. The event was organized by the Housing and Dining Services. (Nate Bruzdzinski/CU Independent)

It all started with Mitch Montealegre’s bass. Then there was Beth Rosbach’s cello. Then a violin. And another. Soon, music flowed from all 13 instruments of the Sphere Ensemble.

The Sphere Ensemble, a local chamber ensemble featuring classical string instruments, performed two small “flash mob” style concerts in the atrium of the Center for Community on Monday, April 21. The first started just before noon and the second at 1 p.m., with each lasting approximately 15 minutes.

The concerts were part of a Housing and Dining Services effort to increase community involvement and give students a different dining experience. The ensemble played classical music and a few covers of modern hits, including Carly Rae Jepsen’s “Call Me Maybe.”

“I think it’s fantastic. It’s nice to have music playing in the C4C while you’re having lunch,” said Akshay Gavai, a graduate student pursuing a master’s degree in Business Administration.

As much as onlookers enjoyed the performances, the enthusiasm displayed by the ensemble’s members was also remarkable. Violinist Marcin Arendt danced his way around the atrium.

The Sphere Ensemble’s members are all professional bassists, cellists, violists and violinists from across the Front Range. The group has been together since 2011 and is focused on putting a “new spin” on classical music.