Donald Trump, through the rap songs that once loved him 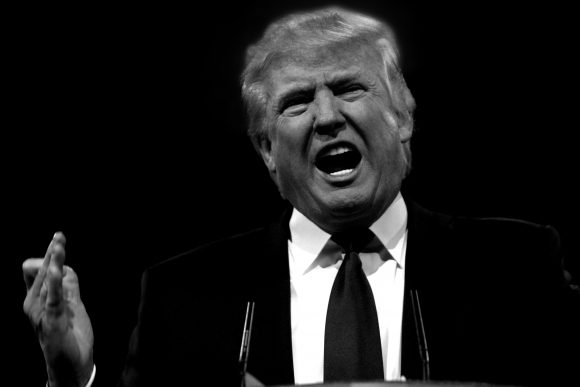 This piece was originally printed in CU Independent’s Spring ’18 edition of Syllabus. Find it around campus.

There was a time before Trump dominated the headlines. A time before he had the nuclear codes at his Twitter-happy fingertips. In that simpler, quieter time, he was just another New York City real estate mogul with a tower and ego to match.

Back then, music was in revolt. Reagan gave the economy tax cuts and the festering suburban youth a conservative revolution to scream about. Punk fueled itself by rejecting the norm, the rich and anything they saw in-line with their dystopian view of America. For punks in New York, Trump’s gold-plated name on the New York City skyline gave them easy fodder.

The quasi-sarcastic lines “We have expelled all members of the inferior races, as well as artists, intellectuals, and other communists. God bless Donald Trump and the American dream!” vibrated off the puke-stained walls of legendary Manhattan punk club CBGB in 1986. Sung by The Connotations, it was Trump’s grand entrance into music history. A history that would chronicle, and to a degree help curate, Trump’s public image.

Trump evoked power. What the punks of Manhattan’s East Village hated about Trump, the rappers of the outer boroughs loved. They loved his money, his fame and his scrappy billionaire bravado. 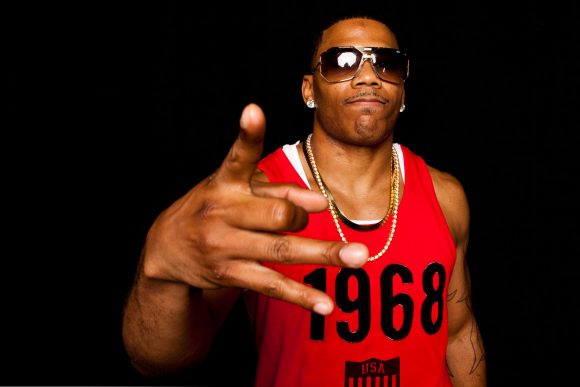 “Boy, I got money like Donald Trump.” said the Brooklyn-based Fat Boys in “LIE-Z.”

In LIE-Z, rapper Buff Love’s smile shines through his lyrics. Caught between the tail end of disco and birth of hip hop, The Fat Boys took the best of both. A meld of synthesized basslines and beatboxed breakdowns set the backdrop to half-spoken call-and-response lyrics. The song entertains a conversation between the three rappers, punctuated with a trifecta of voices over the chorus. It’s a throwback worthy of putting on a yellow bomber jacket, dark sunglasses resting at the tip of your nose, cross your arms and wiggle to.

You have know Country Grammar, you just don’t know you know it. It’s one of those song you suppressed along with the memories of sweaty-palmed middle school dances and the time when rap mixed kids choruses with the deep, raspy yelling of a crunk DJs. It’s hook is a distilled ice cream truck jingle fashioned into an twerk-ready club anthem of the early 2000s. A nostalgia-inducing beverage in one hand and surrounded by a group of friends is just about the only way to listen to this song.

“Next time you see me I’ll have money like Donald Trump,” said Lil Wayne said while featuring in “What’s Up With Dat.”

“What’s Up With Dat” sacrifices any remnants of a pleasing melodies to the crunk gods, killing harmony or tone along with it. Underneath the incoherent lyrics The synthesized instrumental sounds like it had a stuffy nose. But neither the lyrics nor musicality really matter, the song is not for dissection. Crunk music, named for the colloquially past tense conjugation of “to crank” is for blaring through a speaker system and doing things I can’t write about in this magazine.

Trump’s image of wealth and fame found its musical home in rap. While punk moved on to other anti-everything crusades, rap stuck with Trump. At least, what they saw of Trump.

After a best selling book and a healthy dose of tabloid cameos, he graduated from New York City socialite to national celebrity. As he grew his image, he gained traction as a nation-wide musical reference.

A rare few called out Trump for his outsized lifestyle in their tracks, most sticking to praising the man for his wealth and power. Before his run for presidency, little besides his ostentatious wealth gave musicians ammunition for criticism. Trump had managed to keep his hateful tendencies out of the public view. His now-widely known divisive inner swamp creature only occasionally bubble up to the surface back in his pre-Twitter days.

In a 2016 New York Times opinion piece titled, “Is Trump a Racist?” Nicholas Kristof ticks through many of the times Trump’s darker side poked through his idyllic, orange surface layer.

In 1989 Trump took out ads in four New York City daily papers calling for a group of five teens (one hispanic and four black) to be given the death penalty for their arrests in connection to the infamous Central Park gang rape. After Trump’s $85,000 calls for the so-called Central Park Five’s death, the teens were convicted on coerced confessions. Later, when DNA evidence exonerated all five, Trump doubled down on his unsubstantiated claim of their guilt.

As Kristoff put it, “in retrospect, [the Central Park Five] suffered a modern version of a lynching, and Trump played a part in whipping up the crowds.”

Further retrospect after Kristoff’s column and after Trump’s first year in office, the central park five show early rumbles of the inner Trump. Back then, his character hid behind an image. The Trump in songs is not the Trump that sees good people “on both sides” of a neo-nazi rally, the Trump that re-tweets anti-Muslim hate groups and the Trump that has become the hero of white nationalists. Hindsight is 2020, and without the ability to see the future, music kept singing Trump’s praises. 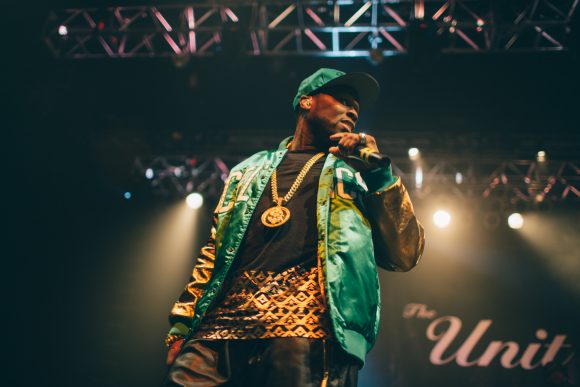 “I am just trying to get rich like Donald Trump,” rapped Ice Cube in “Three Strikes You In.”

Limber up your neck muscles before listening to Ice Cube’s “Three Strikes You In.” Its rhythmic piano beat accompanies Cube’s fire-spitting lyrics in a song predating the rapper’s “Are We There Yet” days.

Young Jeezy pumps this track full of energy. The strings in the instrumental and constant repetition of his punchlines by a chorus of background voices make this song something not to write about, but to dance to.

The song has a confusing start. A gunshot followed by the twinkling plucks of a medieval mandolin. But through the initial fog shines a 50 Cent gem. Each line ends with the melodic sway of his voice, a tonal inflection that 50 Cent has mastered. It follows a classic 50 cent rhythm, one fit to be blasted out of a tinted-window suburban.

NBC’s The Apprentice launched Trump into the prime-time living rooms of millions of Americans. His pop culture presence only amplified his song reference count. After the show’s launch in 2004, mentions of his names in songs skyrocketed, according to data journalism site FiveThirtyEight.

The Apprentice dubbed Trump an all powerful overlord, a feudal king that the show’s contestants, and by extension its viewers, bowed down to. The Apprentice made Trump more Trump than the man himself even was. His wealth, his hair and even his signature catch phrase of “you’re fired” were only figments of reality TV. (The New York Times later reported that Trump actually hates to fire people).

No song exemplifies this post-Apprentice Trump persona better than the aptly named Mac Miller single “Donald Trump.” Here Trump is not just offered a passing line or verse, but an entire song dedicated to his brand of globetrotting success.

Miller raps “I take over the world when I’m on my Donald Trump shit.” When the song hit the Billboard top 100, Trump was so flattered he congratulated Miller by asking for royalties on the use of his name. He later threatened to sue.

Miller’s hit offers a distilled essence of the praise heaped on the man in many of the over 260 songs that reference him. The song is not just a dedication to Trump, but instead an assertion that Miller himself will be Trump one day. That’s the thing, these songs don’t actually love Trump the Man, they love Trump the Idea. An idea carefully sculpted through TV, books and newspapers. An idea perpetuated through songs like Miller’s. An idea that would be shattered a few years after Miller released his single.

Ask those who saw Trump off-camera at The Apprentice and the idea doesn’t match the reality. NPR’s Embedded podcast did just that, reporting on the real Trump before the White House. In interviews with those that worked with Trump at The Apprentice, they uncovering a man that may have said much worse than what is on the access hollywood tape or in his stump speeches.

The off-camera, pussy-grabbing Trump arrived in 2015. When he called Mexicans rapists. When he tweeted an anti-semitic photo of Hillary Clinton with a quasi-star of david. When the candidate for the presidency embodied the nation’s collective xenophobic, drunk uncle (Trump doesn’t drink, but you get the point.) Trump’s descent down the escalator in Trump hotel to launch his campaign for the presidency dragged our national discourses down with it, and music was listening.

After 2015, the number of negative songs about Trump increased more than tenfold from the year before, according to FiveThirtyEight. Like many, Miller’s praise of Trump as a businessman did not correlate to support for his presidency. “Just please don’t elect this mother fucking man,” tweeted Miller in December of 2015.

In 2016 YG put out the most cut-to-the-chase single of the year with “Fuck Donald Trump.” One need not read further past the title to understand the song’s message. The sentiment of YG’s song is not unique to him or to rap. Trump ignited a musical and cultural backlash, one of ubiquitous protests (with their own playlists) and artists jocking to get the best jab at the president. 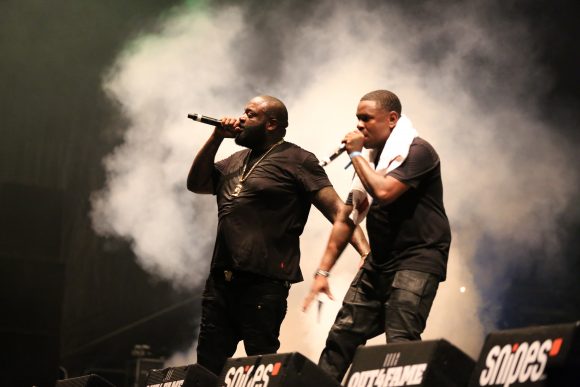 “Assasinate Trump like I am Zimmerman,” rapped Rick Ross in “Free Enterprise.”

Ross’s rich voice bounds off the piano and bass instrumental in “Free Enterprise.” His instrumental crosses an emotional indie movie scene and a boxer’s grand entrance. The track makes an emotional appeal to social justice amidst the mass incarceration of black men in the U.S. making it a fitting place for a controversial call for assassinating the man who once retweeted a racist statistics of false black crime rates.

“Come through and knock Donald Trump out his toupee” rapped The Game in “El Chapo.”

You wouldn’t be the only one to miss Game’s reference to Trump in “El Chapo.” Swimming in this song’s heart thumping bassline, the president’s name for once gets drowned out. Producers Skrillex and Bangladesh crafted a masterpiece soundtrack to debauchery. Turn the bass up loud enough and certainly it will knock Trump out his (alleged) toupee.

Digest it? Hm. The machine-gunned lyrics rattle off a list of indigestible social injustices (which include the occasional bad album review). One of them being if Trump gets elected, “they can’t digest it.” I hope Tiara has Tums. The strange lyrics float on top of a beat of glassy synths and distant reverberating drums.

Trump’s bubble had popped. His race-baiting venom had dripped in to the public. Trump’s name had returned to the way it was used by bands back in the ‘80s. Not that those high-school punks foresaw the future, or that rap didn’t, but it seems the loop has closed on Trump.

Now that he is the most powerful man in the world there is not much need for him to curate his image of power. He has reality of it, not just reality tv show power. The songs that praised Trump did not create the man who would become the 45th president. But their content certainly presents a lens through which his power could be heard.

After the White House, where else is there to go? Trump has reached both the pinnacle and probable end of his career, one that music certainly had something to say about.