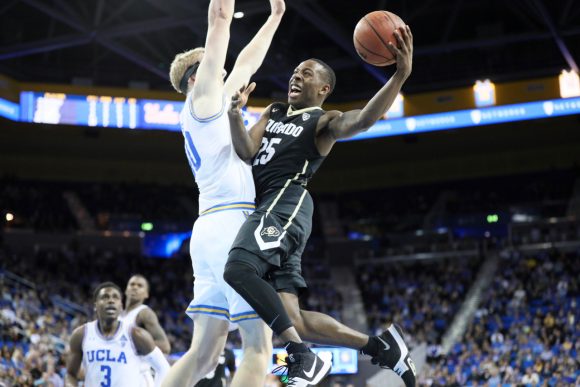 The Colorado Buffaloes played the second of a three-game homestand against the California Golden Bears Wednesday night at the Coors Events Center.

Colorado won by the score of 68-64, but the Buffs didn’t play up to expectations.

The Bears came into Wednesday night’s game with a 2-9 record in the Pac-12, the second to last team in the standings.

“Shootaround today was pretty dead,” said freshman guard McKinley Wright IV. “We can’t take teams like this light. We know that Cal’s at the bottom of our league. I’ll be honest, we took them light.”

Junior guard Namon Wright sat out once again with his ongoing illness. Freshman Lazar Nikolic started instead, filling in for the Missouri transfer.

It was a sluggish start for the Buffs. They had eight turnovers in the course of 12 minutes with patches of lackluster scoring.

Colorado at one point in the half hadn’t scored for at least two minutes.

The poor play continued for the Buffs as head coach Tad Boyle started to look increasingly frustrated after every mistake his team made.

By the five-minute mark in the first half, Colorado had given up 10 turnovers and California capitalized. The Bears also managed 14 points in the paint compared to Colorado’s four at that point in the game.

“It starts with me,” Wright IV said of the turnovers. “I’ve got to do a better job of taking care of the ball. My energy from the start has to be better.”

The Buffs struggled from the floor as well, shooting only 35 percent through the four-minute mark in the first half.

With the exception of freshman forward Dallas Walton’s first basket, the Buffs trailed the Bears for a large majority of the first half. They were able to salvage the substandard half by going on a 9-2 run that was engineered by Wright IV and sophomore guard Deleon Brown. The half ended with the Buffs and Bears tied at 28.

“Thank god we won,” Boyle said. “I’ve never in my time here […] been this disappointed after a win in terms of our performance…we won for one reason, and that’s No. 25 (Wright IV) for the Buffs.”

While the Buffs ended up winning narrowly, the second half was just as frustrating as the first half.

The Buffs continued to turn the ball over as they ended up with 19 total turnovers on the night. They also had trouble containing Cal senior forward Marcus Lee who ended up with 10 points and a team-high 12 rebounds.

Wright IV kept the Buffs in the lead for during the second half with 11 points, four rebounds and three assists in the half alone. He played a crucial part in the later stages of the half as he was able to make plenty of free throws when the game was tight.

“There are point guards who are better shooters and passers, but the intangibles that he brings to this team cannot have a value put on it,” Boyle said. “He willed us to a win tonight.”

What kept Cal in with a chance late in the game was their ability to make threes and catch the Buffs off guard after they hit their free throws in crunch time.

“They had three three-point shots down the stretch when we’re switching ball screens,” Boyle said. “They shouldn’t be getting threes, and if they do they should be contested.”

But luckily for Boyle and his players, they survived with a four-point victory at home against a team who’s now 2-10 in conference play.

The Buffs were outrebounded 36-32 in the win.

Wright IV ended up leading the Buffs in the scoring department with 17 points on 3-of-7 shooting and led the team in assists with five. Walton led Colorado in rebounding with seven.

The Buffs will close out their three-game homestand on Sunday afternoon against the Stanford Cardinal, who are arguably one of the more underrated teams in the conference with a gargantuan down low in 6-foot-8 junior forward Reid Travis.

“Travis will have 18 rebounds by himself on Sunday if we don’t figure things out. He is a beast. He’s playing as well as anybody in the country right now . . . if we play Sunday the way we played tonight, we’ve got no chance.”

The Buffs will take on the Stanford Cardinal at the Coors Event Center Sunday night. Game time is scheduled for 2 p.m. MST and will be aired on Pac-12 Network.