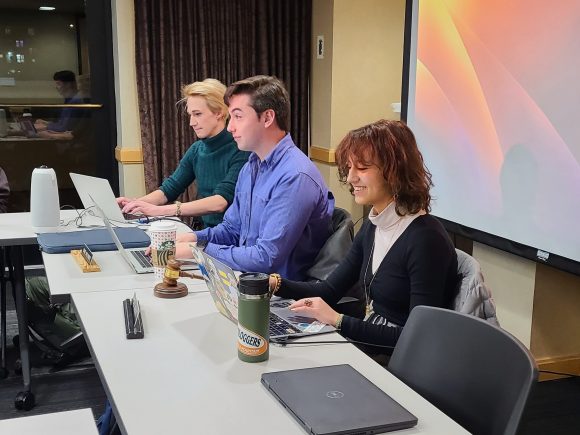 Webster ran for representative-at-large under the Unity ticket in the spring 2022 CUSG elections. During the 97th session, she sponsored notable legislation like a resolution that called on the Board of Regents to ban the concealed carry of firearms on campus, 97 LCR 05, and a bill to create a program giving free contraceptives to community members, 97 LCB 04.

Webster is from Centennial, Colorado. In the past, she worked with the National Alliance on Mental Illness in Boulder County, an activism and mental health support organization. She is a sophomore with a major in political science and a minor in Spanish.

The incoming council president spoke with the CU Independent about her goals for the semester. Questions and answers have been edited for clarity and length.

CUI: What are you hoping to accomplish this semester?

Webster: My main priority this semester is transparency for the students. Something that I’m really trying to push for and work on is making sure that our website has a legislation tracker and updates with agendas weekly. Right now, students don’t have any way to access what we’re doing [to be able] to read the actual bills. While it’s all on our social media, they only really see the title and nothing else. I’m making it a priority to make sure that happens, that the students can actually see exactly what we’re working on rather than just having a rough idea, and hopefully, that will encourage people to come to public open hearing and to be a little bit more involved.

On that same note, I want to better advertise emails and office hours of senators and representatives for people to get in contact with us.

Something else that I’m hoping to accomplish is to have CUSG leaders be involved in local and state politics. That will come up right when the state legislature really gets in the swing of things with bills, and I’ll be working with our legislative affairs director [Chase Cromwell] to encourage senators and representatives to go down and testify on behalf of CU students. We can accomplish that even better if people reach out to us, let us know what they’re seeing just in Boulder in general, and then at a state level as well, so we can best advocate for them there.

CUI: What legislation are you looking forward to this semester?

Webster: Last semester, there was a push to create a free emergency contraceptive program. I am looking forward to working with the health and safety chair of the executive branch, Nimisha Mallela, to try and make sure that we can get that through the council.

The primary focus, though, this session, as much as I would like to write as many bills and resolutions, is budget season. That’ll be happening in February. A priority of CUSG during that is to have equitable pay in CUSG. Right now, our judicial branch is severely underpaid compared to the rest of CUSG proper.

With the free emergency contraceptive program, we don’t need a huge boost to the budget in that way, but it’s just about transferring specific funds to get [the program] funded. We are very tight on funds this year.

I’m gonna make it a priority to attend every single hearing that I can to hear from every single cost center and joint board to learn more about their priorities and be able to advocate for them and also for the students that they serve.

CUI: What’s the biggest challenge you’re looking at in this upcoming session?

Webster: I think the biggest challenge that I have moving forward is weathering the council’s opinions and the executives’ and [the department of] student affairs’ opinions on the chancellor’s agreement and on the constitutional amendments.

A lot of times, when these meetings are very long, it’s easy to become a little bit disillusioned. But what I’m hoping to do is to keep legislators engaged, keep them thoughtful and keep them asking good questions even as we deal with a lot.

And you know, there’s gonna be a lot of opinions thrown around in this room, especially not just from legislators, but from the executives and from student affairs. My biggest challenge is to try and make sure that everybody gets an equal voice while also maintaining efficiency and making sure that we’re getting everything done that we need to.

CUI: If there were no limits to your power, what would you choose to change on campus?

Webster: I’ll give a practical and a fun answer. Practical, though I don’t have any power over this, just improving Wi-Fi. That’s my personal biggest annoyance on campus.

And then fun wise, this isn’t realistic at all, do you know those moving walkways at airports? What if we installed that on campus? More of a practical thing, I wish there was more free coffee places in the mornings. That would be nice: coffee on every corner.