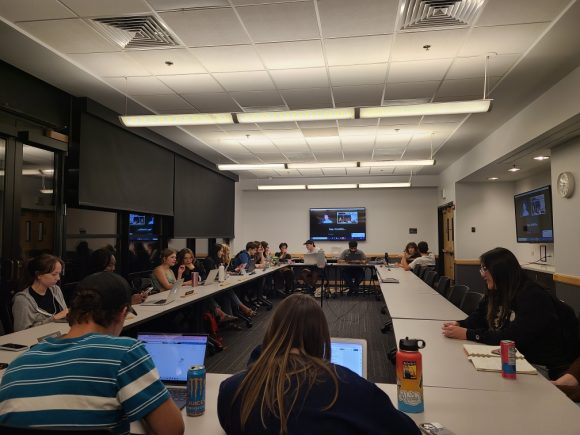 On Thursday night, Oct. 6, the University of Colorado Boulder Student Government’s (CUSG) Legislative Council unanimously approved a resolution that calls on the Board of Regents to reinstate a ban on the concealed carry of firearms on campus.

“This [proposed ban] is a change that could save people’s lives,” said Tri-Executive Rachel Hill, who authored the resolution, at the meeting.

However, in 2003, Colorado General Assembly passed the Concealed Carry Act (CCA), which allowed anyone over the age of 21 with a permit to carry a concealed handgun or weapon.

A group calling themselves the “Students for Concealed Carry on Campus” sued the University of Colorado after the act was passed, saying the board’s policy contradicted the newly passed state law.

“In sum, we hold that the CCA divested the Board of Regents of its authority to regulate concealed handgun possession on campus,” wrote Justice Allison Eid in the majority opinion.

The Board of Regents changed Policy 14-I in Sept. 2012 after the ruling, allowing concealed carry on campus for permit holders. This change excluded residence halls and ticketed gatherings like athletic events or concerts.

The state supreme court’s decision and the change in university policy make Colorado one of just 10 states that permit concealed carry for students on campus.

However, in June 2021, Colorado General Assembly passed a law altering the power smaller bodies have over gun control laws, SB21-256. The law says that state and local governments have the power to regulate firearms, effectively returning the power to the Board of Regents to ban concealed carry.

“This [recently passed act] is a big deal. This is where we have the power to actually advocate for change at a higher level,” Hill said at the meeting.

At Thursday’s Legislative Council meeting, Hill presented resolution 97 LCR 05, which says the student government calls on the Board of Regents to reinstate a CU system-wide ban on concealed carry. Most bills, if they require amending, will go to a second reading before a final vote. This resolution passed unanimously upon first reading.

Hill said that the support from student legislators felt “amazing.”

The resolution will be sent to the Board of Regents to review at the Special Board meeting on Oct.12. From there, it will be assigned to a committee to review and vote on in December. If the committee passes it, the full board will vote on it sometime between January and March.

Until then, Hill said she plans to get students involved to increase the pressure on the Board of Regents to reinstate the ban.

“This is where the fun starts,” she said. “Because now we’re really gonna start getting students involved.”