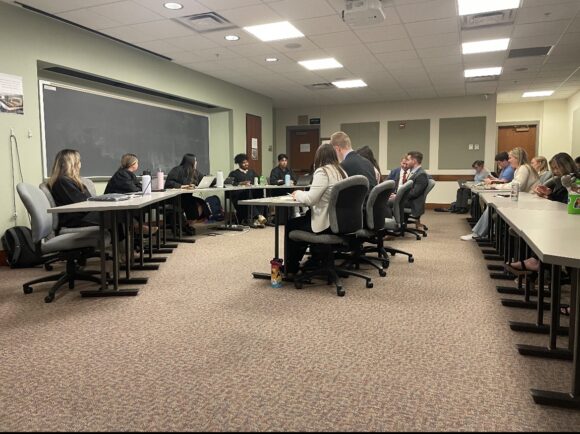 The Unity and Inspire tickets have received their verdicts in each of their separate appeal hearings, with decisions announced late Friday night upholding Inspire’s disqualification, but overturning the Unity ticket’s ruling, making them the confirmed winners of the Spring 2022 CUSG election.

The decisions come after hearings held on Thursday night, with Unity and Inspire’s council frequently clashing over whether the opposing team should have their cases overturned.

In the first case, where the court originally found the Inspire ticket guilty of bribery and violating section 702 of the Election Code, the justices ruled in a 6-1 split decision, with Justice Wong dissenting, to uphold the decision of the Election Infraction Tribunal. In their majority opinion, the Court stated that the numerous claims brought and presented by the Inspire ticket “held no substance” and were therefore unpersuasive on their appeal.

In their arguments, Inspire brought forth a variety of appeals as to why their trial was unfair, specifically that the format of the trial was unfair; the Election Commissioner’s testimony and Amicus brief should be stricken from the record; and that the evidence presented at the Tribunals was not sufficient in proving bribery occurred. In each of these, the court ruled that the claims were not appealable, weren’t considered in the ruling, and that the Appeals Hearing is not an opportunity to argue their claims due to dissatisfaction, respectively.

“It is the opinion of the Court that the Inspire ticket failed to prove their innocence on the accusation of bribery and agrees with the opinion that bribery was used to influence votes as concluded by the Infraction Tribunal’s opinion,” the majority opinion said.

In the dissenting opinion, Associate Justice Wong argued the Tribunals’ decision should be overturned, saying letting the tribunal’s initial decision stand “sets a precedent for a broad and unrealistic definition,” and the Tribunals judgment was made, “based on assumptions without evidence on the record to support the decision.”

With this ruling, the entirety of the Inspire ticket remains disqualified from the election and all votes for the ticket have been invalidated.

“The members of the Inspire ticket are disappointed with the ruling of the Appellate Court concerning the Spring 2022 CUSG elections,” the Inspire ticket said in a statement to the CU Independent. “The ruling disregards the votes of over two-thousand students. Although there is nothing we can do to change the decision of the Tribunal, the Inspire campaign’s mission will never change. Inspire is dedicated to connecting every corner on campus, correcting problems at CU, and working towards a collaborative community.”

In the second case, which regarded Unity allegedly committing perjury by “instructing” witnesses in their case against Inspire, the justices heard appeals as to whether the Unity ticket was denied inherent due process rights by being charged and disqualified without a proper tribunal. In a 6-1 split-decision, with Deputy Chief Justice Gilbert dissenting, the Appellate Court ruled to overturn and strike down the decision made by the Election Infraction Tribunal.

In their majority opinion, the justices acknowledged that the Tribunal has a responsibility to protect the judicial process, and had they not taken swift actions, “they would have deeply disrupted the judicial process and set a very dangerous precedent that a Tribunal can ignore confessions of perjury or other actions that would significantly determine the outcome of a case or the election,” the court said.

With that in the mind, the Court also found that due process is, “almost completely absent in this case, which the Appellate Court does not take lightly,” they said. “The remedy of an appeal must be given in order to ensure the rights of the students that are protected under the United States Constitution.”

In the dissenting opinion, Justice Gilbert, who received the email from the witnesses and was one of three justices in the Election Tribunal who voted to disqualify Unity in the original case, notes that due process is not explicitly mentioned in the CUSG Constitution, Election Code, or bylaws of any of the three branches within CUSG, and therefore it is inappropriate to “take textual liberties” and overturn the entire case against the Unity ticket.

“Wherein lies the institutional mechanism to hold all tickets and their witnesses accountable for truth-telling during the Infraction Tribunal process, if not in the Tribunal’s final opinion and charges?” said Gilbert. “Though unfortunate and personally upsetting, it was in no way in violation of the Election Code to charge the Unity ticket with a charge that was not tried and disputed in the Infraction Tribunal’s initial trial.”

With this ruling, Unity is therefore reinstated in the Spring 2022 CUSG election and is the new Tri-Executives of CUSG.

“These decisions have ensured that justice will be served when infractions have been made,” the Unity Ticket said in a statement. “We on behalf of the Unity Ticket are more than excited to serve this campus and uphold the voices of all students.”