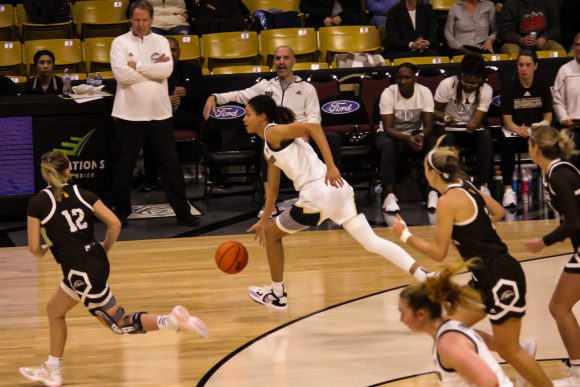 Fifth year guard Tayanna Jones runs with the ball during the fourth quarter at the game against Western Michigan University on Nov. 30, 2022 (Lily Wright/CU Independent)

After a huge win against the Western Michigan Broncos on Nov. 30, the Colorado women’s basketball team continued their stellar regular season play, beating the Boise State Broncos 71-48 on Sunday, Dec. 4.

In the first half, CU played very well, scoring 44 points compared to Boise’s 21 points. In the first quarter, the Buffs went four for seven on three-pointers, capitalizing on outside opportunities by penetrating the key and kicking the ball back out. Senior guard Jaylyn Sherrod brought in multiple rebounds on defense and pushed the ball up the court, setting up counter-attacks on the Broncos’ defense. By the end of the quarter, Boise was trailing Colorado by seven points.

During the second quarter, the Buffaloes remained aggressive on offense, while also locking down hard on defense. When Boise players attempted to penetrate the key, they were met head-on by guard Tayanna Jones and center Quay Miller, who both forced multiple turnovers. Colorado held Boise State to just one field goal and one three-pointer for the entire quarter.

“I think our team, especially our veterans, take great pride in defending,” said head coach JR Payne. “They know that defense helped us to be successful last year, and we feel like we’re built on the defensive end. We also recognize that defense can create offense for us, so the players who like to defend want to get out and transition. I think the two kind of go hand-in-hand.”

Meanwhile, the Buffs continued their hefty scoring on offense. Colorado scored another 22 points in the second quarter, increasing their lead heading into halftime.

However, in the third quarter, CU began to lose some of its momentum. The Buffs couldn’t finish several of their scoring chances and allowed a few open shots by the Broncos. Despite being outscored by their opponents, CU remained composed, relying on the significant lead they had built up during the first half. Finally, the momentum began to swing back toward Colorado at the end of the third quarter, giving them a new surge of energy to finish the game.

Although they were still up by double-digits, CU wanted to end the game strongly and secure their win during the fourth quarter. On defense, the Buffs worked harder to contest all of the Broncos’ shots and get defensive rebounds.

In response, Boise State kept up the pressure on the Buffs in the fourth quarter, making guards Sherrod and Tamiya Sadler work hard to get open shots outside the arc. Then sophomore center Aaronette Vonleh managed to put up some much-needed baskets on the Bronco’s side, despite being double-teamed at times, scoring six for six inside the three-point line.

Eventually, the match concluded 71-48, giving the Buffs their third win on the road.

Following this blow-out win, Payne reflected on the success of the game, as well as keeping her players focused on the road ahead as they prepare for tougher conference competitions.

“We were really trying to prioritize our pace offensively and our discipline on both sides of the floor,” Payne said. “I think we did pretty good at both of those things. We’re getting contributions from different people on different nights. If we can rely on that, it’s really going to help us throughout the season.”

Colorado will face Southern Utah at home on this afternoon, Dec. 7, before heading back out on the road to compete against the University of Utah on Dec. 14.