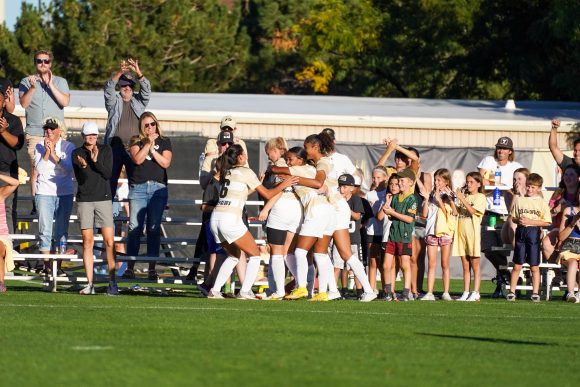 After suffering their first loss at home, the University of Colorado women’s soccer hit the road this week and traveled west for two games in Washington. The loss at home ignited some strong emotions from players and coaches, but the team planned on keeping their heads high and focusing solely on the games coming up. However, they returned home winless, after a draw with Washington State on Thursday, Sept. 29, followed by a loss to the University of Washington on Sunday, Oct. 2.

The first game against the Washington State Cougars gave the Buffs their third tie, ending in a 1-1 draw. Senior forward Civana Kuhlmann scored the Buff’s first and only goal right off the bat, 10 minutes into the game. Kuhlmann settled a high pass in the Cougar’s goal box, where she fielded pressure from a central defender, turned to face the goal and landed a shot in the net over the heads of three Washington players. Last week, Kuhlmann also scored the game-changing second goal against the Arizona State University Sun Devils to tie the game 2-2, before the referee controversially ruled an ASU goal in the 89th minute.

When asked about the Buff’s impressive comeback last week, Kuhlmann responded, “We have a lot of fight in us, and you can’t ever count us out of the game, even if it’s in the second half and we’re two goals down. It gives us confidence going forward.”

The team exemplified that confidence during the match against Washington State, when the Buffs refused to give in to the perpetual pressure from the Cougar’s offense. The Buffs had five shots in the first half, while the Cougars had 17. The Buffs had even fewer shots in the second half, only three compared to the Cougar’s twenty-two. This was the most shots against the Buffs in a single match this season, yet goalkeeper Dani Hansen consistently made critical saves and sent the ball out of her team’s half of the field.

Over an hour into the game, one Cougar forward finally scored a goal against the Buffs, after colliding with Hansen. Despite the blatant contact with the Buff’s keeper, no foul was called, which seemed to frustrate the team’s defense. The game eventually ended with a 1-1 draw.

Three days later, the Buffs went on to face the University of Washington Huskies on Sunday, Oct. 2. Overall, the scoring in this match stayed more even than the previous game against the Cougars. The Buffs had eight shots in the first half, while the Huskies had 11. In the second half, the Buffs shot eight again, and the Huskies shot 10. The Huskies got their first goal quickly into the match, scoring in the ninth minute. The Huskies’ second goal came right before the end of the first half, sending the Buffs into halftime down by two. Although the Buffs have come back from a 0-2 deficit in the past, this time they did not. The Huskies scored another goal in the 68th minute, reducing the Buff’s chances of catching up.

Despite the large scoring gap, fifth-year forward Kayleigh Webb remained persistent in her efforts to penetrate the Huskies’ defensive line. In the 80th minute, Webb, assisted by forwards Kuhlmann and Emerson Layne, scored the Buffs’ single goal of the match. Two minutes later, the Huskies scored the fourth goal, and the game ended 4-1.

The Buffs will return home this week looking for a bounce-back weekend against Oregon State on Thursday, Oct. 6, followed by the University of Oregon on Sunday, Oct. 9.