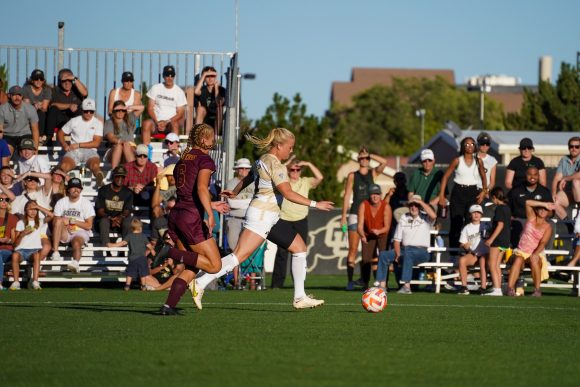 The Pac-12 home opener for Colorado Women’s Soccer was bound to be a distinctive season game. Still, few anticipated a match like the one on Sept. 23 against Arizona State University. After defeating Denver University at Prentup Field the weekend before, the Buffs entered the ASU game with an undefeated record at home. Previous matches against schools like Michigan State and Michigan had given the Buffs a taste of the competitiveness that awaited them the rest of their season.

The game against the Sun Devils was somewhat even for the first 30 minutes, with equal pressure from both teams’ offenses and strong defending from the back line. The physicality was elevated, as seen through frequent free kicks and passionate commentary from the CU fans. In the 29th minute, an ASU forward capitalized on one of these free kicks to score the match’s first goal, leaving Colorado behind for the first time at a home game.

“We came out too slow,” said head coach Danny Sanchez, reflecting on the first half. “We didn’t play with any urgency.”

Although the level at play was not up to par with CU’s high expectations, the slim 1-0 lead left plenty of room for the Buffs to return in the second half. Forwards Juliauna Hayward and Shyra James were often double-teamed by ASU center backs, and midfielder Jenny Beyer had to fight off sideline pressure constantly. The Sun Devils had a total of 13 shots in the second half compared to CU’s three shots, and one of ASU’s shots converted into a goal in the 58th minute, growing the lead to 2-0.

As more time passed, the likelihood of a CU win declined, and fatigue started setting in on both teams. Around the one-hour mark, Sanchez made multiple substitutions, giving his starters a much-needed break from the intensity of the match. Ten minutes later, some of the subs returned to the field, which became the game’s turning point. 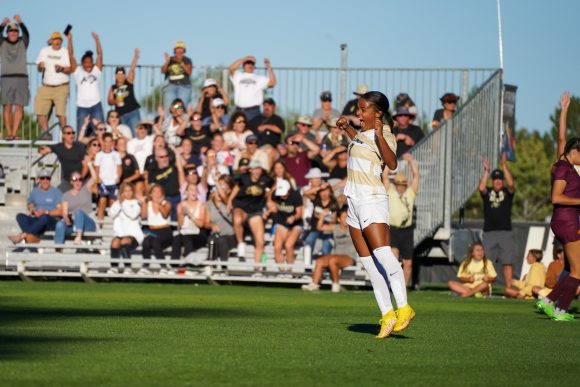 After showing the Arizona defense relentless pressure, despite the score deficit, Hayward dribbled through a line of ASU players and took a shot outside the box. The shot hit the left post and curled in, giving CU their first goal in the 70th minute. There was a new surge of energy for Colorado as fans rose from their seats on the sidelines with regained confidence. Just one minute later, defender Phoenix Miranda passed a shot over the heads of ASU defenders, landing perfectly at the feet of forward Civana Kuhlmann. With a defender right on her tail, Kuhlmann placed the ball in the right corner of the ASU goal, tying the match in the 71st minute.

From then on, the competitiveness was at an all-time high, with elevated aggression from ASU players and newfound determination from the Buffs. In the last minute of the game, possession transferred to ASU in the midfield with only seconds left, and one Sun Devil forward capitalized on her last opportunity to score, sending the ball to the top right of CU’s goal. Hansen batted the ball into the side post, preventing it from crossing the goal line, but the head referee ruled the shot as a goal in the 89th minute, with just three seconds left.

Immediately turmoil unfolded on both sidelines, with Buffs fans in utter disbelief of the decision after watching the replay on the big screen. The Colorado coaching staff began to pull footage and approach the sideline referees, shouting in anger and frustration.

“It was chaos,” said CU sophomore Claire Grossman, watching from the fan section when ASU scored their final goal. “Everyone was yelling at the refs and were very frustrated. Most fans seemed to disagree with the final call, so they were pretty upset.”

On the players’ sideline, Sanchez was fighting relentlessly for the refs to review the video footage of the goal, which he believed made it evident that the ball did not cross the goal line. Some Buffs players waited in suspense, hoping for an overturned decision. There was shouting and tears, but the referee ruled that he could not review video footage and that the goal would stand, ending the game 3-2.

“It is my understanding that the Pac-12 does have video review,” said Sanchez after the match. When asked about the refs’ explanations, Sanchez responded, “they didn’t review the video review [requirements] before the game to make sure there were enough cameras.”

Because this match was a part of the conference games, its result was significant, making the loss even more painful for Colorado, especially since it was perceived as unjust.

“It’s just the worst kind of situation,” said Kuhlmann after the game. “We made a few mistakes to lead up to the [third] goal, but for it to be something out of our control to call the game is a bit defeating at the moment…but these things even out so one time it’ll go our way.”

Colorado travels to Washington this week, where they will play Washington State, followed by the University of Washington and returning to Pretnup on Oct. 6 to face Oregon State. 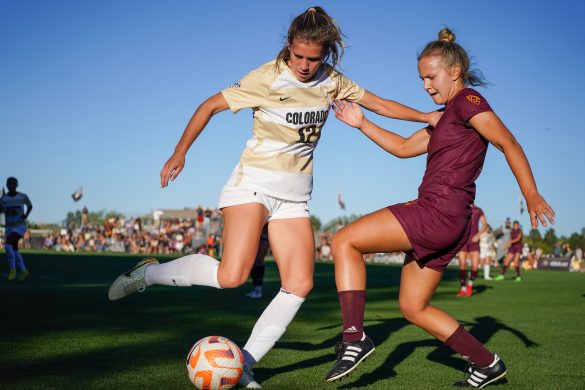 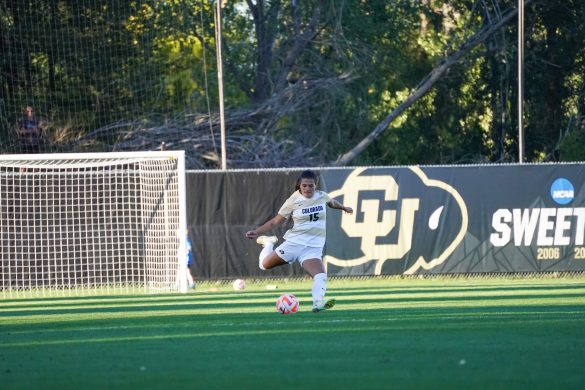 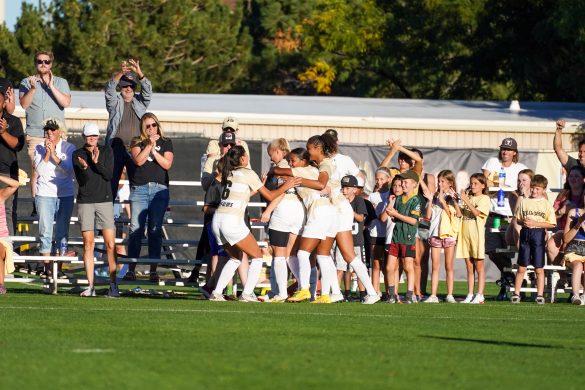 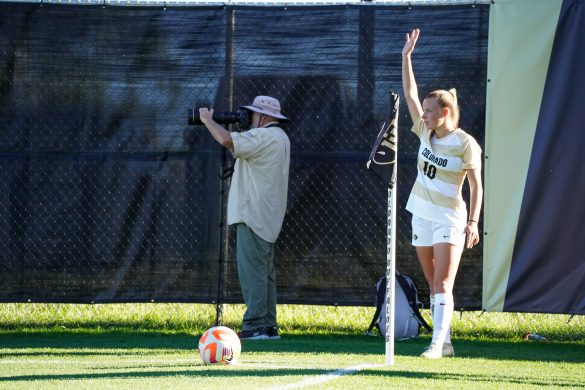 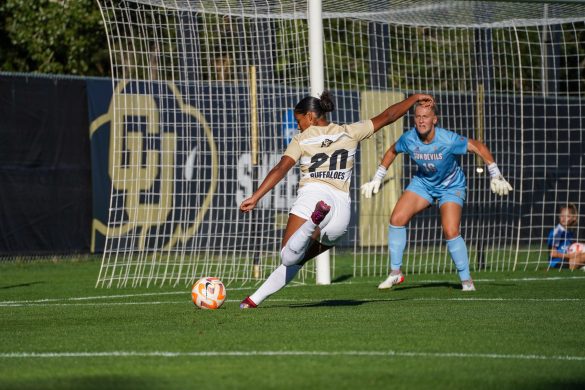 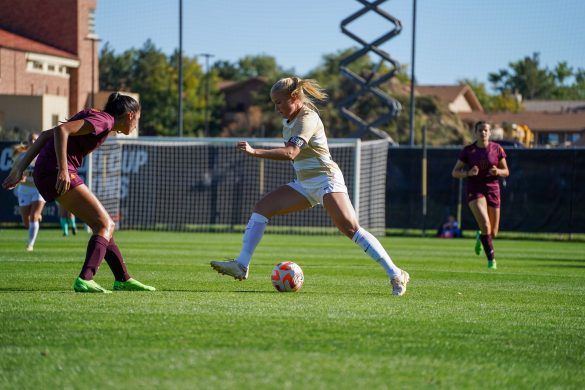 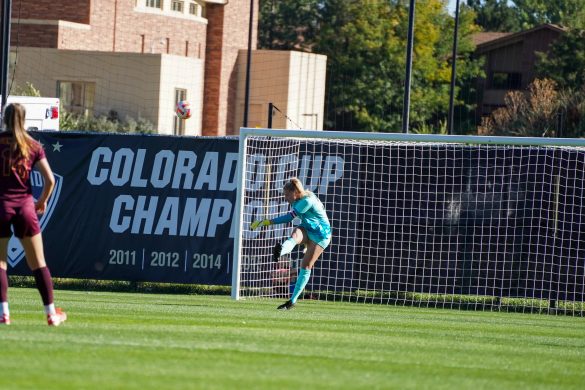 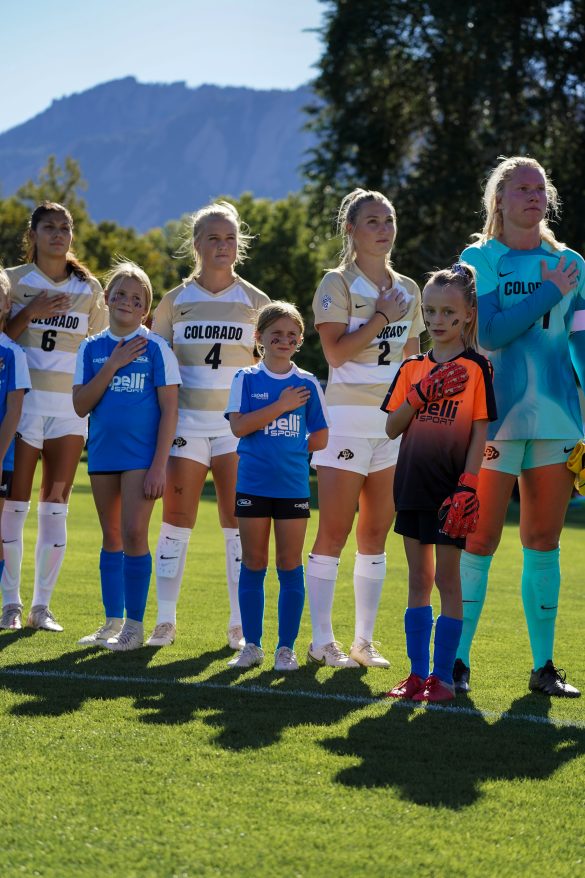 The Buffs stand with Colorado youth soccer players for the National Anthem during the game against Arizona State University on Friday, Sept. 23, 2022 at Prentup Field. (Rachel Glazer/CU Independent) 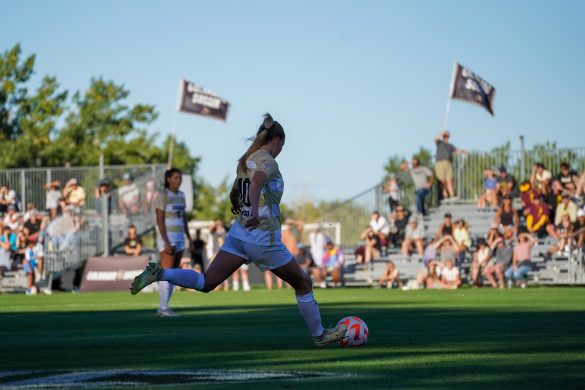 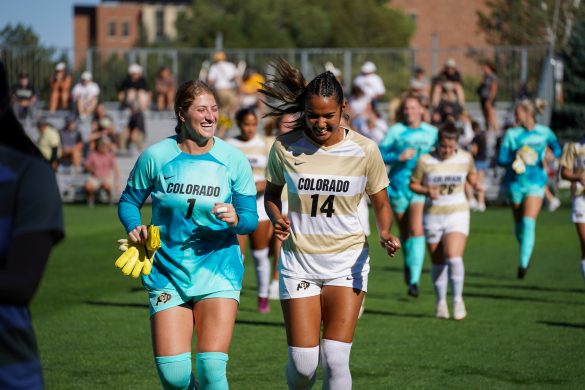 Sophomore goalkeeper Bella Grust and sophomore defender Phoenix Miranda run onto the field together before the game against ASU on Friday, Sept. 23, 2022 (Rachel Glazer/CU Independent)