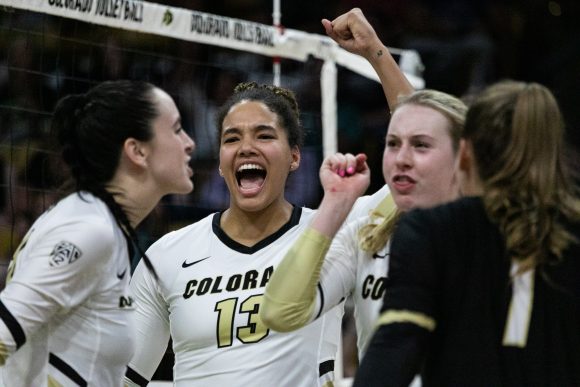 The stage was set on Friday night for the University of Colorado women’s volleyball team to avenge their previous defeat against their bitter rivals, Colorado State. Welcomed by an enthusiastic crowd of 3,695, the third largest crowd in CU volleyball history, CU looked to reverse the 3-1 loss in Fort Collins just a few days before and win the Golden Spike trophy before the start of conference play. 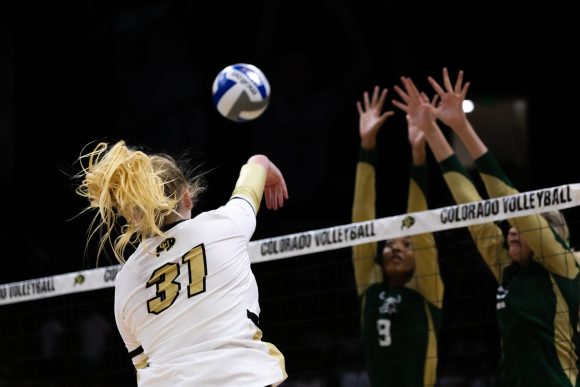 Senior outside hitter Jill Schneggenburger hits the ball during the game against CSU at the CU Events Center on Friday, Sept. 16, 2022. (Io Hartman/CU Independent)

The game got off to the worst start possible for the Buffaloes. CU would drop the first two sets, digging themselves into a hole early. CU’s struggles came to a head in the second set after an incredible nine-point run by the Rams. The run gave CSU a massive 12-3 lead halfway through the set.

CU’s team developed a pattern throughout the match; players would come back from a timeout looking more organized, but the pressure of the game would cause mistakes, leading the team to become unorganized. For Colorado State, setter Ciera Pritchard and defense specialist Kate Yoshimoto ran circles around the Buffaloes, and the second set was nothing short of a demolition job, 25-10 in favor of Colorado State. 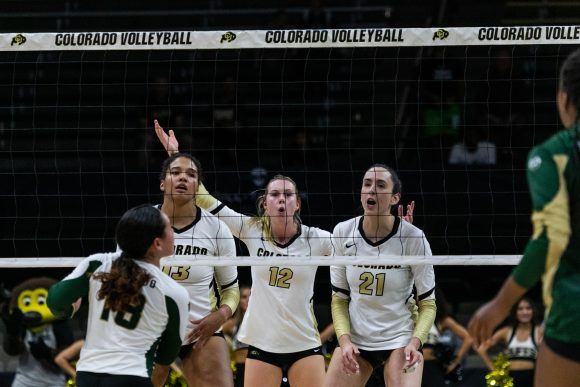 Meegan Hart and other teammates exclaim after the referees made a call that they didn’t like during the game against CSU on Friday, Sept. 16, 2022. (Io Hartman/CU Independent)

“[It was a] strange match. I don’t think I have seen us play that poorly very often. We’ve often had streaks here and there, but the first two sets were pretty rough,” said head coach Jesse Mahoney, who got his 100th win as the Buffs’ head coach. 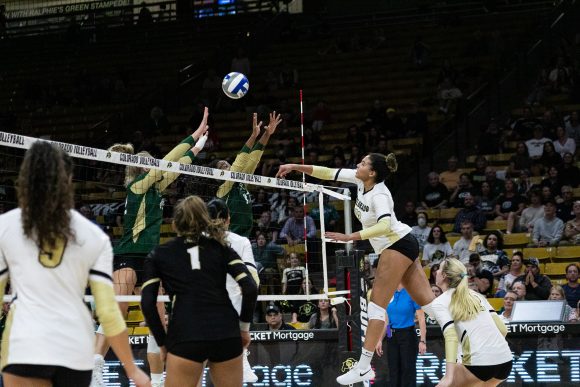 Things were looking bleak for the Buffaloes, but some players stood out with solid games even as CU struggled. Middle blocker Meegan Hart and junior outside hitter Maya Tabron had good hit percentages throughout the match, and their performances lifted the rest of the team into an incredible reverse sweep. By the end of the game, Tabron had completed 19 kills, and Hart had a hitting percentage of .654, with 17 kills and 0 errors, as well as 9 blocks, the most of any player on the team. 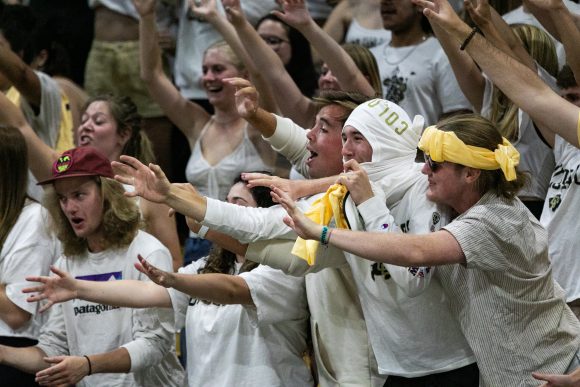 Students in CU’s student section at the CU Events Center reach for free t-shirts during the game against CSU on Friday, Sept. 16, 2022. (Io Hartman/CU Independent)

CU could no longer afford to lose being down two sets. Attacking errors plagued CU during the first two sets and were creeping in again. Both teams traded points, and halfway through this crucial set, the score equaled 12-12. The game tensed up. With the crowd exploding with each point, CU finally won their first set, 25-20.

The game remained tight, but the Buffs pulled ahead with one of the better rallies of the match, making it 6-3 in the fourth set. Tabron with the kill, shortly after a monster block from Hart made it 8-4, summing up CU’s game on the night. CU fell behind again, and with every point bringing the match closer to an end, Colorado needed a run to make the game one set longer, and it eventually came. With Tabron’s powerful serves, the Buffaloes went on an impressive 7-point scoring run.

CU was on the edge of evening up the match, the score 23-18. One of the players who best illustrates the team’s improved performance was senior blocker Sterling Parker, and she killed off the fourth set with an impressive block. 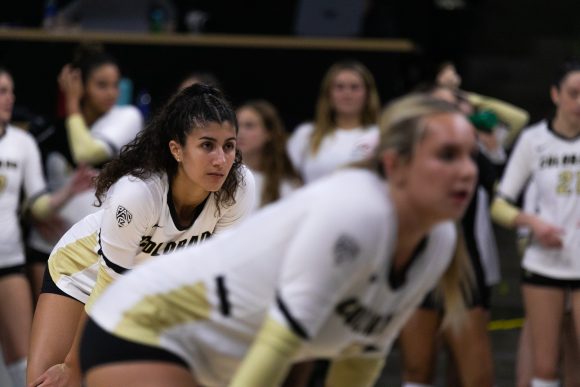 Junior outside hitter Maya Tabron waits for CSU’s volleyball team to serve the ball during the game at the CU Events Center on Friday, Sept. 16, 2022. (Io Hartman/CU Independent)

“Just seeing how well our school supported us too, how many fans we got,” said Hart. “That student section was more than I’ve seen for some basketball games. That is always a big feat.”

Suddenly, the script was flipped: the Rams were battling their nerves and making mistakes, and CU’s morale was through the roof. The atmosphere was electric. CU went on yet another scoring run, now leading 8-4, forcing the Rams to regroup. Colorado kept pushing, now leading 10-7, putting the Buffaloes 5 points away from completing the comeback. A block from junior middle blocker Alexi Kuehl put the finishing touches on a dramatic comeback. CU won the fifth and decisive set 15-8. 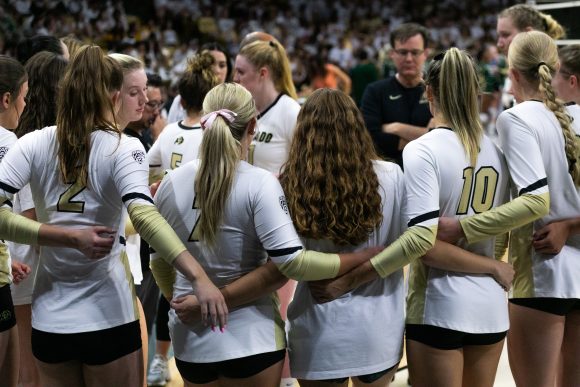 The University of Colorado Boulder’s women’s volleyball team meets during a timeout at the game against CSU at the CU Events Center on Friday, Sept. 16, 2022. (Io Hartman/CU Independent)

Tabron and the Colorado Buffaloes will be back in action on Thursday, Sept. 22, in Salt Lake City against the Utah Utes as they open up Pac-12 play. 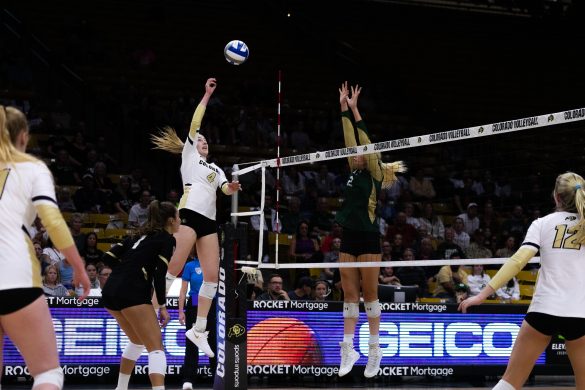 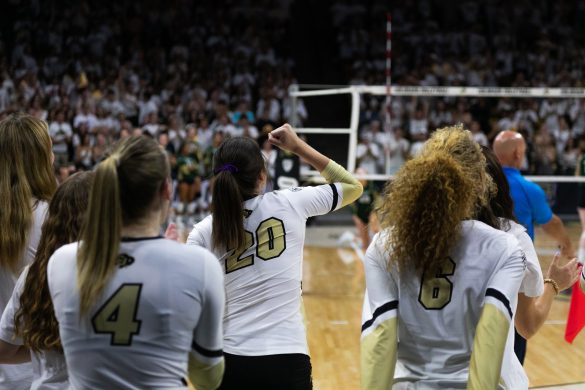 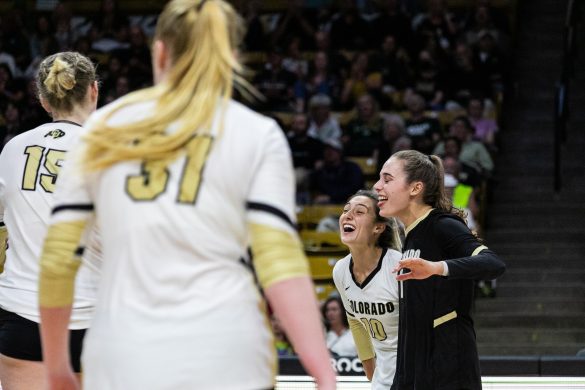 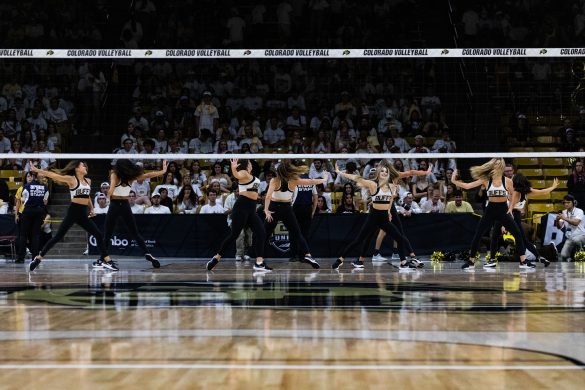 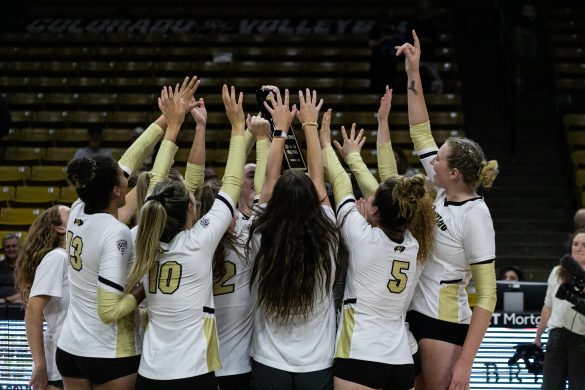 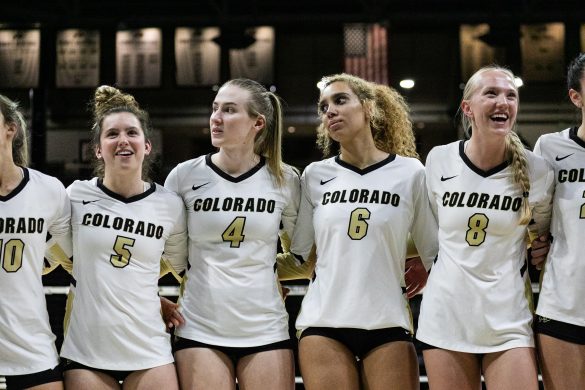 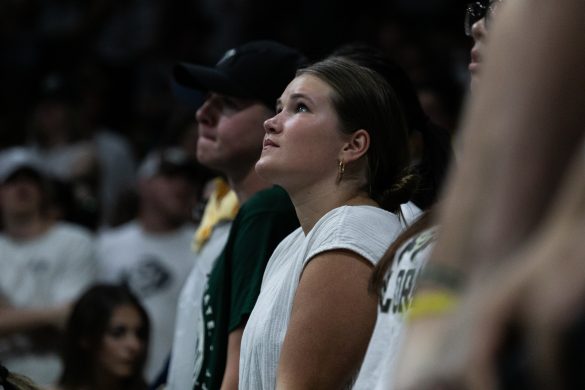 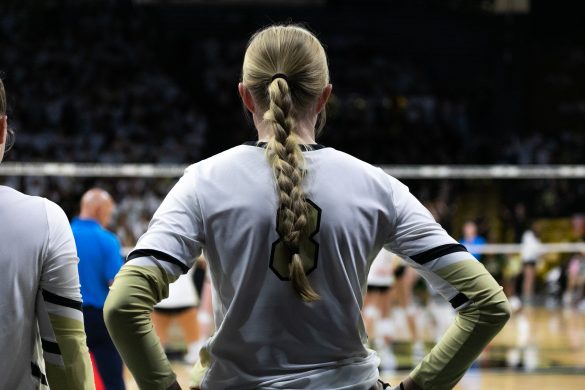 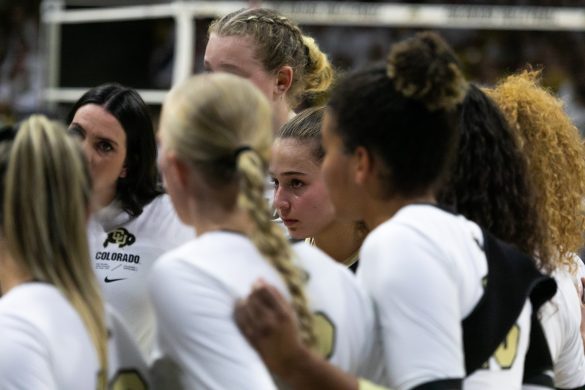 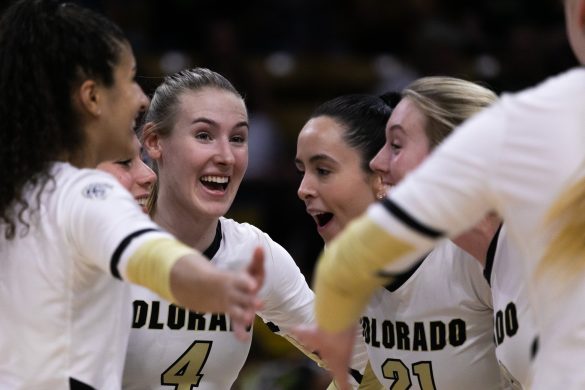 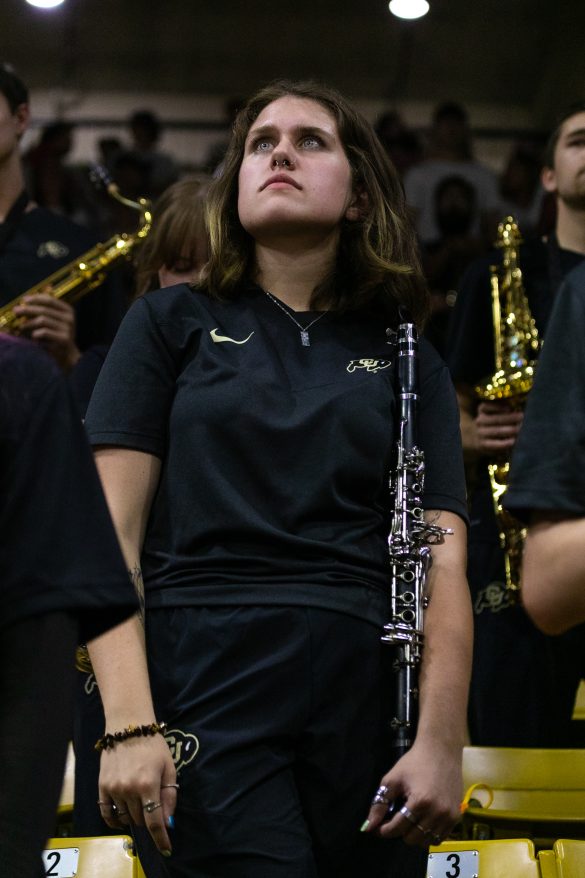 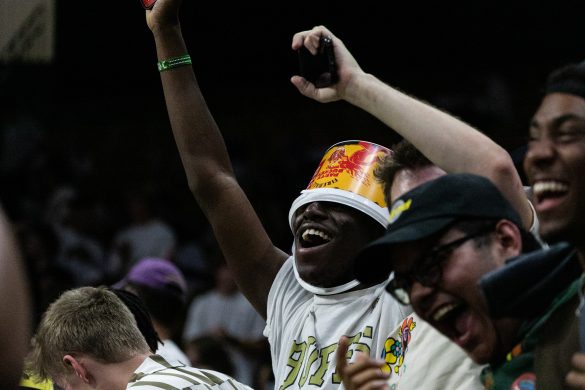 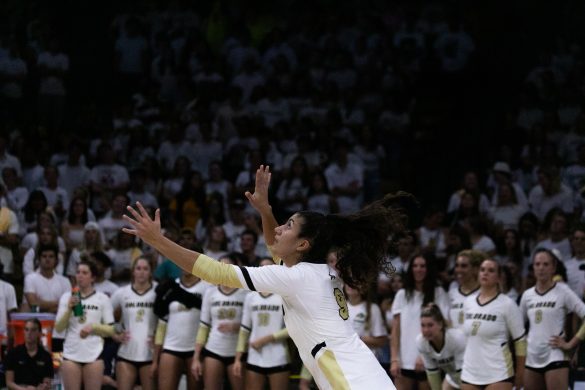 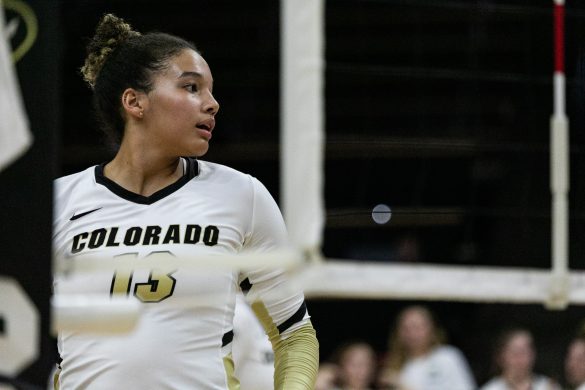 Vittorio Bongioanni is a journalism major, He is in his first year at CU Boulder, and therefore this is his first year with the CU Independent. He is a Brazilian with a passion for sports, languages and food.