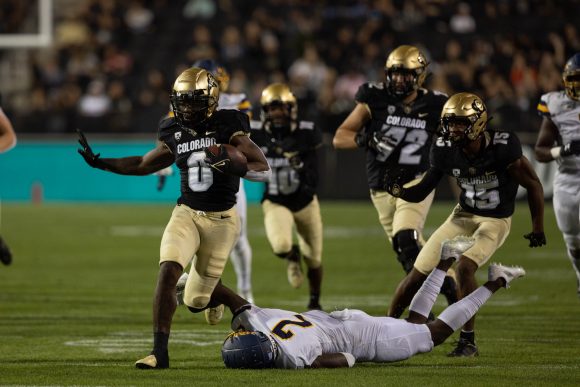 Freshman tailback Ashaad Clayton brings the ball down the field during the fourth quarter on Sept. 3, 2021. (Kara Wagenknecht/CU Independent)

The Colorado Buffaloes defeated the Northern Colorado Bears 35-7 in CU’s first game of the 2021 season. Although it was a scoreless game through the first quarter, head coach Karl Dorrell and his group of running backs led the team to a five-touchdown victory.

It was an impressive performance by the Buffs as they didn’t commit a turnover the entire game, just the second time Dorrell has had a turnover-free game as Colorado’s head coach.

It was a game full of debuts as three Buffs made their first career start and 17 others saw the field for the first time. Of those 17 players who made their debut in a Colorado uniform, 16 of them were underclassmen and 11 were true freshmen. Defensive Coordinator Chris Wilson also coached his first game leading the defense as his unit allowed just 20 rushing yards and one touchdown. Junior cornerback Mekhi Blackmon closed out the first half of the game with his second career interception.

“I thought coming off of injury for Chris Miller and Nate Landman they both played solidly,” Dorrell said. “I was really encouraged by their leadership. I think the communication, both in the backend and with what Nate does on the front seven was good. To see both of those guys back healthy and playing and without any ill effects was great.”

Adding to Colorado’s game resume, sophomore Jarek Broussard, junior Alex Fontenot, freshman Ashaad Clayton and sophomore Deion Smith all found their way into the end zone. It was the first time since 2015 that four different CU tailbacks scored in the same game. Broussard and Fontenot are both less than 100 rushing yards away from reaching 1000 career rushing yards after the home opener. CU’s starting quarterback and second-year freshman Brendon Lewis shared his thoughts on the talented tailback squad.

“It’s no surprise, every dude in the running back room is a dog,” Lewis said. “I wasn’t surprised to see every single one of them get into the endzone. They’re all really good at what they do.”

Along with the four touchdowns scored by Colorado’s running game, Lewis threw a 17-yard touchdown pass to freshman wide receiver Montana Lemonious-Craig in the second quarter. It marked the first regular season touchdown for each of the young player’s collegiate careers. Additionally, Colorado was perfect in red zone scoring as they scored all five times they passed UNC’s 20-yard line. 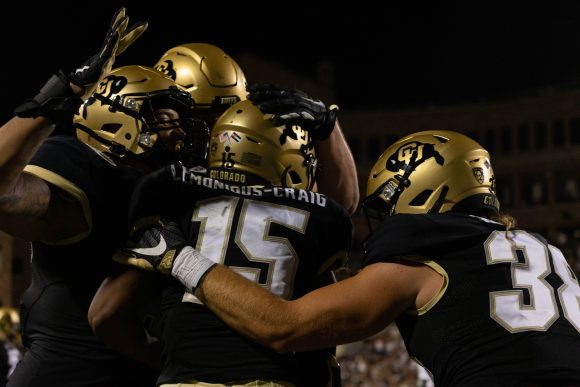 The Buffs celebrate with freshman wide receiver Montana Lemonious-Craig after Lemonious-Craig scored a touchdown during the second quarter on Sept. 3, 2021. (Kara Wagenknecht/CU Independent)

“I like getting everybody the ball,” Lewis said. “They’re all really good and our offense can be really good. We have a lot of weapons on our team and they’re good at what they do. I take pride in spreading the ball around and get everybody the ball. It felt good getting Montana (Lemonious-Craig) his first collegiate touchdown.”

“Our front seven was able to pressure them all day,” Blackmon said. “(UNC quarterback Dylan McCaffery) was probably not comfortable back there, (he) overthrew the ball and I made a good play on it.”