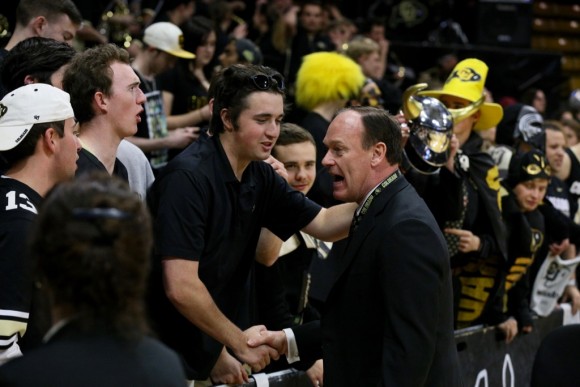 As the summer offseason continues across the NCAA, University of Colorado Boulder Athletic Director Rick George addressed the media on Thursday to address a variety of topics surrounding the state of CU athletics.

In particular, George provided his thoughts on coming out of a pandemic year, the Pac-12’s leadership change, CU Olympians, student-athletes taking advantage of name, image and likeness (NIL) freedoms and the future.

COVID-19 protocols are finally being lifted and life on campus is returning to relative normalcy. Nevertheless, George wanted to make it clear that the past year was especially difficult for CU student-athletes who already manage an intense workload between classes and their athletic commitments.

In addition, Colorado student-athletes posted their highest collective grade-point average since 1994 at 3.194.

“We had our best academic success that we’ve had in our history,” George said.

He added that the Buffs finished with at least a 2.9 GPA for the 14th consecutive semester. This marks an impressive statistic for the athletics program under George, who took over just 16 semesters ago.

The 2020-21 academic year, despite its challenges, ended with a series of impressive statistics. The Buffs’ soccer team reached the NCAA tournament for the sixth consecutive year, lacrosse reached the Pac-12 championship for the third straight season, men’s basketball returned to March Madness and football reached its first bowl game since 2016. And finally, Eduardo Herrera and Abby Nichols led the CU men’s and women’s track teams.

Despite finishing the year having operated at an approximate $18 million deficit, George was impressed with the overall outcome. He said the department has now been able to start bringing back people from furloughs and layoffs implemented last year.

“I feel really good about how we finished fiscally with no ticket revenue,” George said.

With a more traditional campus experience expected in the fall, George recently announced that sporting events will return to full capacity.

George added that he expects an “exciting home football season” after outlawing fans at Folsom Field for most of last season.

On the subject of the recent NIL changes, George said he was hopeful for the opportunity presented to student-athletes.

George foresees a smooth transition to accommodating the new NIL rules from a compliance perspective. The athletics department kickstarted the transition with beginning the  “Buffs with a Brand” program in June 2020 to help educate student-athletes on how to brand themselves. He also acknowledged that several student-athletes have already begun cultivating new partnerships.

Also discussed was the Pac-12’s leadership transition with George Kliavkoff, the former president of MGM Sports & Entertainment, being named president after Larry Scott vacated earlier this year. George said Kilavkoff brings knowledge and enthusiasm along with a strong background.

As institutions across the country adjust to a post-COVID world, George acknowledged that there will likely still be unforeseen changes as the academic year looms.