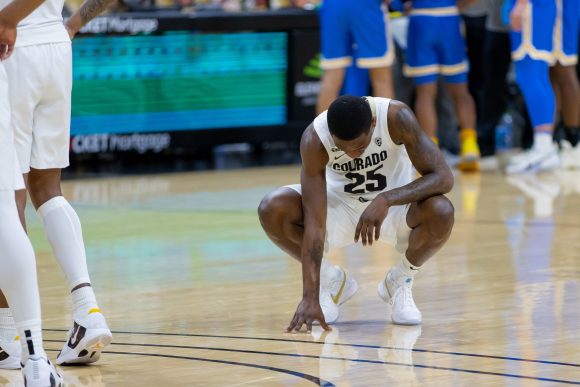 Senior guard McKinley Wright IV takes a moment to himself in between plays when the Buffs were losing. Feb. 27, 2021 (Casey Paul / CU Independent)

The University of Colorado men’s basketball team’s historic season came to an end on Monday night after losing to Florida State in a hard fought game in the second round of the NCAA tournament.

The game was played with heavy hearts as a deadly mass shooting in Boulder took place just hours before tipoff.

Behind a talented veteran roster and a supporting cast of solid underclassmen, the Buffs tied the third-most wins in program history with an impressive 23-8 record before dropping their final game of the year on Monday night in Indianapolis. Colorado entered its matchup with Florida State coming off of a dominant round one victory over Georgetown. The momentum didn’t carry over, however.

Against Georgetown, the Buffaloes shot an impressive 60.7% from the field and connected on 16-of-25 shots from behind the arch to score 96 points. Two days after setting a season-high for points scored, Colorado put up its second-worst offensive performance of the season with a mere 51 points.

“(Florida State) sped us up,” said senior guard McKinley Wright IV. “They did a really good job of denying and pressuring us. Their game plan was just to take me out of the game.”

The Buffs struggled early and often against Florida State to produce offensively, ultimately heading to halftime with only 20 points on the scoreboard. Despite this, Colorado was only trailing by four at the intermission, but things slowly unraveled from there.

Two Colorado starters and leading contributors, Wright and junior forward Evan Battey, faced serious foul trouble before the half which led to their subsequent benching. In their absence, other key players like senior forward Jeriah Horne and freshman forward Jabari Walker struggled to keep up with a Seminoles team that scored 47 in the second half.

On the night, CU shot a disappointing 35.7% from the floor while also turning the ball over 19 times. Head coach Tad Boyle took the blame for struggling to prepare the Buffs for Florida State’s length and constant pressure.

“This loss is on me,” Boyle said. “I don’t blame our players one bit. Their coach didn’t do a very good job tonight.”

The loss is a tough way for Colorado’s season to end, especially for the group of seniors and upperclassmen who had battled through so much in their four years with the program.  As the team captain and leader, Wright talked about what he and his teammates sacrificed to reach the second round of the tournament for the first time since 2012.

“I gave this university everything I had for four years,” Wright said. “I tried my best to win as many games as possible. I gave Colorado everything I had in me and it hurts to go out like this.”

The loss marks the end of an era in Boulder as it was Wright’s and senior guard D’Shawn Schwartz’s final game with Colorado, both of whom came from the highly respected 2017 recruiting class.

Though CU’s seven seniors are likely to go their separate ways this offseason and leave the program, Boyle noted that each of them has left a lasting impression on the CU community.

“All seven of our seniors are special, not just McKinley,” Boyle said.

The group’s NCAA tournament appearance expects to set the bar high for future classes while also garnering national exposure and respect for the program.