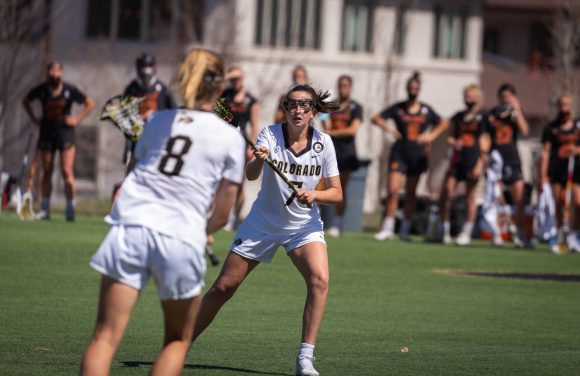 Following a comeback win against USC in the Pac-12 semifinals on Thursday, head coach Anne Elliott Whidden’s three-seeded University of Colorado lacrosse team lost to the one-seeded No. 13 Stanford Cardinal in the Pac-12 title game on Saturday.

Despite the loss, it still marked the Buffs’ third appearance in the Pac-12 Championship Game. CU has now played in all three Pac-12 title games, the only team to do so since the conference began sponsoring lacrosse in 2018.

Prior to the title game, Colorado received a first-round bye and faced the two-seeded Trojans on Thursday in the semifinal game after Oregon withdraw from the tournament due to COVID-19 protocols.

With USC leading 6-3 at halftime, the Buffs turned things around in the latter 30 minutes of play to beat the Trojans, 9-8. Senior attacker Sadie Grozier netted a hat trick while scoring her 100th career goal for the Buffs, and Pac-12 Defensive Player of the Year senior goalkeeper Julia Lisella had 10 saves.

The Buffs capitalized on man-up and free-shot opportunities as Pac-12 Midfielder of the Year Kelsey Huff was issued two yellow cards in the first half for USC. Grozier, who scored soon after one of Huff’s yellow cards, tied junior attacker Charlie Rudy to share the team lead for man-up goals scored this season at five.

A quick passing connection from junior midfielder Liz Phillips to freshman midfielder Morgan Pence less than one minute into the second half marked the beginning of CU’s comeback. A five-goal barrage, which was only interrupted twice, followed Pence’s goal to seal the semifinal win for the Buffs.

In the finals, the Buffs were faced with the challenge of an undefeated Stanford team. Phillips drew first blood, but a potent Cardinal offense quickly retaliated to take a commanding 10-4 lead at the end of the first half.

The deficit would prove too difficult to surmount for the Buffs, who’ve shown a tendency to get off to slow starts but rebound in the second half. CU was outscored 7-6 in the second half to give Stanford a 17-10 championship game victory. Grozier, however, continued to dominate with a career-high six goals.

Playing without Rudy, who suffered a season-ending knee injury in the Buffs’ regular season finale against No. 15 Denver on April 19, proved difficult for the CU offense. Rudy was responsible for at least one goal in every game this season and 45 goals total.

Saturday’s loss officially marked the end of the 2021 season for the Buffs, who finished at 8-7 with four games being canceled due to COVID-19 protocols. They did not receive an at-large bid to the NCAA tournament. Stanford, as a result of its Pac-12 title, received an automatic bid.

While several key players, including Grozier, have an added year of eligibility due to the 2020 campaign being cut short, it remains to be seen which CU seniors will return to Boulder next season.