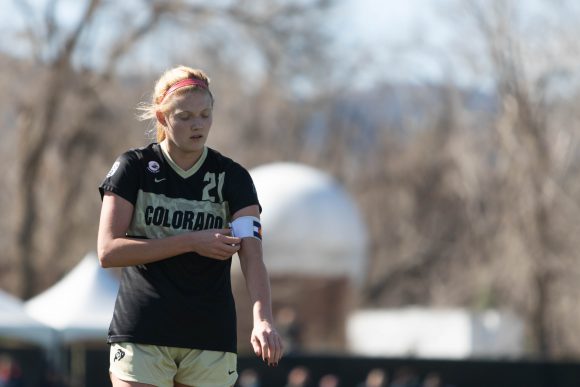 Junior defender Hannah Sharts fixes her captian armband during the second half at Prentup Field on April 9, 2021. (Kara Wagenknecht/CU Independent)

The 2021 season has been a journey for the University of Colorado soccer team. Due to COVID-19, its typical fall schedule was postponed until the spring. When the Buffs finally did play, they had the daunting challenge of playing only Pac-12 opponents. After falling to the bottom half of the Pac-12 standings, CU responded by rattling off a four game undefeated stretch to close out the regular season and secure an NCAA tournament bid.

But for every team except one, the journey eventually ends in disappointment.

On Tuesday, Colorado’s journey came to a screeching halt in the first round of the NCAA tournament against the University of South Alabama. The Buffs’ offense never quite looked comfortable and CU was unable to find an equalizer after a second half goal by the Jaguars’ Olivia “Tilly” Wilkes. The 1-0 loss at Macpherson Stadium in North Carolina dropped CU to 9-6-2.

Head coach Danny Sanchez had high praise for the Jaguars.

“We knew that they were a very good team,” Sanchez said. “They had some mixed results in the spring because they were kind of breaking in the new team. But over the 90 minutes, I thought they played very well. We didn’t do enough unfortunately to get a result tonight.”

On paper, the first round matchup between CU and South Alabama was a clash of teams with two opposing playing styles. The Jaguars were a team highlighted by strong offensive play which had produced the second most goals in the nation this season. The Buffs, on the other hand, had largely leaned on their staunch defense and sophomore goalkeeper Dani Hansen to suffocate opposing team’s offenses.

Early in the game, it appeared the Buffs would be the first team to strike a goal. In the 14th minute, the Buffs had their best scoring chance of the first half when a crossing pass from senior defender Haileigh Adams bounced off the cross bar and hit the head of sophomore forward Tessa Barton. Barton’s header shot sailed high and the game remained scoreless.

That early chance would prove to be the Buffs’ best opportunity of the first half. A scrappy South Alabama defense kept CU at bay through the first 45 minutes.

The Jaguars also struggled to get much going offensively with the Buffs’ defense doing what it has done all season: limit opponent opportunities.

In the second half, however, the bubble burst for CU’s defense.

With Pac-12 All-Conference First Team junior defender Hannah Sharts suffering an injury early in the second half, the Buffs became shorthanded on defense. Following a free kick for the Jaguars, Wilkes fired a crossing pass towards the goal. The ball missed the head of a South Alabama player and bounced past Hansen. The goal gave the Jaguars a 1-0 lead with 32 minutes remaining in the game.

Down by one, the Buffs spent the remainder of the game scrambling to create a goal. CU had a few close shots, including a header chance that went high from freshman forward Shyra James in the 83rd minute, but the Buffs couldn’t score.

With one minute left in regulation, the Buffs had one last hope to tie the game on a free kick just outside the box. Senior midfielder Shanade Hopcroft took the ball and hooked a shot towards the goal. The shot didn’t connect with the net as it banged hard off the top crossbar. Following that narrow miss, the final seconds ticked off the clock to secure CU’s demise.

Despite the loss, junior midfielder Kayleigh Webb reflected on the positive takeaways from the season.

“We are a young team and we are starting to mesh,” Webb said. “You could really see that going from the beginning games of preseason up to now. It took us a little to get a rhythm, but I really think that it came together at the very end.”