‘Truth to Power’: the power of art for social change 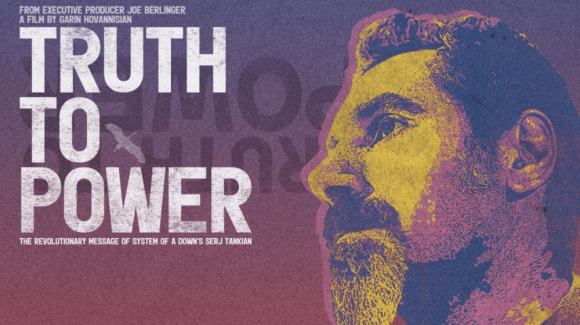 Most metalheads who were around during the late 2000s have the chorus of System of a Down’s B.Y.O.B. carved in their memory, “Everybody’s going to the party, have a real good time / Dancing in the desert, blowing up the sunshine.” Similar to the punk classic “Beach Party Vietnam” from a decade prior, System’s satire of the trivialization of the Iraq War strongly resonated with their audience and ended up winning them a Grammy in 2006. However, despite having produced many other politically-charged tracks, like “Soldier Side,” “Prison Song” and “Boom,” the band was primarily known for their unique, industrial sound, rather than their politicism.

Once the band went on hiatus in 2006, frontman Serj Tankian became a solo act, pivoting toward conceptual albums with political and environmental themes. The documentary “Truth to Power,” released Feb. 19, follows Tankian’s political activism through the System of a Down years and beyond and explores his role in the 2018 Armenian Revolution. Although the film is about Tankian’s activism, it treats the subject matter as a universal theme and pays tribute to the power of art in social change.

Garin Hovannisian, known for his critically-acclaimed debut film “1915” and his writings on the Armenian Genocide, is the director of “Truth to Power” and shares co-producer credit with Serj Tankian. Right before going to Armenia to join the revolution in 2018, Tankian contacted Hovannisian to have his journey documented. The film is mostly made up of this footage, as well as homemade clips from Tankian’s earlier career, exclusive interviews and Tankian’s own recordings. Despite being a patchwork of various content, the film comes together cohesively and carries an authentic and charming indie aesthetic.

Tankian has been vocal with anti-war messages for over two decades now, which sometimes came at a personal and professional price. Soon after 9/11, Tankian published a controversial essay on the band’s website without consulting the other band members. Although he called 9/11 a “horrific act of violence,” Tankian also pointed out the invasive US foreign policy as a potential motivator and called for peace in the Middle East, which was interpreted by the media as Tankian justifying the attack.  Soon after their album “Toxicity” climbed up to the top of the charts, Tankian’s criticism of the country during an unprecedented mass hysteria led to the band being banned from radio station playlists.

A year later, the band once again embraced a political stance with the anti-war anthem “Boom” and its iconic music video. While the band would produce multiple very successful, politically-charged tracks, “Truth to Power” describes how the disagreements about politicism in their lyrics caused internal conflicts between band members, which eventually led to their four-year hiatus from 2006 to 2010.

With the mainstream success of “Toxicity,” System of a Down became some of the most prominent Armenian-American figures in the popular culture and became representatives of their community. Starting with Tankian’s tour of Los Angeles’ Little Armenia, which kicks off the film, Tankian’s Armenian heritage is a major theme in his journey. In multiple instances, both the band members and interviewed Armenians emphasize how thrilling it was to see four Armenian kids having such accomplishments. Due to the cultural representation they carry and the memories of their survivor relatives, all band members were passionate about working towards the recognition of the 1915 Armenian Genocide by the United States, which would eventually happen in 2019.

The climax of the film comes with the coverage of System of a Down’s historic performance back in their homeland. In 2015, the band played a free concert in Yerevan to commemorate the centennial of the genocide. This concert ended up becoming a milestone for both Tankian as an activist and also for the nation of Armenia. Tankian would take the stage and speak truth to power, letting his audience know how he felt about the government, which would inspire many Armenian activists. Embracing his role as the voice of the dissent, Tankian began visiting Armenia often and getting involved in the 2018 election cycle. In 2018, election fraud which led to the ruling body’s victory sparked a peaceful protest that would lead to a nationwide uprising. The month-long resistance would later be called the 2018 Velvet Revolution and would eventually take the government down.

The latter half of “Truth to Power” follows the events that lead up to the revolution and explores Tankian’s direct involvement in-person and on social media. Many impactful scenes come from Tankian’s own camera and are far from professionally framed and directed. Yet, the homemade video feel of the at times shaky footage makes the latter half of the film come off very sincere and unfiltered.

Throughout “Truth to Power,” we watch an ordinary man from an immigrant family following his passion and finding commercial success, as well becoming a role model for an entire nation. Due to the conversational and casual approach of the film and Tankian’s demeanor, his extraordinary story comes off not as the biography of an outlier but as a casual, intimate story the audience can relate to. The film documents how the uniting power of music inspired a political leader to stand up for a better future and make history. It serves as a reminder, as in many ways most art does, how much we have in common as humans and the power of unity.